Brad Gushue’s final rock draw attempt in the 11th end came up about 20 feet short to allow Jeff Stoughton and his Manitoba team to escape Saturday with a 6-5 win over Newfoundland-Labrador in the second draw at the Tim Hortons Brier presented by SecurTek.

Newfoundland/Labrador vice-skip Brett Gallant reacts to a shot during his team’s loss to Manitoba on Saturday night. (Photos, CCA/Michael Burns)

In an almost unbelievable ending to the game between two veteran, world-class teams, both skips couldn’t even reach the house with their last-rock draw attempts. “You see two world-class skips throw draws to the four feet that end up 20 feet light, it’s embarrassing,” said a disappointed Gushue who is playing in his 11th Brier. “It’s unfortunate it came down to that. I have no idea what the hell happened.” 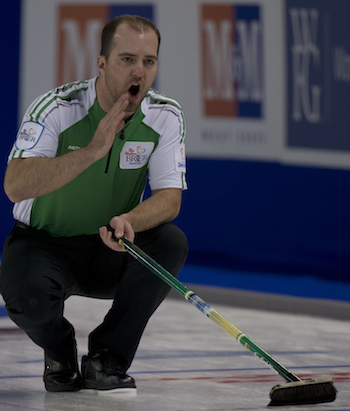 Stoughton, also in his 11th Brier, made a last-rock tap-back to score two in the 10th to force the extra end, where his team had shot rock buried behind cover with the final two stones to come. “We were going to draw half in the top four,” Stoughton said of his shot. “I let it go and the guys said good weight and it just ground in. To be 10 feet shorter than the guard I just threw was a little surprising. “Then he went a little wider and we thought maybe he’s going to be in better stuff out there. He lets it go, looks like he threw it hard and it had no chance to make even the house. To be 15 feet short? And mine, I was like 20 feet short. It’s too bad, but we’ll take it. We had one in there and he missed his last two shots.” On other sheets, John Morris of B.C. improved to 2-0 with a decisive 8-2 eight-end win over Jeff Currie of Northern Ontario, Greg Balsdon scored two in the 10th to win his first Brier game 9-7 over Jean-Michel Ménard of Quebec, and Steve Laycock of Saskatchewan made a last-rock tapback to score two in the 10th and beat Jamie Koe of Northwest Territories/Yukon 8-5. The results left B.C. and Manitoba at 2-0, Ontario and Saskatchewan at 1-0, Northern Ontario and Newfoundland-Labrador at 1-1, Alberta, New Brunswick, Nova Scotia, Northwest Territories/Yukon, Quebec and P.E.I. at 0-1. The hometown favourites, with Morris skipping and Kamloops native Jim Cotter throwing last rocks, had a relatively easy time against Jeff Currie and his Thunder Bay rink out of Northern Ontario. B.C. scored three in the second end and had a chance for three more in the fourth until Currie’s last rock double cut their steal to one. Morris and Cotter both made two excellent shots in the eighth to score three more and Currie shook hands. “The first one was a little tough on the melon so this was nicer,” said Morris. “We played better, a solid team effort and it was a little easier on us. We saw how Northern Ontario came out in their first game (a 13-5 win) and they’re a very strong team. I remember Jeff Currie from back in 1996. He had a great team and won the Canadian junior championship so we knew we were in for a fight. To be 2-0 after playing Alberta and Northern Ontario, you have to be happy with that.” 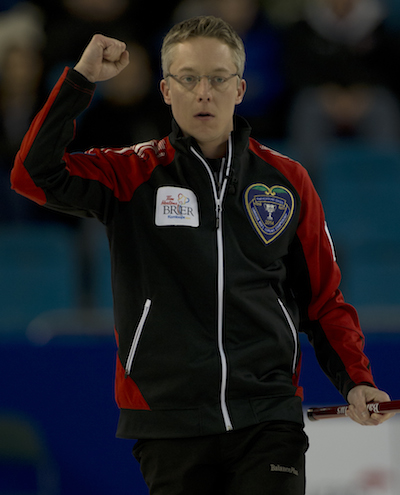 Cotter, who grew up in Kamloops and now lives in nearby Vernon, said the crowd support has been terrific. “It’s a ton of fun. Guys are playing really good. I feel I can play a little better yet…would like to execute a little better.” In the first draw earlier Saturday, B.C. nipped Kevin Koe of Alberta 7-6, Manitoba beat Eddie MacKenzie of P.E.I. 7-5, Newfoundland-Labrador beat James Murphy of Nova Scotia 7-2 and Northern Ontario whipped James Grattan of New Brunswick 13-5. There will be three draws Sunday, at 8:30 a.m., 1:30 p.m. and 6:30 p.m. (all times Pacific). All draws for the Tim Hortons Brier will be televised live on TSN/RDS 2, the official broadcasting partner of the Season of Champions. Live scoring is available at: www.curling.ca/scoreboard/?e=19 To purchase tickets to the Tim Hortons Brier, presented by SecurTek, go to: www.curling.ca/2014brier-en/tickets/ The French version of this story will be available at www.curling.ca/2014brier-fr/ as soon as possible.