Greg Balsdon and his Hamilton team are having a blast in their initial appearance in the Tim Hortons Brier, presented by SecurTek. 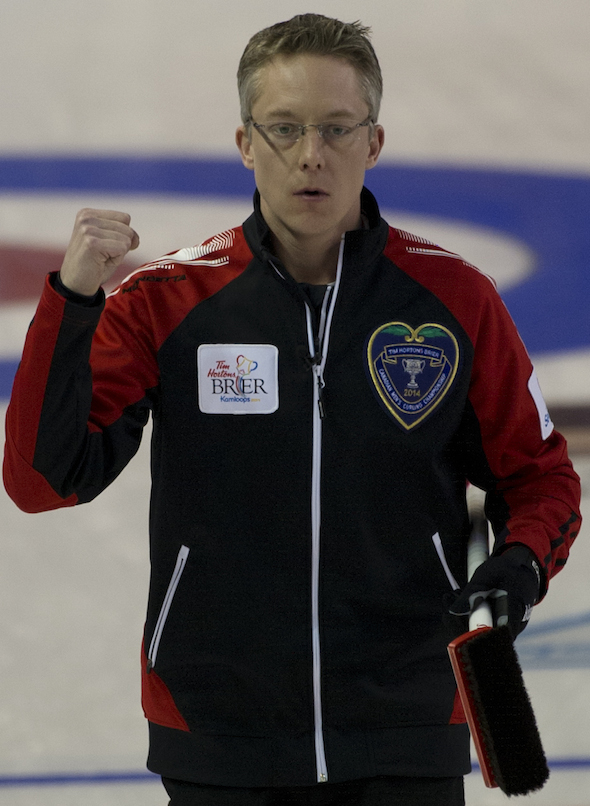 Ontario skip Greg Balsdon expresses his satisfaction with a shot during his win over Newfoundland/Labrador on Sunday. (Photos, CCA/Michael Burns)

The Brier rookie skip calmly drew the four-foot with his final stone in the 10th end to count two and knock off veteran Brad Gushue of Newfoundland-Labrador 7-6. It was Ontario’s second win and left the Balsdon foursome tied for second place at 2-1 behind unbeaten Jeff Stoughton of Manitoba. “Oh we’re having fun, it’s been a blast,” said the 36-year-old Balsdon, who lost earlier in the day 5-4 to Jamie Koe of Northwest Territories/Yukon. “We’ve been playing pretty well but the experience is nothing like we’ve ever curled before. I’m been to a couple of other Canadian championships and it’s nothing like this. The atmosphere, the people yelling, holding up signs all over the place. It’s way more electric here.” 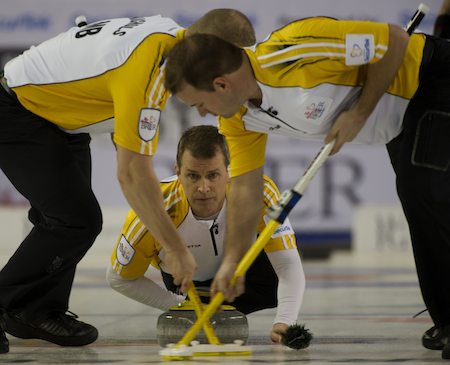 Some of that electricity Sunday afternoon was provided by Balsdon and his crew of third Mark Bice, second Tyler Morgan, lead Jamie Farnell, alternate Steve Bice and coach Jim Wilson. In a game filled with tension as both teams kept plenty of rocks in play, Ontario scored three in the fifth end to take a 4-3 lead and then got the deuce in ten for the win. Meanwhile Manitoba escaped a number of potentially dangerous situations to remain the only unbeaten team. Stoughton had a routine draw in the 11th end for a single to beat Koe 7-6 in a seesaw game that saw his Winnipeg foursome take advantage of costly missed shots by Koe to build a 4-2 lead but then run into struggles of their own. “We struggled with the speed this afternoon, (the ice was) definitely was a lot faster and a lot more curl,” said Stoughton. “We were missing too many draws heavy, but got it together late in the game.” In the other games, the home-province favourites skipped by John Morris gave up four in the first end and were never able to recover as Quebec, skipped by Jean-Michel Menard, kept the pressure on them for a 7-4 win and Saskatchewan outbattled Northern Ontario 6-4. The results left Manitoba at 3-0, Ontario, Quebec, B.C. and Saskatchewan at 2-1, Alberta and P.E.I. at 1-1, Newfoundland-Labrador, Northern Ontario and Northwest Territories/Yukon all at 1-2, and New Brunswick and Nova Scotia 0-2. 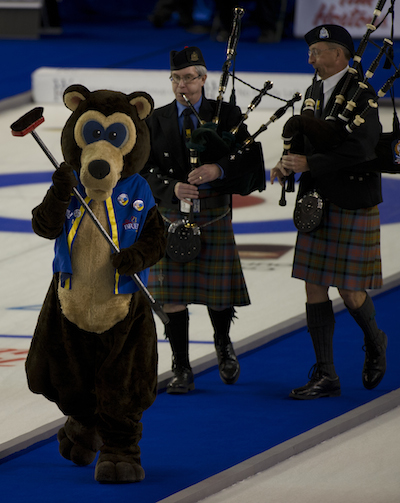 It’s not a Tim Hortons Brier without Brier Bear and the bagpipers!

Balsdon and his team were surprise entrants after knocking off perennial Ontario champion Glenn Howard and came into the Brier an unknown quality. But they showed through two days that they can play with the best. “We’ve had good battles with them,” Balsdon said of Gushue’s team of third Brett Gallant, second Adam Casey, lead Geoff Walker, alternate Jamie Korab and coach Peter Gallant. “We play in the same spiels as them. They’re a great team, Brad’s one of the best shooters in the world so pulling out a win against those guys we definitely feel fortunate.” A golf professional at the Glendale golf club, Balsdon wasted no time taking his final shot after Gushue’s final shot left him the opportunity for a deuce. “We were running out of time. Only had 30 seconds left,” he said. “We knew that was the shot. I knew I had a little bit of backing. I could kind of cheese-dog off my own or come to the back one if I’m a little heavy.” The Territories had opportunities to put Manitoba in a deep hole early but squandered their chances, especially in the fourth end. Koe was set up for a possible three ender but missed on both his shots, allowing Manitoba to steal one for a 3-2 lead. “That was a huge turn,” said Stoughton, who admitted he’s surprised to be the only unbeaten team after just three draws. “He jams one (rock); otherwise he gets a two or three and we’ll be chasing the rest of the game. Fortunate, we just had a terrible end and got a big break. I made my hit and stick and stole one so definitely the turning point.” All draws for the Tim Hortons Brier will be televised live on TSN/RDS 2, the official broadcasting partner of the Season of Champions. Live scoring is available at: www.curling.ca/scoreboard/?e=19 To purchase tickets to the Tim Hortons Brier, presented by SecurTek, go to: www.curling.ca/2014brier-en/tickets/ The French version of this story will be available at www.curling.ca/2014brier-fr/ as soon as possible.