Nothing is coming easy in the early stages of the Tim Hortons Brier presented by SecurTek. 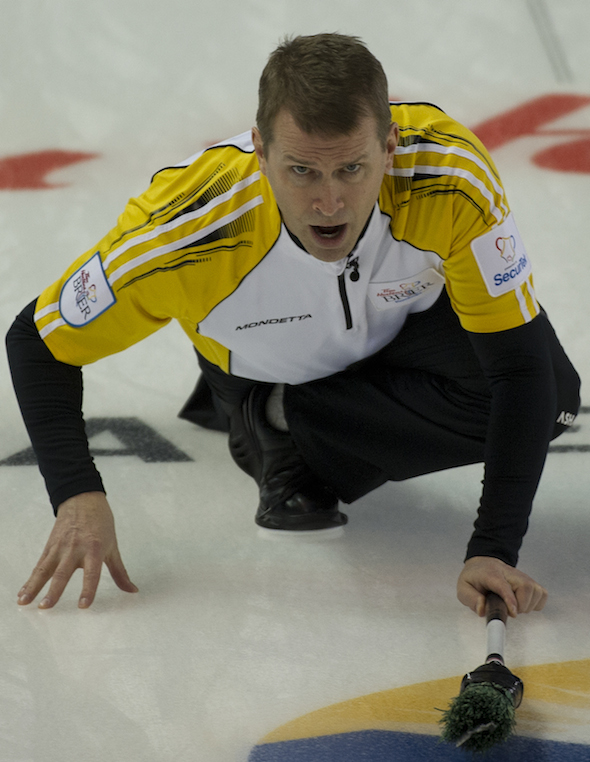 Manitoba’s Jeff Stoughton is the only unbeaten skip at 4-0 after five draws but he struggled to win his two games Sunday. He needed an extra end to nip Jamie Koe of Northwest Territories/Yukon 7-6 in the afternoon draw and scored five in the 10th end to get past a scrappy New Brunswick 9-5 in the evening.

“It’s interesting how some people think it’s an easy romp through this stuff,” said Stoughton, who’s backed up by third Jon Mead, second Mark Nichols, lead Reid Carruthers, alternate Garth Smith and coach Rob Meakin. “It’s not. Every team that’s out here, except maybe two, have a ton of experience and know what it takes to win these games. “There’s nothing out here that’s going easy. We’re making some good shots, we have a couple of bad shots so it’s not perfect, but we’re getting through and maybe the good part is we know we can get better. We just have to get better with putting the broom down and trusting it and making the shots.” Another of the pre-Brier favourites, John Morris of B.C., also had a struggle, giving up four in the second end — he’d given up four in the first end earlier in the day in a loss to Quebec — and needing a 10th-end big score to get past James Murphy of Nova Scotia. “If it wasn’t for a couple of four-enders today we would have had a half decent day,” Morris said after scoring three in the 10th for an 8-6 win. “That’s a character builder because we hung tough and really had to grind it out.” In the two other evening games, Kevin Koe of Alberta scored three in the first end en route to a 9-4, eight-end win over Brad Gushue of Newfoundland-Labrador, and Eddie MacKenzie and his P.E.I. team scored five deuces to beat Jeff Currie of Northern Ontario 10-7. The results left Manitoba at 4-0, B.C. at 3-1, Ontario, Alberta, P.E.I., Quebec and Saskatchewan all at 2-1 followed by Northwest Territories/Yukon at 1-2, Newfoundland-Labrador and Northern Ontario at 1-3 and New Brunswick and Nova Scotia 0-3. The James Grattan New Brunswick foursome had been outscored 23-6 in its previous two games but gave Stoughton all he could handle. Grattan scored two in the seventh and stole singles in the eighth and ninth to lead 5-4 going into the 10th. “Nothing like being down one coming home and having an open hit for a bundle,” said Stoughton. “It worked out OK. We had a really thin double in nine to take three and just paper-ticked it and didn’t get it out.” Morris took some of the blame for the four-ender against him and his team of third Jim Cotter, second Tyler Griffith, lead Rick Sawatsky, alternate Jody Epp and coach Pat Ryan, admitting he played the end a little too aggressively. “It was a little aggressive. I felt we deserved a two or three in the first end and we didn’t get it so I might have gone a little harder in the second and probably shouldn’t have.” 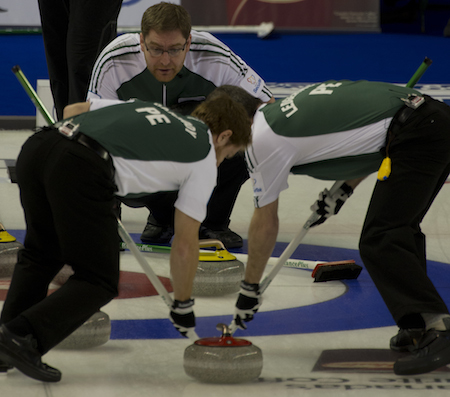 But there was no doubt about the final shot selection in the 10th, an angle raise takeout by Cotter, who throws fourth rocks. “That’s a shot where it’s a coin flip and you go with what your skip’s feeling and he was feeling that out-turn angle,” explained Morris. “We knew the spot real well so the last thing I’m going to do is talk him out of something he’s feeling good about so that’s why we went with it. There are only two draws Monday, beginning at 1:30 and 6:30 p.m. PT. All draws for the Tim Hortons Brier will be televised live on TSN/RDS 2, the official broadcasting partner of the Season of Champions. Live scoring is available at: www.curling.ca/scoreboard/?e=19 To purchase tickets to the Tim Hortons Brier, presented by SecurTek, go to: www.curling.ca/2014brier-en/tickets/ The French version of this story will be available at www.curling.ca/2014brier-fr/ as soon as possible.