They are the hometown favourites featuring Kamloops-born Jim Cotter, and Team British Columbia continued to give the crowds plenty of cheer about with a fourth straight victory Tuesday in the ninth draw at the Tim Hortons Brier, presented by SecurTek. 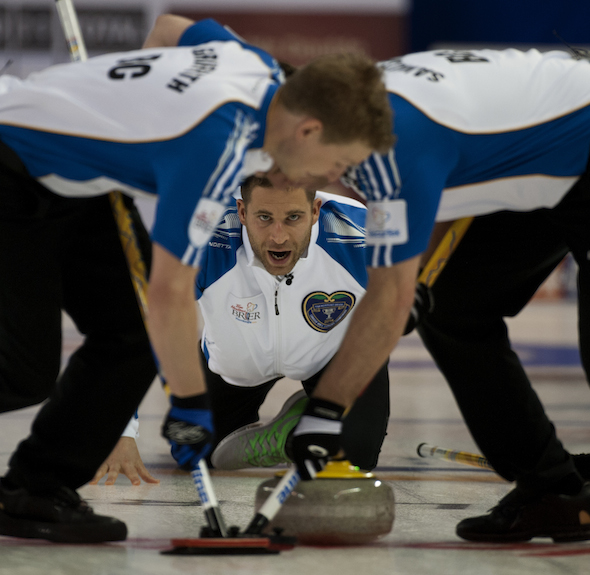 “We’re getting stronger and stronger,” skip John Morris said after B.C. rolled to a 9-3 win over James Grattan of New Brunswick to improve to 6-1. “We snuck some wins out early with some character-builders and now we’re starting to get a handle on the rocks, a real positive thing to see.” Perhaps nothing was more positive looking Tuesday than the shot-making of Cotter, who throws last rocks. He curled 91 per cent in the latest win but it wasn’t his percentage that stood out, but, rather, his clutch shooting. 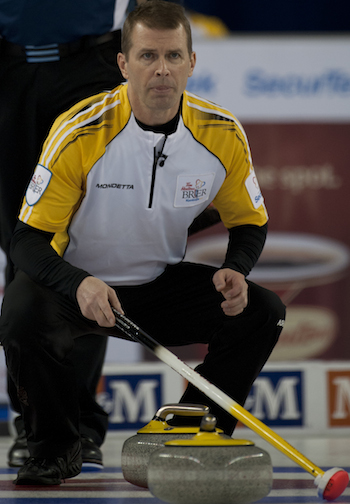 In the sixth end, with the game tied 3-3, he made a tough, last-rock triple kill for three to give B.C. control. Lead Rick Sawatsky, who has curled with Cotter for more than a decade, including four Briers, said he had no doubt the shot would be successful “No, not a doubt really,” said Sawatsky, a native of Sioux Lookout, Ont., “John knows the spot pretty well, it was just a matter of Jimmy throwing it really well and he just threw it pure. “He’s feeling it, you can tell. He’s throwing it a lot better, he’s getting his draw weight down pat and he’s made a lot of big shots for us the last couple of days. He’s been really clutch for us.” Other members of the B.C. team are second Tyrel Griffith, alternate Jody Epp and coach Pat Ryan. Grattan is joined by third Jason Roach, second Darren Roach, lead Josh Barry, alternate Andy McCann and coach Daryell Nowlan. In the other ninth-draw games, Kevin Koe and his Alberta foursome beat Jeff Currie of Northern Ontario 9-3, Jeff Stoughton of Manitoba got past Jamie Murphy of Nova Scotia 8-6 and Brad Gushue and his Newfoundland-Labrador unit stayed alive with an 8-5 win over Eddie MacKenzie of P.E.I. The results left B.C. alone at 6-1, followed by Alberta at 5-1, Manitoba 5-2, Saskatchewan 4-1, Ontario and Quebec at 3-2, P.E.I. 3-3, Newfoundland-Labrador 3-4, Northwest Territories/Yukon 1-4, Northern Ontario 2-5, New Brunswick 1-5 and Nova Scotia 0-6. Gushue, who has never won the Brier in 10 previous trips, kept alive his faint hopes with his bounce-back win after a gut-wrenching loss to Saskatchewan in the morning draw. “Win the rest and hope,” he said when asked what his team has to do after four losses. “That fourth loss was a punch in the gut … you can’t afford to lose anymore. It’s a real long shot but at least it’s still a shot.” 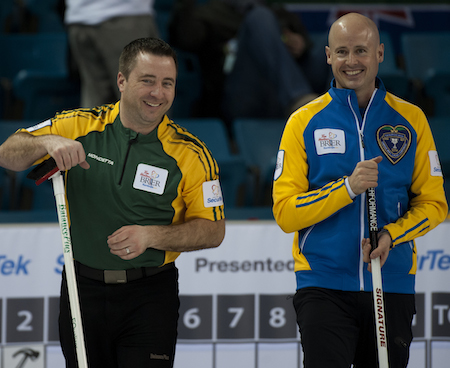 He was up 6-2 after scoring four in the fourth end but couldn’t relax until running P.E.I. out of rocks in the 10th. “I found it challenging in that game to really stay focused,” Gushue admitted. “I think it will be easier tomorrow. We were still dwelling on the loss. Now that we have a win and a night off I think tomorrow morning will be easier to come back and be focused.” In the 6:30 PT draw Ontario plays P.E.I, Quebec plays New Brunswick, Alberta meets Saskatchewan and Nova Scotia takes on Northwest Territories/Yukon. All draws for the Tim Hortons Brier will be televised live on TSN/RDS 2, the official broadcasting partner of the Season of Champions. Live scoring is available at: www.curling.ca/scoreboard/?e=19 To purchase tickets to the Tim Hortons Brier, presented by SecurTek, go to: www.curling.ca/2014brier-en/tickets/ The French version of this story will be available at www.curling.ca/2014brier-fr/ as soon as possible.