John Morris and his B.C. team scored two in the eighth end and stole three in the ninth to subdue a stubborn Eddie MacKenzie’s P.E.I. foursome 10-4 Monday evening to move into a tie for top spot after seven draws at the Tim Hortons Brier, presented by SecurTek. 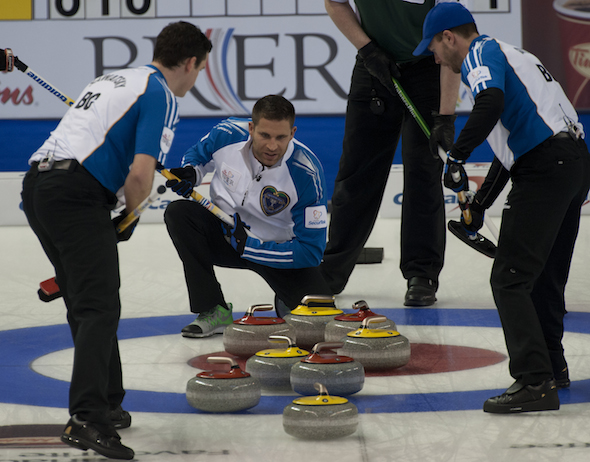 “That was probably our best team game of the event so far,” said an obviously pleased Morris. “A really good team effort. All around, our most solid game so far.” When Kevin Koe of Alberta knocked Jeff Stoughton and his Manitoba rink 10-4, it created a three-way tie atop the standings with Alberta, Manitoba and B.C. all at 4-1. 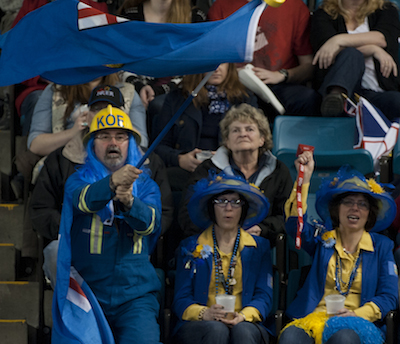 In the other evening games, Jeff Currie of Northern Ontario beat James Murphy of Nova Scotia 9-6 and Brad Gushue of Newfoundland-Labrador kept alive his Brier hopes with a last-rock 9-7 win over James Grattan of New Brunswick. After the top three in the standings, Saskatchewan is at 3-1, P.E.I. at 3-2, Ontario and Quebec 2-2, Newfoundland-Labrador and Northern Ontario 2-3, Northwest Territories/Yukon 1-3, New Brunswick 1-4 and Nova Scotia 0-5. While the final score for Morris and his team of third Jim Cotter, second Tyrel Griffith, lead Rick Sawatsky, alternate Jody Epp and coach Pat Ryan was convincing in the end, the game was not an easy one. “We had to earn that one,” said Morris. “We knew how well Eddie and his team were playing. They’ll definitely have more wins in them this week.” B.C. and P.E.I., with MacKenzie joined by third Anson Carmody, second Tyler MacKenzie, lead Sean Ledgerwood, alternate Phillip Gorveatt and coach Les Rogers, traded singles in the first and second ends. With Morris and Cotter, the Kamloops third who throws last rock, both right on with their shots, B.C. took command of the game in the middle ends, scoring deuces in the fourth and sixth ends for a 5-2 lead. 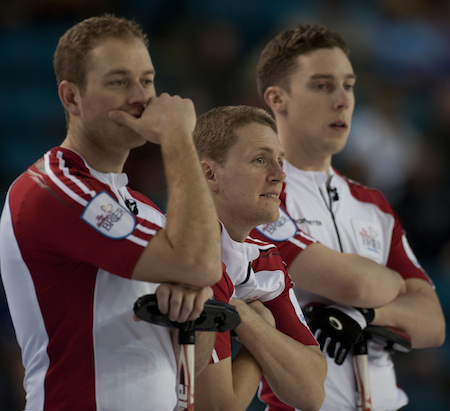 Cotter made a delicate tapback for the two in four and had an open draw in six when MacKenzie got a nose hit on an attempt at a wide double takeout. “We were just trying to be more patient because the last few games we’ve given up a four early so we just wanted to have a more patient game plan and not really force the issue too much and that worked for us,” said Morris. Koe, who won the Brier and world titles in 2010, was dictating much of the play against Stoughton from early on. After trading singles in the first two ends, Alberta scored three in the third to take control. “We missed four in a row in the end and you just can’t do that,” said Stoughton, who curled a team-low 78 per cent. “That’s disappointing to give them an easy one like that.” Even after the Stoughton misses, Koe almost failed to take advantage when his draw nicked a guard out front but was saved by his sweepers. “They were calling heavy all the way so when you have good communication like that you have chances to make shots even if it’s a little off. Pat (Simmons) called it perfect, we got a little rub and got in there and that was a big point.” Although he gave back two in the fourth end, Koe and his foursome kept the pressure on Stoughton in almost every end. The game ended in the eighth when Stoughton tried and missed a desperation long angle raise to try to get at three Alberta counters in the four-foot. “We thought we had to give it a shot to score,” said Stoughton. “We could have drawn in there and given them another point but three down usually means you’re gong to get two in nine then you have to steal 10, 11. If we at least score in eight then force nine, we might be able to get two in 10 and only have to steal in 11.” After just two draws Monday the Brier now reverts to three draws daily. Tuesday draws begin at 8:30 a.m., 1:30 and 6:30 p.m. (all times PT). All draws for the Tim Hortons Brier will be televised live on TSN/RDS 2, the official broadcasting partner of the Season of Champions. Live scoring is available at: www.curling.ca/scoreboard/?e=19 To purchase tickets to the Tim Hortons Brier, presented by SecurTek, go to: www.curling.ca/2014brier-en/tickets/ The French version of this story will be available at www.curling.ca/2014brier-fr/ as soon as possible.