Jeff Stoughton missed his last rock tapback attempt Tuesday to allow Quebec to steal two in an extra end for a 9-7 win that knocked Manitoba out of first place after eight draws at the Tim Hortons Brier presented by SecurTek. 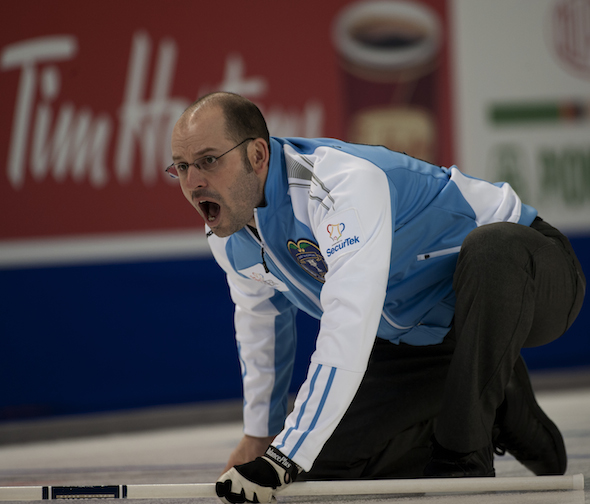 Quebec skip Jean-Michel Ménard had drawn to shot rock with his final stone and Stoughton, who had flirted with losses on a couple of his earlier games, elected to try a straight tapback of his own stone to get the single that would given him victory, but his shot just overcurled to leave the two Quebec counters. “I just had to hit it a little high on the nose side … tap it to the button. I slid a little wide and poked it back too much,” Stoughton said of the shot that resulted in his second straight loss after four wins. 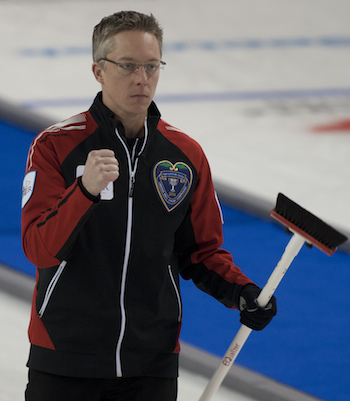 “It’s disappointing since we had it in our hands and I couldn’t make the last one.” That loss dropped Manitoba to 4-2 and left John Morris alone in first place at 5-1 after his B.C. team cracked four in the eighth end to get past Jamie Koe of Northwest Territories/Yukon 7-2. In the other games Steve Laycock of Saskatchewan beat Brad Gushue of Newfoundland-Labrador 7-6 and Greg Balsdon of Ontario scored three deuces to beat Jeff Currie of Northern Ontario 8-5. Alberta and Saskatchewan are 4-1, Manitoba 4-2, Ontario, Quebec and P.E.I. 3-2, Northern Ontario and Newfoundland-Labrador 2-4, New Brunswick and Northwest Territories/Yukon 1-4 and Nova Scotia 0-5. Ménard had jumped into a 4-0 lead in the first end but Manitoba rallied with two in the second and steals of two in the third and one in the fourth to lead 5-4. “We got off to a red-hot start, thought we were in control,” said Ménard. “Jeff made a couple of good calls in the second end to generate a deuce. A little strategy mistake in the third cost us two points and we felt the momentum was shifting.” Quebec blanked two ends, scored a single in the seventh and the teams traded deuces in the eighth and 10th to send the game to an extra end. After falling behind after the fourth, Menard said he, third Martin Crête, second Éric Sylvain, lead Philippe Ménard, alternate Pierre Charette and coach Bob Ménard decided to play a simpler game “and were able to generate a nice deuce in the last end. 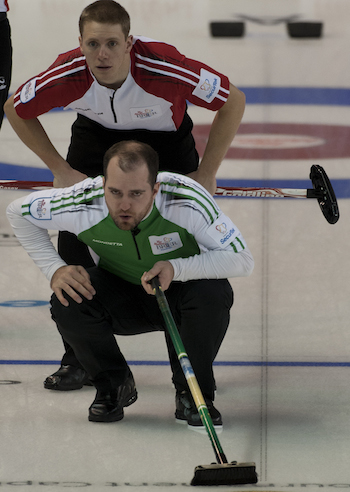 “Overtime was basically trying to put the rock in the best spot possible so Jeff would have a chance to miss and I guess it ended up in the right spot,” he said of his final draw. “He just had to push the red rock about six inches to be shot so I thought he would play out turn and just tap the rock to centre. I guess he wasn’t feeling comfortable with that shot and preferred to play the runback.” Meanwhile, B.C. played another patient game until posting the four-ender to beat Koe. Kamloops native Jim Cotter, who plays third and throws last rock, said the team is all “feeling a little more comfortable. You want to build on (the wins) and that’s how it feels right now.” The 39-year-old was informed before the game he had been elected into the Kamloops Hall of Fame to join his father there. He then promptly went out and made a lot of key shots to lead his rink of Morris, second Tyrel Griffith, lead Rick Sawatsky, alternate Jody Epp and coach Pat Ryan to the win. In the afternoon draw New Brunswick takes on B.C., P.E.I. meets Newfoundland-Labrador, Manitoba tangles with Nova Scotia and Northern Ontario plays Alberta. All draws for the Tim Hortons Brier will be televised live on TSN/RDS 2, the official broadcasting partner of the Season of Champions. Live scoring is available at: www.curling.ca/scoreboard/?e=19 To purchase tickets to the Tim Hortons Brier, presented by SecurTek, go to: www.curling.ca/2014brier-en/tickets/ The French version of this story will be available at www.curling.ca/2014brier-fr/ as soon as possible.