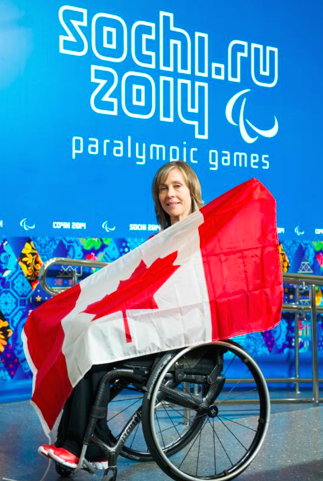 “Being chosen to be the flag bearer for the Canadian Paralympic team is an incredibly huge honour,” stated Gaudet. “I have so many emotions going on in my mind right now and they are all good!” Gaudet has a keen interest in accessibility issues in her community of Vernon and works hard to share her experience and knowledge to create new recreational opportunities for people with mobility challenges. She is an ambassador with the Rick Hansen Foundation and the Canadian Paralympic Committee where she uses the power of sport and her experience of overcoming challenges to motivate and inspire people of all ages. “I am so excited to enter the stadium at the opening ceremony with my Canadian wheelchair curling teammates and to be representing all of my fellow Canadian Paralympic athletes here at the Games and across Canada,” Gaudet said. “I hope to lead by example and send a message of ability and not disability. And that it’s not about what’s missing, it’s about what’s there.” “Canada has had many amazing athletes proudly carry our flag into the opening ceremonies of the Paralympic Games, and the announcement of Sonja Gaudet as our 2014 Paralympic Winter Games Flag Bearer is a continuing legacy of excellence,” said Team Canada Chef de Mission Ozzie Sawicki. “Sonja has impeccable performance credentials, at all levels, including Paralympic Games and World Championships, entering these Games as a defending Paralympic gold medallist and the reigning world Champion. Sonja is also an influential spokesperson within the parasport community in Canada and conducts herself with exceptional professionalism. A true team player, Sonja will represent our country with pride as she leads our 2014 Canadian Paralympic Team into the opening ceremonies in March 7.” Selection criteria for the flag bearer for the Opening Ceremony require that the athlete have previous international experience competing for Canada, exhibit a commitment to fair play, be respected as a role model by other athletes, maintain an exemplary standard of behaviour as per the True Sport Values and have made a contribution to the sporting community in Canada and/or internationally. “The Canadian Curling Association (CCA) is thrilled with Sonja’s selection as flag bearer for the Paralympic opening ceremonies in Sochi,” said CCA Chief Executive Officer Greg Stremlaw. “She has been a marvellous ambassador for the sport of curling, both on and off the ice, and has worn the Maple Leaf with pride for us around the world. We can’t wait to see her leading Team Canada into the stadium during the ceremonies.” For full information about Team Canada at the Sochi 2014 Paralympic Games, please visit www.paralympic.ca/team-canada.