Junior men finish just off the podium in Switzerland

Canada’s Braden Calvert came up just short in the final end of the bronze medal game at the 2014 World Junior Curling Championships in Flims, Switzerland, losing 7-5 to Norway’s Eirik Mjoeen and finishing in fourth place, just out of the medals. “We’re disappointed with our play today and know we can play better,” said Calvert after the loss. “We’re hungry for more. We just got out of the starting gate a little slow today and picked it up late, but not soon enough.” 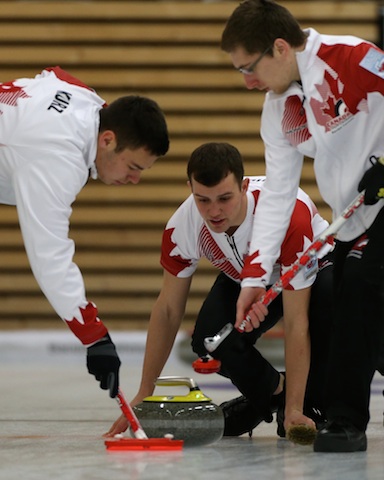 Trailing 4-1 after the break, Calvert and his Winnipeg team of Kyle Kurz, Lucas Van Den Bosch, Brendan Wilson, alternate Matt Dunstone and coach Tom Clasper rallied with two in the eighth and then crept even closer with a steal of two in the ninth to tie it up 5-5 heading to the 10th. Without hammer, and facing two Norwegian counters, Calvert came up just short on his final freeze attempt. “I think in every end you have a chance and we were trying to be optimistic about it and it just didn’t fall into place,” he said. Canada earned a spot in the playoffs after winning five straight to finish the round robin in third place with a 6-3 record. A loss in the Page 3-4 playoff sent them to the bronze medal game against Norway, who had finished in first place after the round robin. “I think the team really battled hard,” said Calvert about the overall experience in Flims. “I learned a lot about the team and what we’re capable of, and I know if we have another chance at this we definitely put in our best effort and I think we could have won this thing.” “We’ll definitely be hungry for next year,” he said. “We’re looking forward to it, and we have a lot of positives to take out of this week.” In the other men’s final, Switzerland’s Yannick Schwaller won the gold medal with a 6-5 win over 2013 junior men’s champion Scotland’s Kyle Smith. Earlier in the day, the Canadian women – skip Kelsey Rocque, third Keely Brown, second Taylor McDonald, lead Claire Tully, alternate Alison Kotylak and coach Amanda-Dawn Coderre – defeated South Korea 6-4 to win the gold medal, the first gold for Canadian junior women since 2003. News, live scores and galleries can be found on the event website: https://wjcc2014.curlingevents.com Facebook: https://www.facebook.com/WorldJuniorCurlingChampionships Twitter: @worldcurling and @WCFmedia Twitter Hashtags: #WJCC2014 #curling The World Curling Federation (WCF) is the international sport federation governing the Olympic winter sport of curling and the Paralympic winter sport of wheelchair curling. The WCF is one of seven International Sports Federations currently part of the Winter Olympic programme. It represents 53 Member Associations and is generally acknowledged to direct one of the fastest-growing international winter sports. www.worldcurling.org