Koe's Alberta squad on a roll at Tim Hortons Brier

In his previous two visits to the Tim Hortons Brier, this year presented by SecurTek, Kevin Koe has never taken the easy route to victory, even when he won the event in 2010. But he took a big step towards that possibility Tuesday evening. 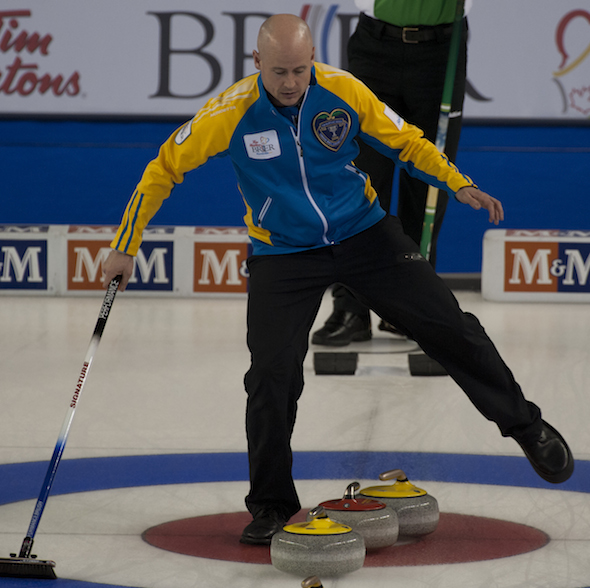 Alberta skip Kevin Koe shows some fancy footwork in the house during his team’s win over Saskatchewan on Tuesday night. (Photos, CCA/Michael Burns)

“This is our third Brier and we’ve never been in that Page one-two game, so it would be nice to get there.” the Calgary skip said after beating Saskatchewan 8-6 in the 10th draw to move into a tie for top spot with British Columbia at the Interior Savings Centre in Kamloops. “We’re used to doing it the hard way, in the three-four game, so if you can stay at the top of the leaderboard for most of the way that’s what you want to do.” Koe, third Pat Simmons, second Carter Rycroft, lead Nolan Thiessen, alternate Jamie King and coach John Dunn had a tough outing against Saskatchewan but they made more of the key shots than Steve Laycock and his Saskatoon foursome.

“Other than I missed one bad one we made all the important ones,” conceded Koe. “That’s kind of what you have to do. We put a bit of pressure on them a couple of times to get the one steal (two in the ninth end).” Alberta jumped on Saskatchewan misses to score deuces in the third and fifth ends and to steal one in the sixth and two in the ninth that killed the hopes of skip Steve Laycock, third Kirk Muyres, second Colton Flasch, lead Dallas Muyres, alternate Matt Lang and coach Lyle Muyres. “The real problem was we had lots of chances in that ninth end to set up a two and were just heavy on a few hit and rolls and taps and stuff and didn’t get rocks in position,” said a subdued Laycock. “That was disappointing because we played a real nice shot in eight to get them down to one. “We needed a couple more mistakes from them and didn’t get it.” In the other evening games, Greg Balsdon of Ontario beat Eddie MacKenzie of P.E.I. 8-3, James Grattan made a clutch last-rock raised tapback for two in the 11th end to nip Jean-Michel Menard of Quebec 10-8 and Jamie Koe of Northwest Territories/Yukon rolled to a 7-4 win over Nova Scotia’s Jamie Murphy. The results left B.C. and Alberta atop the standings at 6-1. Manitoba is 5-2 followed by Ontario and Saskatchewan 4-2, Quebec 3-3, Newfoundland-Labrador and P.E.I. at 3-4, Northwest Territories/Yukon 2-4, Northern Ontario and New Brunswick 2-5 and Nova Scotia 0-7. 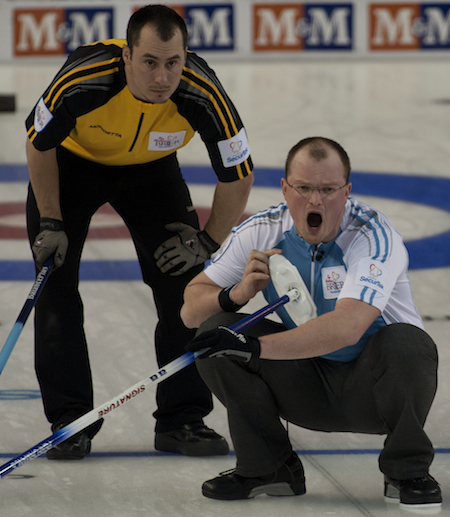 Balsdon and his rookie Ontario foursome kept themselves in the playoff mix with their easy victory, although they have a tough schedule ahead of them. “We’ve got a tough stretch coming up,” agreed Balsdon. “We’ve got Johnny Mo (British Columbia), Saskatchewan, Manitoba, Alberta our next four games. If we could even split those games, end up 6-4 heading into the last draw, I think we would take it.” It’s nice, he said, not having to rely on help from other rinks. “It’s nice to have it in your own hands, at this point. We’re playing well, our two losses we ran into two hot skips … but we’re feeling pretty good.” There are three draws Wednesday beginning at 8 a.m., 1 and 6:30 p.m. (all times PT). All draws for the Tim Hortons Brier will be televised live on TSN/RDS 2, the official broadcasting partner of the Season of Champions. Live scoring is available at: www.curling.ca/scoreboard/?e=19 To purchase tickets to the Tim Hortons Brier, presented by SecurTek, go to: www.curling.ca/2014brier-en/tickets/ The French version of this story will be available at www.curling.ca/2014brier-fr/ as soon as possible.