KAMLOOPS — British Columbia took sole possession of first place Wednesday – at least temporarily – while Manitoba improved its bid for a playoff berth at the Tim Hortons Brier, presented by SecurTek. 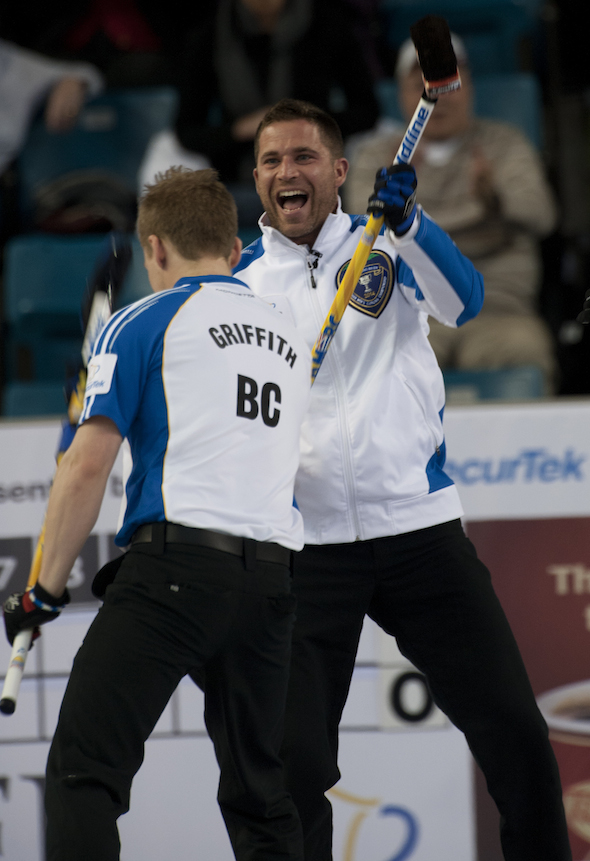 John Morris and his Vernon/Kelowna foursome scored five in the third end to roll past Ontario 8-3 while Jeff Stoughton of Winnipeg got deuces in the first and eighth ends to get past Saskatchewan 7-4. In other games in the 12th draw, Brad Gushue of Newfoundland-Labrador scored four in the 11th end to beat Jean-Michel Ménard of Quebec 10-6 and Jamie Koe and his Northwest Territories/Yukon crew kept alive their faint playoff hopes by scoring two in an extra end for a 7-5 win over Jeff Currie of Northern Ontario. 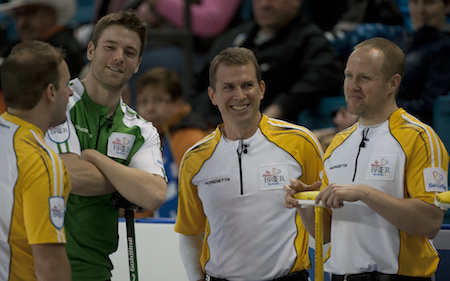 The results left B.C. at 8-1 and assured of at least a tiebreaker berth, followed by Alberta, which didn’t play in the afternoon draw, at 7-1, and then Manitoba at 7-2. While those three began to position themselves atop the standings, lurking close behind them is Ontario and Saskatchewan with 4-3 records. Koe and Menard are still alive with 3-4 records while Gushue follows at 4-5, New Brunswick and P.E.I. are 3-5, Northern Ontario is 2-7 and Nova Scotia winless in eight games. The key game in the 6:30 p.m. PT 12th draw sees Alberta take on Ontario. “It’s amazing what a great team dynamic can do,” Morris said in explaining the success of his team that includes third Jim Cotter, who throws fourth stones, second Tyrel Griffith, lead Rick Sawatsky, alternate Jody Epp and coach Pat Ryan. “When you trust each other and work hard together you can accomplish a lot of things.” And, he added, he’s not concerned about the pressure of the playoffs and playing at home. “We’ve already had a bit of heat,” he said. “If you can handle the heat of the Olympic Trials, which is the most heat of the entire season for pressure, then you can handle a hometown Brier. That was a good test for us in Winnipeg. We’ve trained mentally all season and we won’t do anything different this weekend.” Cotter executed perfectly an extremely difficult draw-weight, come-around tap back with his final stone to remove an Ontario rock from the middle of a pile of B.C. rocks to give the Morris crew five in the third end. 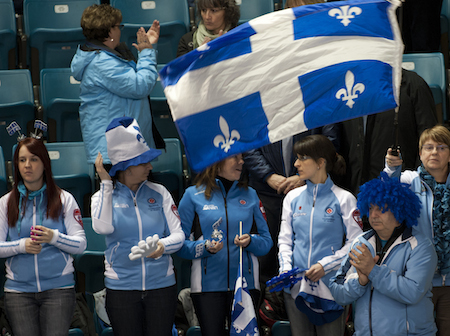 Quebec fans cheer on the Jean-Michel Ménard team during their game against Newfoundland/Labrador on Wednesday.

“That was exciting because it was one of those where it was a really tough shot, a crowd pleaser and a big lift for our team,” said Morris, who had high-fives for his teammates immediately after the shot. The pivotal end for Stoughton and his team of third Jon Mead, second Mark Nichols, lead Reid Carruthers, alternate Garth Smith and coach Rob Meakin was a deuce in the eighth end. “That was really big,” said Stoughton, who rubbed a guard but still got to where he needed. “A little thinner than we wanted but it managed to sneak though the hole. I knew I wanted to make sure I was thinner, just to make sure we scored a point. If I kick my one in the four-foot they’re probably going to steal one and we didn’t want to do that.” Stoughton and Morris meet each other in Thursday morning’s 14th draw in a game that could determine the participants in the Page playoff 1-2 game. “We’ll be gunning hard for that 1-2 game,” said Morris. “If we win tomorrow morning, we’re in the 1-2 game so we’ll be working real hard for that win.” All draws for the Tim Hortons Brier will be televised live on TSN/RDS 2, the official broadcasting partner of the Season of Champions. Tonight’s coverage will follow the Toronto-NY Rangers NHL game. If the NHL game goes long, Brier coverage will begin on TSN.ca, then switch to TSN after the game. Live scoring is available at: www.curling.ca/scoreboard/?e=19 To purchase tickets to the Tim Hortons Brier, presented by SecurTek, go to: www.curling.ca/2014brier-en/tickets/ The French version of this story will be available at www.curling.ca/2014brier-fr/ as soon as possible.