KAMLOOPS — Kevin Koe and his Alberta rink continued to pile up the points Wednesday, scoring a 10-5 victory over Ontario that moved them into a tie for top spot after 13 draws at the Tim Hortons Brier, presented by SecurTek. 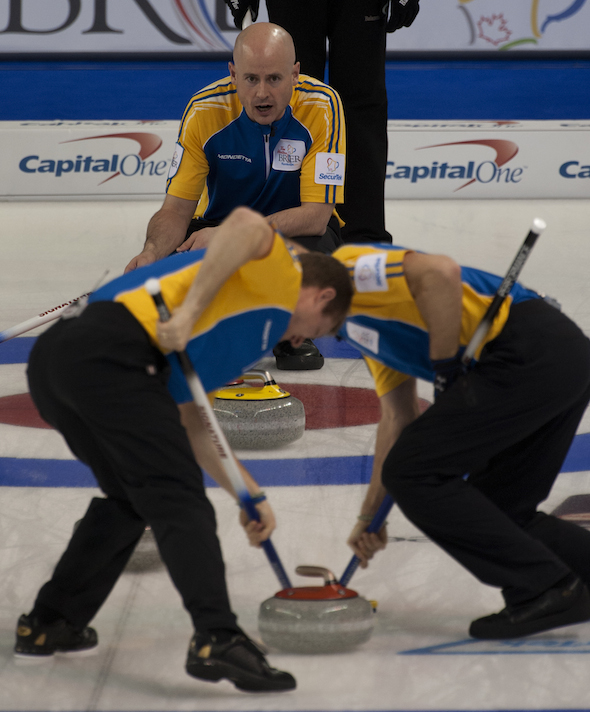 Although the score was convincing, it was a little misleading. Alberta scored two in the first end, then got a stunningly perfect draw from Koe for three in the sixth and got two in the ninth and final end when Ontario skip Greg Balsdon flashed on a double kill that would have given his team two but instead let Alberta steal a deuce. The win moved Alberta to 8-1 while the loss dropped the rookie Ontario rink back into the chase for a playoff berth. 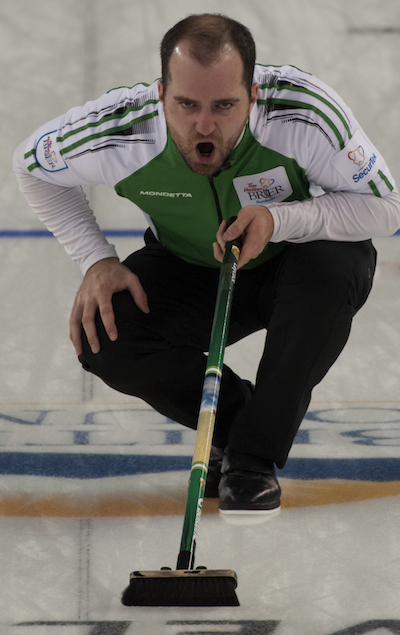 In other evening games, Steve Laycock and Saskatchewan beat Eddie MacKenzie of P.E.I. 8-5 and Jean-Michel Ménard of Quebec beat James Murphy of Nova Scotia 8-3 to keep their playoff chances alive. James Grattan of New Brunswick beat Jamie Koe of Northwest Territories/Yukon 8-3. The results leave B.C. and Alberta, the highest-scoring team here, tied at 8-1 and assured of playoff berths, and Manitoba at 7-2 and guaranteed of a tiebreaker spot. Then it gets interesting with teams basically fighting for, quite likely, the fourth and final playoff berth. Saskatchewan sits at 5-3, with Ontario and Quebec both 4-4. The rest of the field sees Newfoundland-Labrador and New Brunswick at 4-5, the Territories/Yukon 3-5, P.E.I. 3-6, Northern Ontario 2-7 and Nova Scotia 0-9. “What a draw he made for three,” Balsdon said of Koe’s draw in the sixth end. “I threw two zeros, gave him a chance at three, but what a draw, to come around his (own shot) on the button to get a piece of the button.” Koe admitted it was a tough shot and one that he, third Pat Simmons, second Carter Rycroft, lead Nolan Thiessen, alternate Jamie King and coach John Dunn “weren’t even sure it was there when we first looked at it. “But the ice is curling so beautifully so we just kind of put it out there and let it curl in hard and, just made it. It was a bit of a guess but … we had a decent idea (of ice) It was a good all-around team effort. The guys swept it good, and Pat called the line.” The put Alberta up 7-3 but Ontario countered with two in the seventh and gave up one in the eighth before Balsdon’s miss in nine that sealed their fate. “My guys played great, but I have to pick up my socks and play better,” admitted Balsdon, who is backed by third Mark Bice, second Tyler Morgan, lead Jamie Farnell, alternate Steve Bice and coach Jim Wilson. “We have four losses. A tough day tomorrow with Saskatchewan and Manitoba but if we can win our last three games, 7-4 should be okay for a tiebreaker anyway, so that’s the plan.” Ménard and his Quebec team stayed alive with another nail biter, although this one did finish in eight ends. “The last three games have been really tough mentally,” Ménard said, mentioning extra-end games against Manitoba and Newfoundland-Labrador and others that went to the wire. 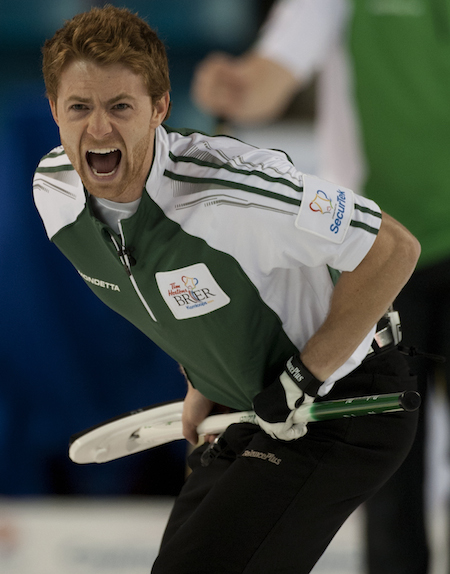 “We had opportunities to win the games and we didn’t. So after a while you start questioning yourself.” It’s been nerve wracking but the skip isn’t losing sleep over the games. “I’m very tired when I get back to the hotel, have a nice rye and Seven and then I fall asleep like a baby.” There are three draws Thursday, beginning at 8:30 a.m., 1:30 and 6:30 p.m. (all times PT). The final round-robin draw goes Friday at 8:30 a.m. If there are tiebreakers they will follow the Friday morning draw. The one-two playoff game goes Friday at 6:30 p.m. All draws for the Tim Hortons Brier will be televised live on TSN/RDS 2, the official broadcasting partner of the Season of Champions. Live scoring is available at: www.curling.ca/scoreboard/?e=19 To purchase tickets to the Tim Hortons Brier, presented by SecurTek, go to: www.curling.ca/2014brier-en/tickets/ The French version of this story will be available at www.curling.ca/2014brier-fr/ as soon as possible.