KAMLOOPS — It took a ton of great shots and a lot of near misses, and in the end Jeff Stoughton made the shot he had to in the 11th end to give his Manitoba rink a heart-stopping 7-6 win over John Morris of B.C. in the 14th draw at the Tim Hortons Brier presented by SecurTek. 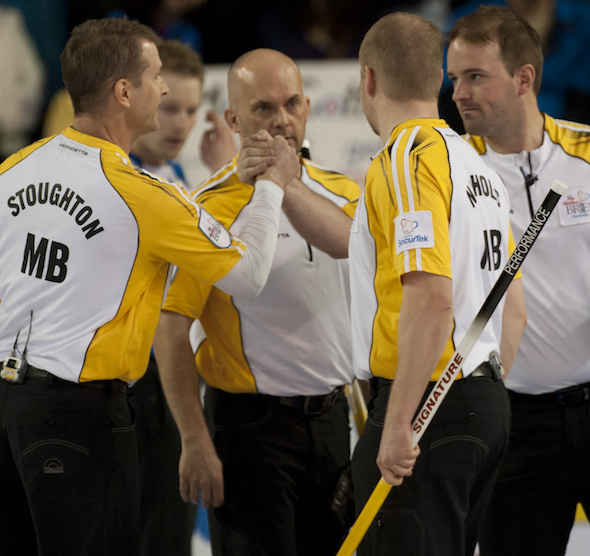 The result lifted Manitoba into a tie with B.C., both at 8-2 and put Stoughton into position to claim a berth in the 1-2 game if he beats Ontario in the evening draw. “It was a great battle,” Stoughton said. “Both sides played well, both sides got a couple of breaks. We were lucky we had the brick playing the extra end. Puts us in a great position where if we win tonight we’re in the 1-2 game.” 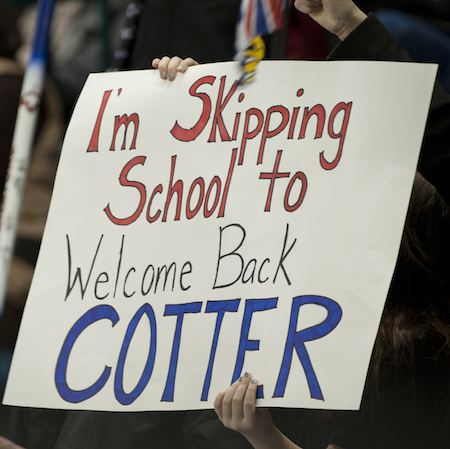 In the only other morning game, Brad Gushue of Newfoundland-Labrador won a seesaw battle with Northern Ontario 7-6 to remain at five losses and keep alive his slim hopes to get into a tiebreaker. Alberta is 8-1 and assured of a berth in the Page playoff one-two game if it beats P.E.I. in the afternoon draw. Saskatchewan  is 5-3, Ontario and Quebec 4-4, Newfoundland-Labrador 5-5, New Brunswick 4-5, Northwest Territories/Yukon 3-5, P.E.I. 3-6, Northern Ontario 2-8 and Nova Scotia 0-9. Manitoba and B.C. traded deuces in the first two ends – B.C. third Jim Cotter, who throws last rocks, making a tapback in the first and Stoughton doing the same in the second. Then they took turns forcing each other to take singles through five ends until the big break came for Manitoba in the eighth when Stoughton made a raise takeout to sit two. Cotter tried for a double at the back of the house but was thin and he got only one, leaving Stoughton a routine draw for the deuce. 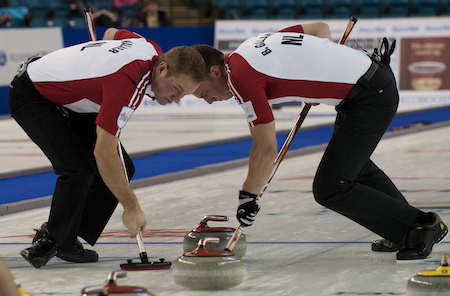 “The big shot was the angle raise to stick and get two and finally get control of the game,” said Stoughton, a three-time Brier champion who is backed by third Jon Mead, second Mark Nichols, lead Reid Carruthers, alternate Garth Smith and coach Rob Meakin. “That’s a real tough double, one of those where you probably make one every three or four shots,” said Morris. “We missed it by a hair. One of those games where we were close but not sharp enough. Jimmy made a couple of clutch shots just to keep us in it.” 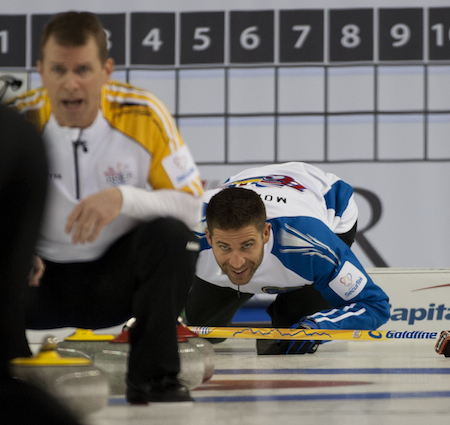 B.C. skip John Morris gets low to watch the line of a Manitoba shot.

In the end Stoughton had a relatively straight-forward hit and stick for the winning single in eleven. “As long as I didn’t hit it thick we were going to be okay,” he said of the shot. “About a third of a rock and I think we hit it bang on a third, exactly where we needed to hit it. “This gives us confidence going into the playoffs. We feel we’re playing better now that at the start of the week and that’s what you want to build on.” All draws for the Tim Hortons Brier will be televised live on TSN/RDS 2, the official broadcasting partner of the Season of Champions. Live scoring is available at: www.curling.ca/scoreboard/?e=19 To purchase tickets to the Tim Hortons Brier, presented by SecurTek, go to: www.curling.ca/2014brier-en/tickets/ The French version of this story will be available at www.curling.ca/2014brier-fr/ as soon as possible.