One moment Jean-Michel Ménard was getting ready for an extra end and the next he was in the Page playoff 3-4 game at the Tim Hortons Brier, presented by SecurTek. 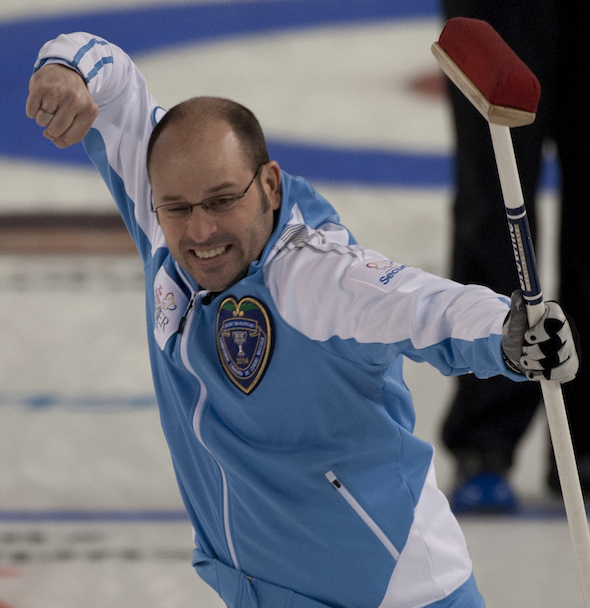 The Quebec skip had his team up 7-5 against Kevin Koe of Alberta in the 10th end Friday morning but figured he was heading for a tiebreaker game against Steve Laycock of Saskatchewan, who was leading New Brunswick 7-6 with the hammer coming home. But Laycock’s last-rock draw slid through the house, allowing James Grattan to steal three for a 9-7 win that left Quebec just needing a win to avoid the tiebreaker. “Coming home up two we were getting mentally ready to give up two and have to win the game in overtime,” said Ménard. “Against a team like Kevin Koe, he knows how to generate offence. But when he went to throw his first rock we saw right beside us, Steve Laycock went right through and (third) Martin (Crête) and I just looked at each other, didn’t say a word. I thought I think I’ve got a good sniff at it.” Moments later he made a double takeout of two Alberta stones to secure his 8-5 win and a playoff berth. 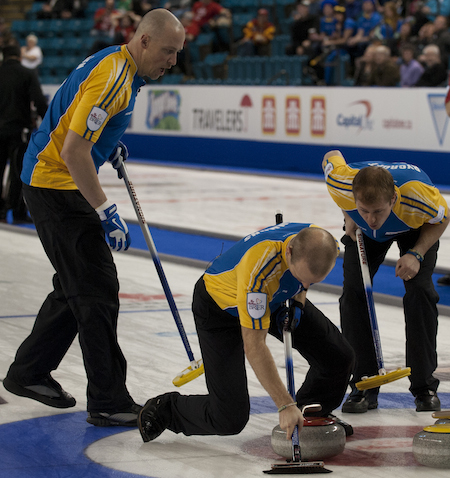 “Going from 3-4 to 7-4 without a tiebreaker, that’s pretty amazing. I think as a team that was probably one of the best, if not the best game of the week. It was a clutch performance.” The Alberta loss means they will play first-place British Columbia in the 1-2 game at 6:30 p.m. PT with the winner advancing to Sunday’s 4:30 p.m. final. Quebec will play Manitoba in the 3-4 game at 1:30 p.m. Saturday with the winner playing the loser of the 1-2 game in the semifinal at 6:30 p.m. Saturday. In the other morning games Eddie MacKenzie of P.E.I. beat Jamie Koe of Northwest Territories/Yukon 11-7 and Greg Balsdon of Ontario beat James Murphy of Nova Scotia 9-6. The results left Alberta, B.C. and Manitoba tied with 9-2 records. The draw-to-the-button results gave B.C. first place and Alberta second. The rest of the final standings saw Quebec at 7-4, Saskatchewan, New Brunswick and Newfoundland-Labrador at 6-5, Ontario 5-6, P.E.I. 4-7, Territories/Yukon 3-8, Northern Ontario 2-9 and Nova Scotia 0-11. Ménard, Crête, second Éric Sylvain, lead Philippe Ménard, alternate Pierre Charette and coach Bob Ménard, swung the game in their favour in the middle ends by scoring three in the fifth and two more in the seventh for a 6-4 margin. “If there’s still some magic in our bag we’ll try to use it,” against Jeff Stoughton of Manitoba, said Menard. “Finishing with four straight wins we feel pretty good. The three teams who finished 9-2, we were fortunate to beat all of them.” Koe and his crew of third Pat Simmons, second Carter Rycroft, lead Nolan Thiessen, alternate Jamie King and coach John Dunn weren’t as sharp as they had been all week, but Koe said he wasn’t concerned going into the playoff game. 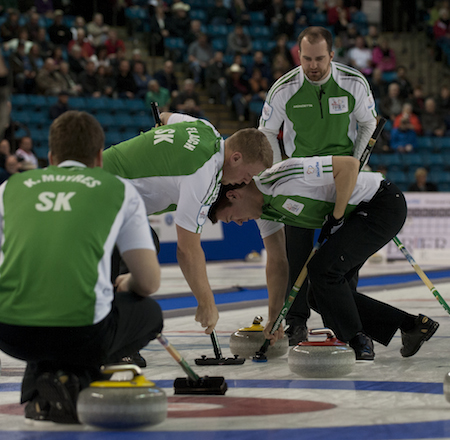 Team Saskatchewan just fell short of the playoffs after a loss to New Brunswick on Friday.

“Fortunately for us it was not the biggest game of the week,” he said. “The end we gave up three was bad luck. I threw mine good, it came within a millimetre, but it doesn’t work out. That was just a bad break. Other than that we’re throwing good so I’m not worried.” While Ménard was quietly celebrating, Grattan and his rink were overjoyed one moment, devastated that next. “It happened so quick,” said Grattan, who figured they were into a tiebreaker scenario after being Saskatchewan. “We thought we were in, and three minutes later we’re no better off than we were this morning. I’m pretty proud of the guys, a 1-5 start and here we are on Friday, for a split second we thought we were going to be in some sort of tiebreaker.” All draws for the Tim Hortons Brier will be televised live on TSN/RDS 2, the official broadcasting partner of the Season of Champions. Live scoring is available at: www.curling.ca/scoreboard/?e=19 To purchase tickets to the Tim Hortons Brier, presented by SecurTek, go to: www.curling.ca/2014brier-en/tickets/ The French version of this story will be available at www.curling.ca/2014brier-fr/ as soon as possible.