KAMLOOPS — Kevin Koe and his Alberta team scored triples in the second, fifth and seventh ends Sunday to roll to a 10-5 win over John Morris of B.C. to win the Tim Hortons Brier, presented by SecurTek. 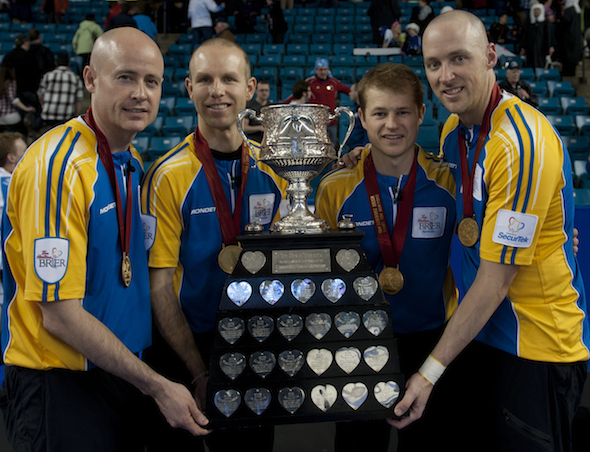 Koe, third Pat Simmons, second Carter Rycroft, who was named playoff MVP, lead Nolan Thiessen, alternate Jamie King and coach John Dunn, regained the championship they had previously won in 2010, the year they also won the world title. It’s their second championship in three visits to the Brier, although the first for Simmons. 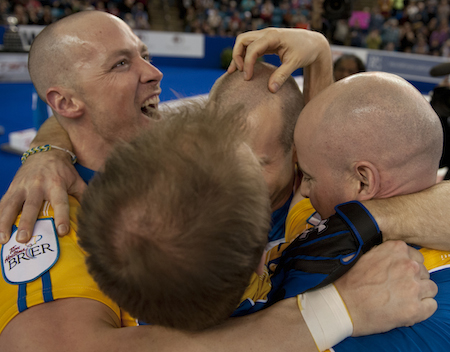 B.C., with third Jim Cotter who throws last stones, second Tyrel Griffith, lead Rick Sawatsky, alternate Jody Epp and coach Pat Ryan backing up Morris, got off to a good start with two in the first end when Alberta couldn’t execute a double and left Cotter an easy draw. But Alberta came right back in the second with three after Rycroft made a perfect triple kill, Morris slid his first rock through the house and eventually Koe had a routine hit and stick for the three. “The first three was the big one,” said Koe. “We gave up a terrible deuce in one. We just wanted to actually blank that end and not get down. So to bounce right back with three in the next end (was great). We only missed one shot, Carter made a great triple, we had a couple of draws and that really gave us the confidence.” “Just to answer the bell was a big thing,” said Rycroft, who curled a solid 96 per cent. “It made a statement that hey, we’re here to play today. They dominated us in the 1-2 game and we felt we kind of owed them.” The Koe second has said he is taking next year off with his wife expecting another child this summer. 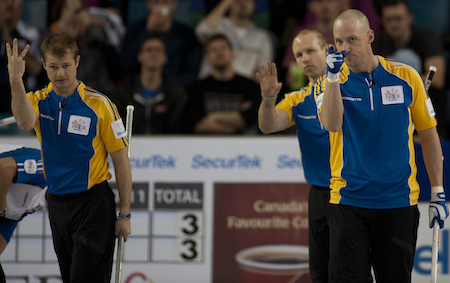 “It’s a fantastic honour,” he said of the MVP. “This might be my last year so I wanted to make sure I went out with a blast. I’m not the kind of guy to say I’m retiring and not coming back. I know I’m going to miss it but I’m taking the year off.” After blanking the third, B.C. was forced to take one in the fourth and in the fifth Cotter’s try to hit and roll behind cover slid wide to the wrong side of an Alberta rock. That left Koe a delicate tap back for three and his sweepers made sure it was successful for a 6-3 lead. “We got caught with the ice conditions,” said Cotter. “It’s not much fun right now but one day we’ll look back and be proud of this. Whether it’s in front of your home fans or wherever it’s no fun, you want to win, but that’s curling, that’s the way it goes. Against a great team like Koe, they were bang on, making everything; it’s tough to come back.” Alberta got three more in the seventh when Cotter tried to tuck his final rock between two Koe stones in the four-foot but was inches wide, leaving Koe a straight ahead double takeout for his triple and a 9-4 margin. “We got fooled with the ice, curled more than we had seen all week,” said a disappointed Morris. “It’s painful losing this final. Heartbreaking to lose this in the hometown of Kamloops for Jimmy. I can’t pinpoint where it went wrong. I’m usually pretty confident in putting the broom down, have been all week but today I was second-guessing a bit.”

Earlier in the day three-time Brier champion Jeff Stoughton of Manitoba stole five points in the first four ends and went on to beat Jean-Michel Menard of Quebec 9-5 in the bronze-medal game. It is Alberta’s 26th Brier title, just one behind the all-time leader, Manitoba. The Koe team will have their names added to the Brier Tankard, earn $40,000 and 45 Canadian Team Ranking System points and become Team Canada. They earn automatic berths at the 2014 world championship March 29-April 6 in Beijing, China, the 2014 Canada Cup, Dec. 3-7 in Camrose, Alberta, the 2015 World Financial Group Continental Cup, Jan. 8-11 in Calgary and the 2015 Tim Hortons Brier Feb. 28-March 8 in Calgary. As runners-up, the B.C. team receives $40,000 and 35 CTRS points. The Stoughton team gets $30,000 and 30 points and Quebec $20,000 and 20 points. The teams that failed to make the playoffs each earn $7,000 and two CTRS points for each round-robin win. For the first time in history, the winner of the Tim Hortons Brier will become Team Canada and will return in 2015 to defend its title. They will be joined in the 12-team main round robin by the top 10 provinces/territories based on total number of Brier round-robin wins in 2012, 2013 and 2014. The three teams with the fewest overall wins in the 2012, 2013 and 2014 Briers – Nova Scotia, Prince Edward Island and the Yukon — will play in a qualifying tournament just prior to the 2015 event. They will play off with Nunavut, which is eligible to compete in the Brier for the first time in 2015, for the 12th and final berth in the field.