KAMLOOPS — Kevin Koe made a stone-cold draw to the button with last rock in the 11th end Saturday to score a single and beat Quebec 9-8 in the semifinal at the Tim Hortons Brier,presented by SecurTek. 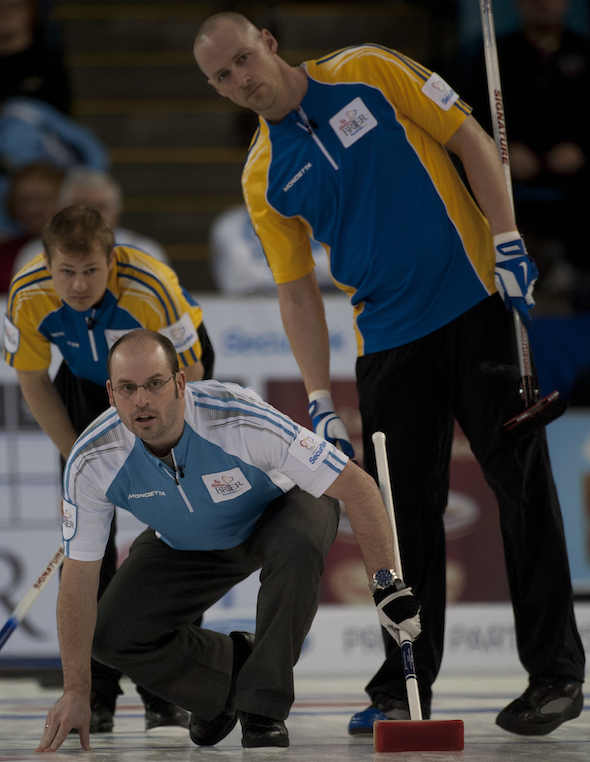 Alberta will play John Morris of B.C. in the final Sunday at 4:30 p.m. PT while Jean-Michel Ménard and his Quebec team will play Jeff Stoughton of Manitoba for the bronze medal at 9 a.m. PT. It is often said that practice makes perfect but that certainly wasn’t the case for Koe. “When we practised this morning I couldn’t hit the four-foot to save my life so I was a little concerned,” he said after the nail-biting victory. “But I got out there tonight and it felt great. I made it perfect in nine to steal one so I just wanted to have that path for my shot in the extra. I should make that every time.” 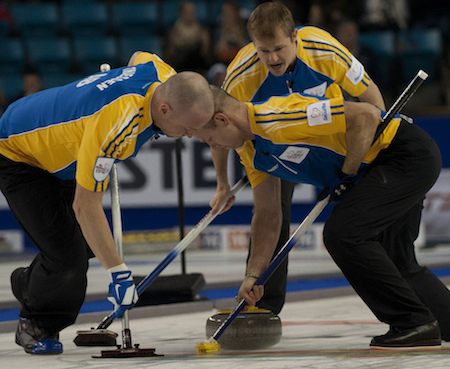 “It looked like an easy draw but it was frosty,” Ménard said of the shot. “It was pretty easy for a thrower to put a little more weight and he could slide across the house, but he put it right on the button.” Alberta appeared in control of the game, leading 6-3 after five ends and 6-4 after six. But after giving up just two steals through the 11-game round-robin, the Albertans let Quebec steal two in the seventh to tied the game 6-6. After Alberta missed on consecutive tries for double takeouts, Koe just rubbed a Quebec shot rock in the four-foot and slid past to let Ménard steal the two. “I didn’t think I threw it that bad … obviously that was a big shot to let them back in it,” said Koe. “We had worked quite great to get control.” In trying to get their own deuce in the eighth, Koe tried an angle tapback with his final stone but his rock slid too far and he had to take a single. In nine, Koe made a perfect draw to the button that forced Ménard to try a long in-off. He was narrow and let Alberta steal a critical single for a two-point lead coming home. The Ménard team, however, has been living on the edge for days and has refused to go away. And they weren’t going easy Saturday. When Alberta put their first two rocks of the 10th in the house, Quebec eventually used them to set up a last-rock tight double takeout that Ménard made for two to force the extra end. “We’ve very satisfied the way we played the last six, seven games,” said Ménard. “Disappointed because the way we were playing I thought we had a sniff to win. But the magic ran out today. 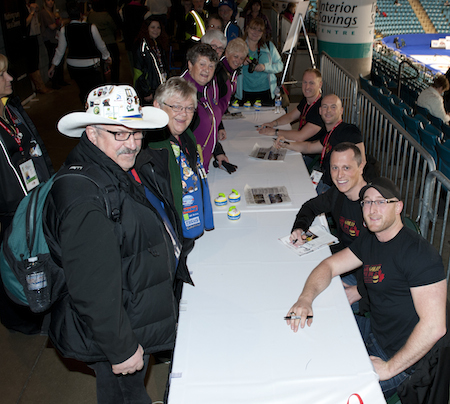 “We missed a couple of shots by about a quarter inch. First end that double, half inch more I make the double. A couple of other shots here and there. But we hung in tight.” Koe and his crew of third Pat Simmons, second Carter Rycroft, lead Nolan Thiessen, alternate Jamie King and coach John Dunn had reached the Page 1-2 playoff game for the first time this year only to lose that game to B.C. Ménard, third Martin Crête, second Éric Sylvain, lead Philippe Ménard, alternate Pierre Charette and coach Bob Ménard had knocked off Stoughton 7-6 in the Page 3-4 playoff game earlier in the day to get to the semifinal. Alberta was in the semifinal after losing to B.C. in the Page 1-2 playoff game Friday evening. All draws for the Tim Hortons Brier will be televised live on TSN/RDS 2, the official broadcasting partner of the Season of Champions. Live scoring is available at: www.curling.ca/scoreboard/?e=19