KAMLOOPS — Jeff Stoughton stole five points in the first four ends to build a 7-0 lead and cruise to a 9-5 win over Jean-Michel Ménard of Quebec in the bronze-medal game Sunday morning at the Tim Hortons Brier, presented by SecurTek. 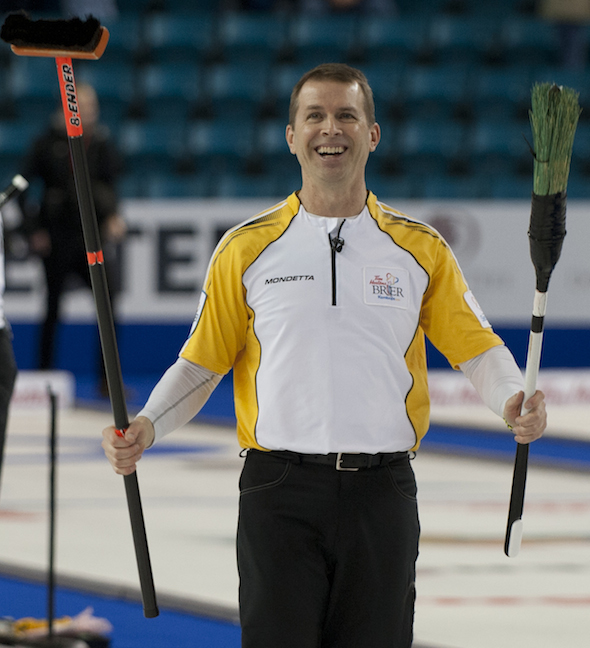 Manitoba skip Jeff Stoughton leaves the ice with a smile after winning the bronze medal at the 2014 Tim Hortons Brier, presented by SecurTek. (Photo, CCA/Michael Burns)

In the 4:30 p.m. PT gold-medal game John Morris of B.C. plays Kevin Koe of Alberta. Quebec was set up to possibly steal in the first end until Ménard’s attempted hit-and-roll with his final stone was narrow and drove a guard onto his own shot rock. That left Stoughton an easy draw for two. The wheels fell off for Quebec after that. Costly and uncharacteristic misses by all members of the Quebec team opened the door wide for Manitoba to steal two in the second, one in the third and two more in the fourth. 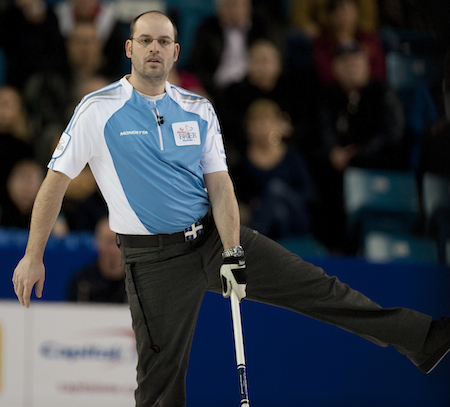 “We ran out of gas,” admitted Ménard. “Quite frankly I think we left the rest of our blood yesterday when we played Alberta (in the semifinal). This morning I was totally, mentally exhausted. Playing back-to-back games yesterday and having five hours sleep because of the time change. “We weren’t quite focused; especially me and it cost us early. I missed a couple of easy shots, just snowballed after.” While the Quebec rink of Ménard, third Martin Crête, second Éric Sylvain, lead Philippe Ménard, alternate Pierre Charette and coach Bob Ménard struggled mightily, Stoughton and his team of third Jon Mead, second Mark Nichols, lead Reid Carruthers, alternate Garth Smith and coach Rob Meakin weren’t missing much. Stoughton’s front end set the table in every end to prevent Quebec from generating any offence. Ménard missed on a difficult raise take-out in the second, was heavy on a draw to the four foot in the third and was wide on a tap-back in the fourth. “They came out a little flat and it’s probably to be expected after the disappointment of their game last night,” Stoughton said of Quebec. “That happens when two teams are out there who really don’t care about the game . . . and we were lucky to be on the other side of the draw. “We got lucky in the first end. If he makes his shot they probably steal two and they’re going to win the game.” Quebec finally got on the board in the fifth when Ménard had an empty house to draw into for a single. The Quebec skip benched himself in the sixth, sending in Charette to skip and throw third rocks. 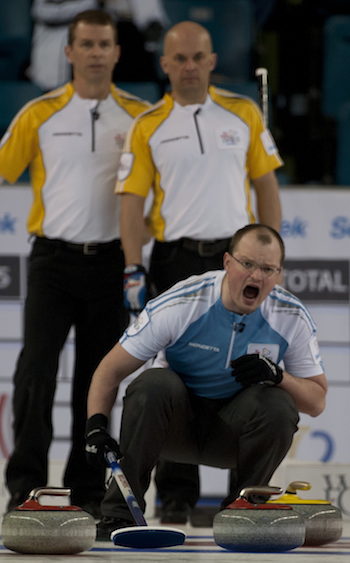 “I decided to bench myself,” said Ménard. “They seemed to have some fun, steal a few points to extend the game a couple of ends so that was good.” At the same time Manitoba brought in Smith to play for Carruthers. Quebec scored two in the seventh and stole two in the eighth when Stoughton was wide on a hit-and-stick and rolled out, giving Quebec two to prolong the game one more end. Manitoba receives $30,000 and 30 Canadian Team Ranking System points for finishing third while Quebec gets $20,000 and 20 points. Teams missing the playoffs received $7,000. Quebec had won its final four games of the round-robin to finish fourth at 7-4 to get into the Page 3-4 playoff game where they beat Manitoba 7-6 by stealing a single in the 10th end. Manitoba had finished 9-2, tied with Alberta and B.C. but got third place on the draw to the button totals. All draws for the Tim Hortons Brier will be televised live on TSN/RDS 2, the official broadcasting partner of the Season of Champions. Live scoring is available at: www.curling.ca/scoreboard/?e=19 To purchase tickets to the Tim Hortons Brier, presented by SecurTek, go to: www.curling.ca/2014brier-en/tickets/ The French version of this story will be available at www.curling.ca/2014brier-fr/ as soon as possible.