Wheelchair curling team off to a great start at Paralympic Games

Canada’s wheelchair curling team kick starts their run for a third consecutive gold medal with back to back wins at the 2014 Winter Paralympic Games in Sochi, Russia. 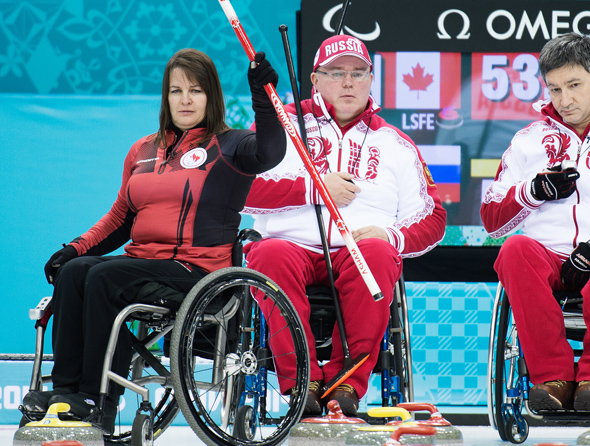 In the morning contest against Great Britain, it took the team a couple of ends to shake off the rust and get back in to their customary scoring mode while their skillful opponents built up a two-point lead. At the end of the third, it looked like the Canadians would take charge after scoring a solid two points but Great Britain answered right back with a single in the fourth to lead the defending gold medal champions once again by a single point.  An 11-rock traffic jam provided the fifth end with a very interesting scoring opportunity but skip Jim Armstrong’s attempt to score two came up short but tied the score.  One more for Team Canada in the sixth and then the game’s most important shot came in the seventh.  Armstrong was facing two British counters on his final stone, but the Canadian skip executed a hit and roll behind cover to set up a steal of one point and take control of the game.  One more in the eighth and the Team Canada rink got its first win of these Paralympic Winter Games with a final score of Canada 6 and Great Britain 3. Their next contestants were a much improved Russian team who attracted hundreds of fans who cheered loudly for just about every rock that entered the house.  Much to the crowd’s delight, an attempted draw came up short for Armstrong in the first end and the home town team was on the board with one. Canada’s wheelchair curling team has three veteran players from the 2010 Vancouver Paralympic Winter Games and they are Jim Armstrong (Cambridge, ON), Ina Forrest (Armstrong, BC) and Sonja Gaudet (Vernon, BC) who also had the honour of leading Team Canada into the opening ceremony as flag bearer.  The team’s newest members, Dennis Thiessen (Sanford, MB) and Mark Ideson (London, ON) both saw action in today’s contests. The next two ends saw the teams exchange single points. In the fourth end, Team Canada was finally able to score two points on the strength of both stones delivered by third, Ina Forrest.  Going into the eight end tied four apiece, Forrest once again prevailed when she drew around two front stones to the four foot, forcing the Russian team to try a difficult tap back to get shot stone. The Russian team failed on that and Canada eventually won the game. The team landed in Russia on March 3 and have been patiently waiting for the games to begin. “It’s real good to get on the ice after waiting that long and starting the games,” said Forrest. “What stands out the most for me today is the crowd because they were so into the game,” said Mark Ideson, the youngest member of the team and perhaps the one with the least experience since he only took up the sport three short years ago.    “They cheered every time Russia made a shot, they cheered every time we missed a shot but it was a very fun atmosphere and a real pleasure to be part of this day and win in my first Paralympic games experience.” The team can sleep in a bit  after a busy but very successful start to this ten-team, round robin tournament.  Sunday they face Sweden, who always comes prepared to win, but the Canadians will likely have a different outcome planned for the Swedes. For full information about Team Canada at the Sochi 2014 Paralympic Games, please visit paralympic.ca/team-canada.