Canada comes from behind to defeat China at Paralympics

Today’s contest against an up-and-coming China team did not disappoint the fans but probably gave Team Canada coach Joe Rea a few grey hairs as Canada came from behind to defeat China 8-5 in Sochi today.China slowly and surely built up a four-point lead scoring a single in each of the first four ends. Canada showed great patience as they started the fifth end and demonstrated a renewed determination to turn the game around.  By the middle of the fifth end China was counting four, but two great shots by third Ina Forrest started the comeback.  China came right back with one to the button, but skip  Jim Armstrong wasn’t going to allow them to score on this end and delivered two brilliant shots to finish up with three points.  China was still leading by one but the momentum was shifting in favour of Canada. China showed its composure by taking one more in the sixth end with a skillful takeout of a Canadian counter. In the seventh end, Armstrong made a great hit and roll and his stone ended up in the four foot. The Chinese skip missed his takeout and Canada scored four points.  Canada now led for the first time in the match but only by two points.  Given the up and down nature of this game, no one on the Canadian team was ready to take this for granted, and besides that, the Chinese looked ready to take another stab at changing the score to their advantage. 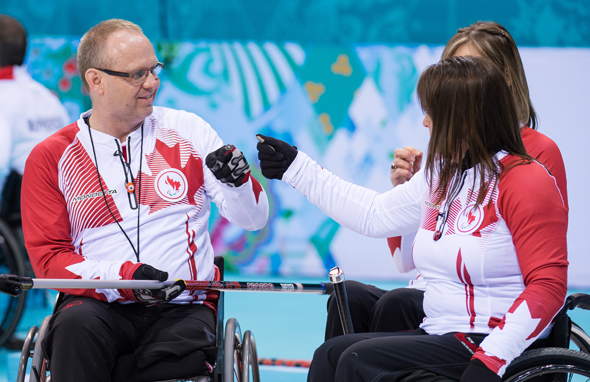 Canadian skip, Jim Armstrong, thinks the Chinese team has good potential. ”In fact, we were just talking the other day when the ice started to get heavy that this is made for these young kids from China,” he said. “They come out low, they throw hard and I think they’ll be close this week. If the conditions stay like this they could very well be the team to beat.” Going into the final end and leading 7-5, Canada and China put up a wall of no less than ten rocks in front of the house that contained one lone Chinese stone at the back of the eight foot.  China made one last attempt to tie the game but their shot went off course and nudged a Canadian stone close to the button to make the final score 8-5. “It was kind of a reverse of last night when we lost to Norway 8-6 in an extra end,” said  Armstrong.  “Last night we had a game in hand and gave it away, essentially. Today we had a loss in hand and stumbled to a win. I struggled early and the team hung in there with me and were very patient and eventually I made a couple of shots when they mattered and we snuck a win out of it.” Tomorrow Canada takes on Korea (2-4) at 9:30 a.m. at the Ice Cube. PHOTOGRAPHY: Media are invited to visit photos.paralympic.ca and create an account to be able to download high-resolution photos of Canadian Paralympic athletes at any time, at no cost. For full information about Team Canada at the Sochi 2014 Paralympic Games, please visit paralympic.ca/team-canada.