On the last day of round robin play at the 2014 Paralympic Games, matches in wheelchair curling Canada’s day in the Ice Cube can only be described as interesting. After downing Slovakia decisively with a score of 16-0 Canada went on to be defeated by last place Finland (1-6) by a score of 12-1. Canada set two Paralympic Winter Games records for most points scored and the highest margin of victory in their 16-0 rout of Slovakia.  But according to skip Jim Armstrong the lop-sided victory was not intentional. “We don’t like to run the score up, but we had the opportunity to use it to find our own game and that was the important part,” he said. 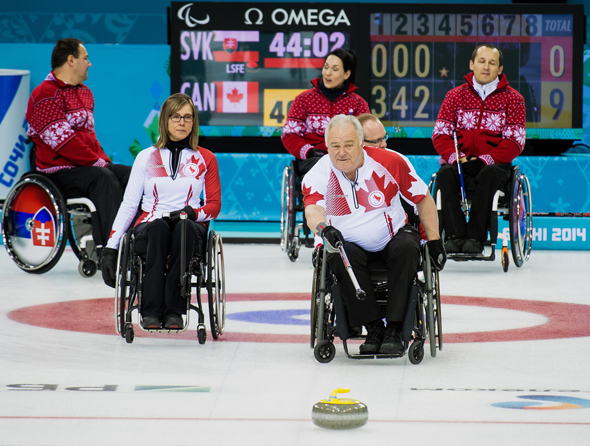 Now that the two days of rain have stopped and the temperature has dropped, the ice makers at the Ice Cube are able to provide a more consistent surface for the curlers. Armstrong noticed the difference in the ice and used this to the team’s advantage. “We’ve been struggling all week and all of a sudden we’ve got an opportunity where the conditions are much more favourable and our confidence is anywhere but up. So just to get an opportunity to throw and remind ourselves what we’re capable of,” he said. In the afternoon match, things went off the rails very quickly for the Canadians.  The first frame of the contest saw Finland put two on the board. But the next end, the Finnish skip made a nice clearing shot to force the Canadian team to draw in the eight foot. Armstrong’s shot missed and Canada gave up a steal of five points.  Finland led 7-0 after two, and as the saying goes, “the rest was history.” Armstrong, who is the consummate gentleman of the game, summed up this defeat. “My mother told me there would be days like this,” he said. “It happens. We were just on the wrong side of it the whole day. Fortunately, it was a game that didn’t have a lot of impact. It’s not the first game and it won’t be the last.” 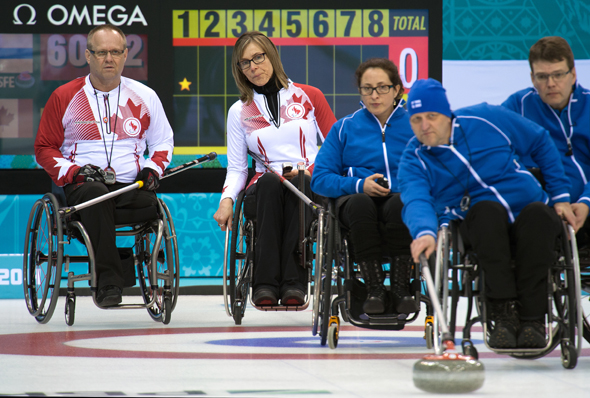 Canada finishes the week in second place behind Russia and will face China in the semifinals on Saturday at 9:30.  Russia takes on fourth place Great Britain. The gold medal game will be played at 15:30 (local time). The crowds at the Ice Cube have been great all week.  There has been great energy in the building and fans are having a lot of fun especially when the hometown Russian team is on the ice.  That’s when things really get lively.  It’s great for the Paralympics and great for wheelchair curling to see so many people enjoying the quality of the play.  This bodes well for future games and for the growth of the sport globally and especially in Russia.  Crowds will be even louder when the first place Russians  roll on the ice Saturday morning. PHOTOGRAPHY: Media are invited to visit photos.paralympic.ca and create an account to be able to download high-resolution photos of Canadian Paralympic athletes at any time, at no cost. For full information about Team Canada at the Sochi 2014 Paralympic Games, please visit paralympic.ca/team-canada.