Team U.S.A. is getting the job done in the early portions of the 2014 Ford World Women’s Curling Championship, presented by Booster Juice. 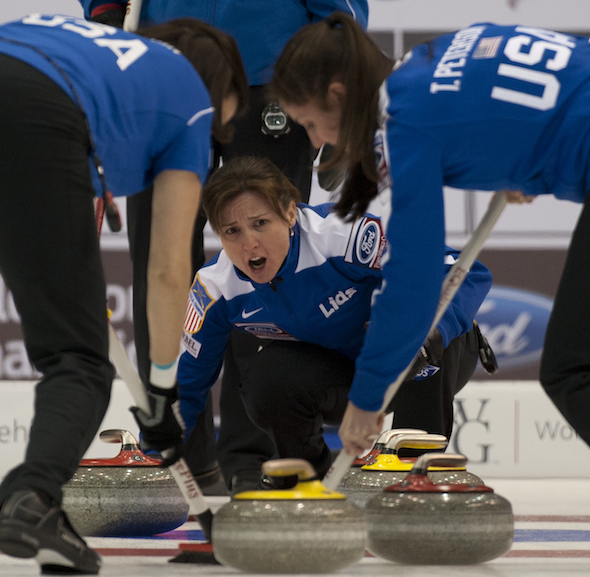 Pottinger’s U.S. team — third Nicole Joraanstad, second Natalie Nicholson, lead Tabitha Peterson, alternate Tara Peterson and coach Derek Brown — improved to 2-0 on Sunday afternoon at Harbour Station in Saint John, N.B., with a 6-5 win over Germany’s Imogen Lehmann. The victory put the U.S. into a three-way tie for top spot in the 12-team round-robin standings with Canada’s Rachel Homan, who had the afternoon bye, and Switzerland’s Binia Feltscher. It’s a far better start than Pottinger’s team got off to in its last trip to Canada for a Ford Word Championship, two years ago in Lethbridge, Alta., where the team lost its first four games before rallying for seven straight wins to make a playoff tiebreaker. 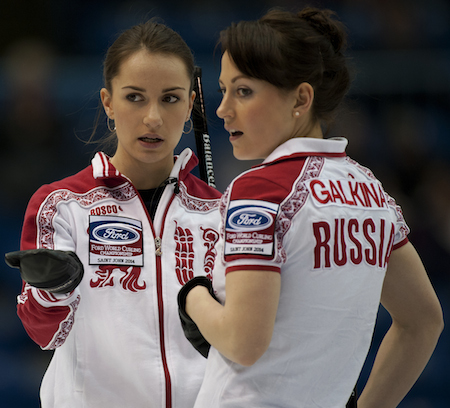 “I don’t know that (Lethbridge) was nagging at me, but it was definitely there in the back of my mind,” said Pottinger. “We understood the importance of starting off and putting a good foot forward right away. I would say that was more the focus. Everyone understands what we have to do and how long this round robin is, and how important every single game is.” Perhaps the biggest difference between 2014 and 2012 early on is that Team U.S.A. is taking advantage of its opportunities to put points on the scoreboard. “If we’re getting a miss, we’re doing a good job of making the shot right after that one and building on it,” said Pottinger. “But we’re not going to get carried away and get ahead of ourselves because we don’t want to stumble. We want to take it one game at a time. We understand — one at a time.” The Swiss, meanwhile, picked up their second straight win, doubling China’s Jinli Liu 6-3. China (0-2) led 3-1 after seven ends, but Switzerland rallied down the stretch with two in the eighth end, a steal of two more in the ninth and another in the 10th. “Yes, that was really important,” said Feltscher of the eighth-end deuce. “When we don’t make it, it was not good. And (the steal in the ninth end) was lucky for us.” Sweden’s Margaretha Sigfridsson had a chance to take over top spot all on her own, but dropped a 7-4 decision to Russia’s Anna Sidorova. Russia controlled the game after stealing two in the second end, holding the Swedes to nothing but singles and adding deuces in the sixth and eighth ends. The result left both teams with 2-1 records. 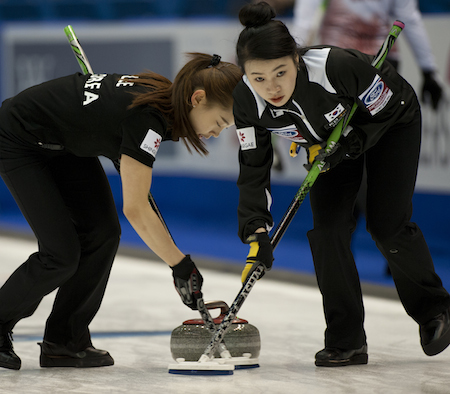 “That was pretty amazing to win against such a big name,” said Sidorova. “Sigfridsson is the silver-medallist at the Olympic Games, so for us, it was a really important game and also an important win. Of course, with such teams you have to fight for the win, and that’s what we did today.” In the other afternoon game, South Korea’s Ji-sun Kim improved to 2-1 with a 7-4 win over Latvia’s Evita Regža. The Latvians dropped to 1-2. Canada, Denmark’s Madeleine Dupont (1-1), Anna Kubešková of the Czech Republic (0-2) and Germany’s Imogen Lehmann (0-2) had the byes. The 2014 Ford Worlds continue on Sunday with a draw at 7:30 p.m. (all times Atlantic). All draws for the 2014 Ford World Women’s Curling Championship will be televised on TSN/RDS2, the official broadcasting partner of the Season of Champions. Live scoring is available at: www.curling.ca/scoreboard/?e=58 To purchase tickets to the Ford World Women’s Curling Championship, presented by Booster Juice, go to: www.curling.ca/2014worldwomen-en/tickets/ The French version of this story will be available at www.curling.ca/2014worldwomen-fr/ as soon as possible. Follow @ccacurling on Twitter (#FWWCC) for updates during the 2014 Ford Worlds.