Switzerland’s Bina Feltscher has taken over sole possession of the top spot in the standings at the 2014 Ford World Women’s Curling Championship, presented by Booster Juice. 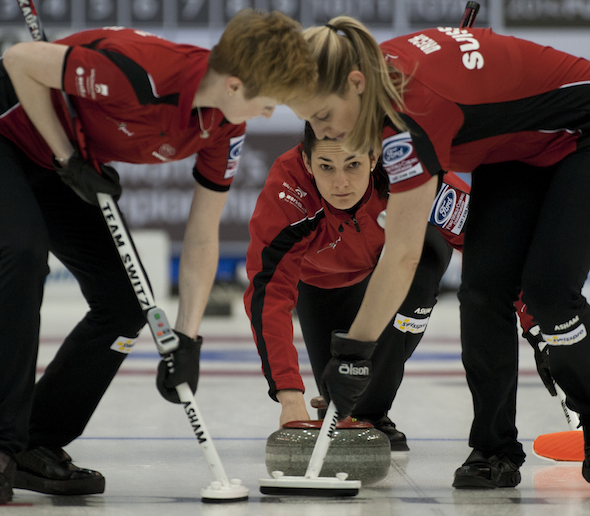 Feltscher’s Swiss squad is now the lone unbeaten entry in the 12-team round-robin competition following an 8-2 triumph over Latvia’s Evita Regža Monday morning at Harbour Station. With the victory, Feltscher, third Irene Schori, second Franziska Kaufmann and lead Christine Urech improved to 4-0, while Latvia dropped to 1-3. “The wins are helping; the confidence starts to roll,” said Swiss coach Al Moore. “They beat a great team (Canada) last night, and they won a bonspiel in Canada (Red Deer, Alta.) this year, which really helped their confidence coming into here. They’re a lot of fun on the ice, they enjoy each other’s company, and they play with that kind of passion.” The Swiss opened the game with back-to-back deuces in the first two ends, and then put it in cruise control until scoring three in the eighth end to prompt handshakes. 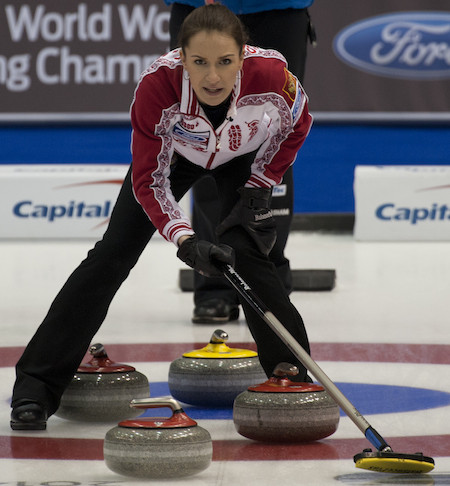 “We were looking for playoff contention,” said Moore. “My big job was just making them believe that they’re as good as they are and that they can compete.” Allison Pottinger of the U.S. had a chance to join the Swiss atop the standings, but instead suffered her first loss after three straight wins to open the Ford Worlds, bowing 8-5 to Sweden’s Margaretha Sigfridsson, a result that left both teams with 3-1 records. “It was a really important game,” said Sigfridsson. “The ice was good and we were comfortable with the rocks, so I was happy with the game. I think that she (Pottinger) has a good team; it was one of those games that you want to win because I think they could be a playoff team.” Russia’s Anna Sidorova, meanwhile, moved into a tie with the U.S. and Sweden at 3-1 thanks to a 7-3 triumph over Germany’s Imogen Lehmann, who remained winless at 0-4. The Russians opened the game with a deuce, and then put a three on the board in the seventh to take control.

“We are trying to keep our confidence on a high level, but of course, it’s difficult to keep it there all the time, so mistakes can happen,” said Sidorova, who won her third straight after losing to Canada’s Rachel Homan in the opening draw on Saturday. “That’s normal because it’s a game. But the goal over the next few games is to keep our performance as high as we can.” In the other Monday morning game, China’s Sijia Liu improved to 2-2 with an 8-6 win over South Korea’s Ji-sun Kim (2-2). Besides Canada (2-1), Denmark’s Madeleine Dupont (1-2), Scotland’s Kerry Barr (1-2) and Anna Kubešková of the Czech Republic (0-3) had byes on Monday morning. The 2014 Ford Worlds continue on Monday with draws at 2:30 p.m. and 7:30 p.m. (all times Atlantic). All Canadian games and the playoff rounds for the 2014 Ford World Women’s Curling Championship will be televised on TSN/RDS/RDS2, the official broadcasting partner of the Season of Champions. Live scoring is available at: www.curling.ca/scoreboard/?e=58 To purchase tickets to the Ford World Women’s Curling Championship, presented by Booster Juice, go to: www.curling.ca/2014worldwomen-en/tickets/ The French version of this story will be available at www.curling.ca/2014worldwomen-fr/ as soon as possible. Follow @ccacurling on Twitter (#FWWCC) for updates during the 2014 Ford Worlds.