A two-win day has Canada firmly in playoff contention at the 2014 Ford World Women’s Curling Championship, presented by Booster Juice. 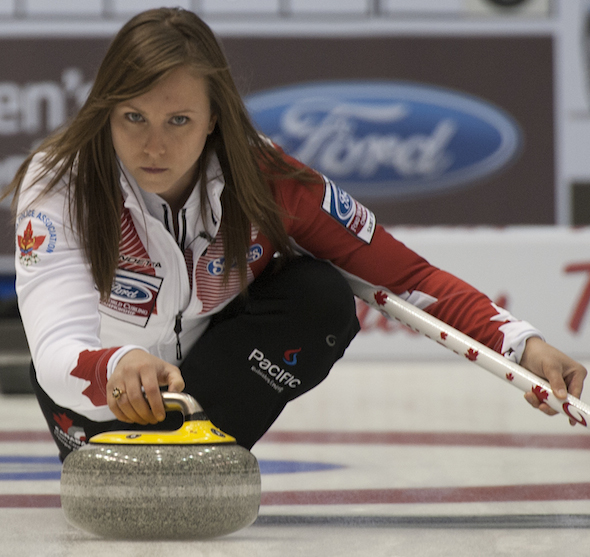 After romping to an 8-2 win over Denmark earlier on Monday at Harbour Station in Saint John, N.B., Rachel Homan’s Ottawa squad — third Emma Miskew, second Alison Kreviazuk, lead Lisa Weagle, alternate Stephanie LeDrew, team coach Earle Morris, national coach Elaine Dagg-Jackson — won the Battle of North America, turning back Allison Pottinger of the United States 9-3 in six ends. With the win, Team Canada improved to 4-1, behind only Binia Feltscher of Switzerland, who won 7-3 over Denmark (1-4). “We definitely bounced back from yesterday,” said Kreviazuk, referring to a Sunday night loss to the Swiss. “We had a tough game but we learned from our mistakes and tried to build on that today. We got a little quiet on the ice yesterday when we weren’t sure of the ice conditions and it came back to burn us in the end. We tried to make sure today that we kept up the communication. Nobody was quiet today, even if they were unsure of what was going on.” 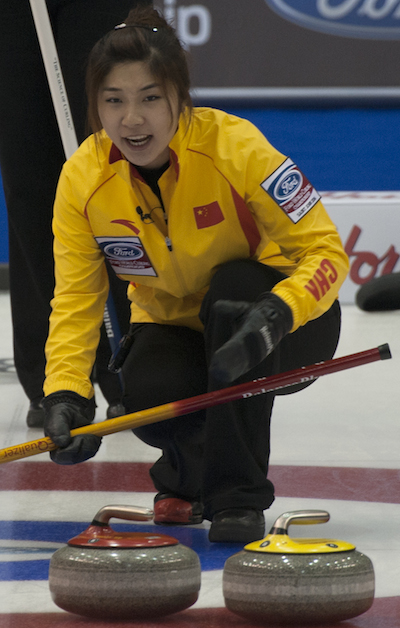 Homan, whose team was scored at a blistering 93 per cent, has yet to throw her last rock in the 10th end while wearing Canadian colours this season, a span that includes 13 wins at the Scotties Tournament of Hearts in Montreal and her five games in Saint John. “I think we’ve practised it so many times that when it comes down to it, we’re going to know exactly what to do,” said Kreviazuk with a smile. “We’re prepared for it when the time comes. We’re pretty lucky that we haven’t had to face that so far, but we’re prepared for it.” Canada returns to action on Tuesday with games against Latvia’s Evita Regža (1-4) at 9:30 a.m. and Scotland’s Kerry Barr at 7:30 p.m. In other action, Feltscher’s red-hot Swiss team remained unbeaten with its win over the Danes. Switzerland led 3-2 through four ends, then put the game with away with singles in the fifth and sixth ends and a stolen deuce in the seventh. “We did not expect to be at the top of the table after five games, but there are still some very good teams we need to play against in the round robin,” said Feltscher. “At the moment we enjoy the comfortable position and are looking forward to the next games.” China’s Sijia Liu, meanwhile, won her third straight game, making an open hit for the winning point in the 10th end to knock off Scotland’s Kerry Barr 8-7. The win improved China’s record to 3-2 while Scotland dropped to 2-3. “Team Scotland is a great team, they play very well,” said Liu. “They made some mistakes and we took our chances.” 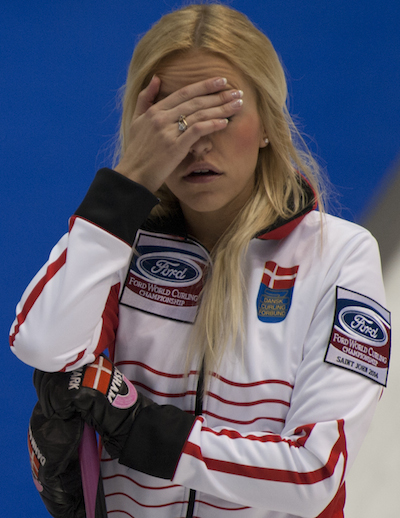 In the other game, Germany’s Imogen Lehmann won a battle of previously winless teams, picking up an 8-5 win over Anna Kubešková of the Czech Republic. Germany raced to a 5-0 lead through four ends but gave up a four in the fifth end before recovering to finish off the win, which improved its record to 1-4. The Czechs dropped to 0-5. Sweden’s Margaretha Sigfridsson (4-1), South Korea’s Ji-sun Kim (3-2), Russia’s Anna Sidorova (3-2) and Latvia all had byes in the evening draw. The 2014 Ford Worlds continue on Tuesday with draws at 9:30 a.m., 2:30 p.m. and 7:30 p.m. (all times Atlantic). All Canadian games and the playoff rounds for the 2014 Ford World Women’s Curling Championship will be televised on TSN/RDS/RDS2, the official broadcasting partner of the Season of Champions. Live scoring is available at: www.curling.ca/scoreboard/?e=58 To purchase tickets to the Ford World Women’s Curling Championship, presented by Booster Juice, go to: www.curling.ca/2014worldwomen-en/tickets/ The French version of this story will be available at www.curling.ca/2014worldwomen-fr/ as soon as possible. Follow @ccacurling on Twitter (#FWWCC) for updates during the 2014 Ford Worlds.