Rachel Homan’s two-time defending Canadian champs from Ottawa — third Emma Miskew, second Alison Kreviazuk, lead Lisa Weagle, alternate Stephanie LeDrew, team coach Earle Morris, national coach Elaine Dagg-Jackson — romped to an 8-2 win over Madeleine Dupont of Denmark at Harbour Station in Saint John, N.B., to help wash away the bad taste of Sunday night’s loss to Switzerland’s Binia Feltscher that ended a 15-game win streak. With the win, Canada improved to 3-1, within hailing distance of the 4-0 Swiss, who had the bye on Monday afternoon. “Last night was a rougher game for us, but we had a really good debrief as a team and talked about the little things that we needed to do differently, and it felt really good to come out with a win today and play really well,” said Weagle. “I think the biggest thing was communication; we found we were just a little bit quiet in the last game, and I think we play our best when we’re all talking and sharing information about lines and weights, and I think we did that really well in that game. Everyone on the team played great; our communication was the way we wanted it to be, so we’re really happy with the effort we put out there today.” Canada was never threatened by the Danes, who dropped to 1-3 with the loss. The Canadians opened with two in the first, then proceeded to steal singles in the next three ends and added a stolen deuce in the fifth to put the game out of reach. 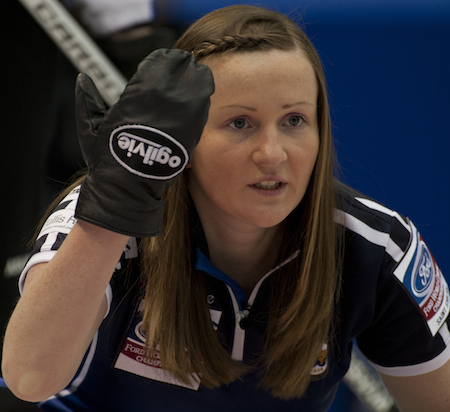 Team Canada is aiming to improve on its bronze-medal result at last year’s World Women’s Championship in Riga, Latvia. “We’ve had another year under our belts, and we’ve gone through a lot of experiences, wins and losses together,” said Weagle. “I think having been at the Worlds once has given us some good experience that’s really helping us here.” In other afternoon action, Sweden’s Margaretha Sigfridsson polished off a two-win day, making short work of Latvia’s Evita Regža with a 10-3 triumph. Sweden improved to 4-1 with the win, while Latvia dipped to 1-4. “Especially since we lost to Russia yesterday, it felt really important to go with two wins today,” said Maria Prytz, who throws fourth stones for the Swedes. “I think we’re very happy with that. Our confidence hasn’t changed. We have good confidence; we have played in a lot of championships the last few years, and we know we’re a good team. If we just go and do our job, we’ll be in the playoffs. But you have to take it one game at a time. There are many good teams here; you can’t relax, you have to focus on every game. If we do that, we should be fine.” 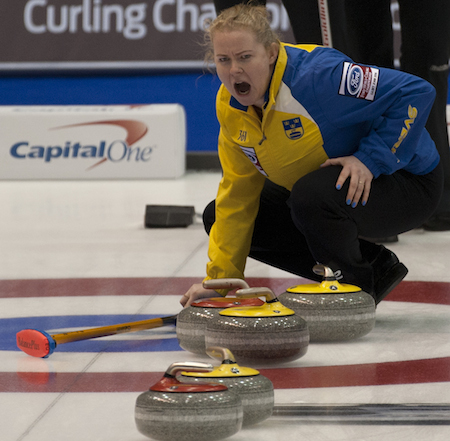 Scotland’s Kerry Barr, meanwhile, picked up her second straight victory, hanging tough for a 6-4 victory over Anna Kubešková of the Czech Republic. The Scots evened their record at 2-2, while the Czechs dropped to 0-4. “We’re getting better and better; we’re always slow starters and if we keep tightening up, there’s no reason that we can’t keep winning,” said Barr. “That was a good start for us today, we got out of the right side of the bed this morning, and we love the Irish, so we wanted to win for St. Patrick’s Day.” In the other Monday afternoon game, South Korea’s Ji-sun Kim needed an extra end to beat Russia’s Anna Sidorova 6-5. The Russians had stolen two in the 10th to force extra time, but the South Koreans would prevail in the 11th, leaving both teams with 2-2 records. Allison Pottinger of the United States (3-1), Sijia Liu of China (2-2) and Germany’s Imogen Lehmann (0-4) also had byes on Monday afternoon. The 2014 Ford Worlds continue on Monday with a draw at 7:30 p.m. (all times Atlantic). All Canadian games and the playoff rounds for the 2014 Ford World Women’s Curling Championship will be televised on TSN/RDS/RDS2, the official broadcasting partner of the Season of Champions. Live scoring is available at: www.curling.ca/scoreboard/?e=58 To purchase tickets to the Ford World Women’s Curling Championship, presented by Booster Juice, go to: www.curling.ca/2014worldwomen-en/tickets/ The French version of this story will be available at www.curling.ca/2014worldwomen-fr/ as soon as possible. Follow @ccacurling on Twitter (#FWWCC) for updates during the 2014 Ford Worlds.