Team Canada is part of a three-way logjam at the top of the standings at the Ford World Women’s Curling Championship, presented by Booster Juice. 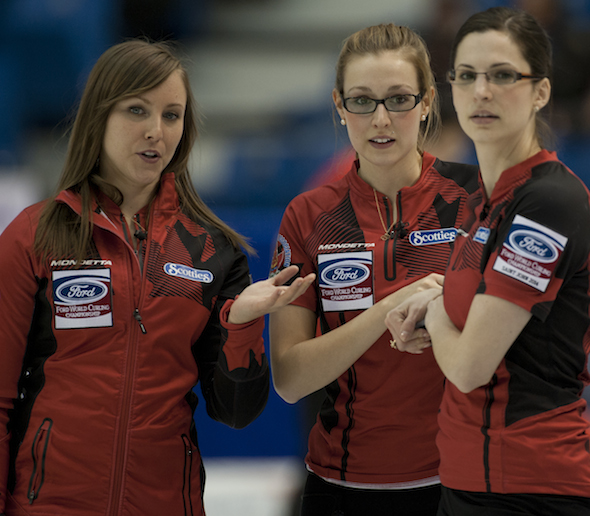 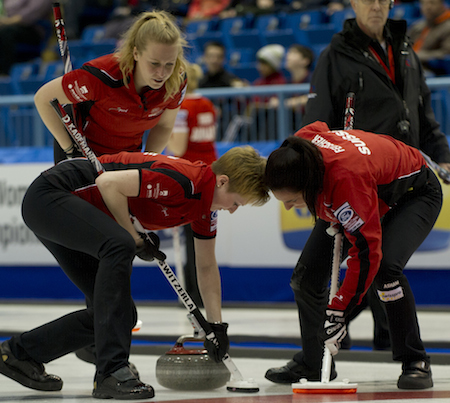 “It was a good day. We played well — two solid games by our team,” said Homan, who was scored at 90 per cent against a stubborn Scottish squad that dropped to 2-5 after the loss. “We’re not playing a hundred per cent, but we’re reading the lines and learning the lines when we need to. You definitely put value in those wins where you don’t play a hundred per cent. You kind of have to grind it out; you don’t get to quit early and you have to keep grinding out the wins and make sure that you’re thinking of the scoreboard and not getting ahead of yourself. “I would have liked a couple shots back, just an inch here or there, but I’m greedy,” she added with a laugh. “We were on the tolerant side of where I wanted to be.” Team Canada has four more round-robin games remaining on the docket, with Germany’s Imogen Lehmann (1-6) at 9:30 a.m. and South Korea’s Ji-sun Kim (5-2) at 2:30 p.m. on the docket for Wednesday, before closing out against China’s Sijia Liu (5-2) and the Swedes on Thursday. “We’re not looking ahead,” said Weagle. “We have four more games, I think? Each game is important, so we’re not looking ahead at all. I don’t even know who we play tomorrow.” Switzerland, which dropped its first game of the championship earlier on Tuesday against South Korea, bounced back nicely against the faltering U.S. squad, which saw its losing streak extended to four games after going 3-0 to open the Ford Worlds. The Swiss stole two in the first, one apiece in the second and third ends and two more in the fourth and never looked back. “The team from the United States played a better second half,” said Swiss vice-skip Irene Schori. “Hence, we almost lost our lead of three points. At the end it was closer than we wanted to have it after leading 6-0 after four ends.” China, meanwhile, stretched its winning streak to five games with a 6-4 win over Germany’s Imogen Lehmann, with a steal of two in the fifth end the turning point. The Germans dropped to 1-6 with the loss. 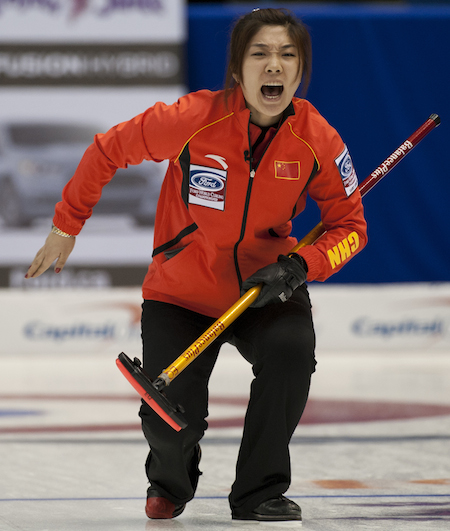 “We’re feeling so good,” said Liu. “I think everybody together (made the difference in this match), and we’re feeling very good.” In the other Tuesday night game, Anna Kubešková of the Czech Republic picked up her first win after six losses, doubling Denmark’s Madeleine Dupont 8-4 thanks to a fifth-end steal of three. The Danes were 1-6 after the loss. “It’s an amazing thing, I must say,” said Kubešková. “We’re very happy because the earlier losses are very frustrating, so it’s a great win for us. The great thing for us is the experience, even from the losses. We’d like to do our best to win some more games, and we’ll see how it goes.” South Korea, Russia’s Anna Sidorova (5-2) and Latvia’s Evita Regža also had byes on Tuesday night. The 2014 Ford Worlds continue on Wednesday, with draws scheduled for 9:30 a.m., 2:30 p.m. and 7:30 p.m. All Canadian games and the playoff rounds for the 2014 Ford World Women’s Curling Championship will be televised on TSN/RDS/RDS2, the official broadcasting partner of the Season of Champions. Live scoring is available at: www.curling.ca/scoreboard/?e=58 To purchase tickets to the Ford World Women’s Curling Championship, presented by Booster Juice, go to: www.curling.ca/2014worldwomen-en/tickets/ The French version of this story will be available at www.curling.ca/2014worldwomen-fr/ as soon as possible. Follow @ccacurling on Twitter (#FWWCC) for updates during the 2014 Ford Worlds.