South Korea’s Ji-sun Kim did the rest of the field a large favour on Tuesday afternoon at the Ford World Women’s Curling Championship, presented by Booster Juice. 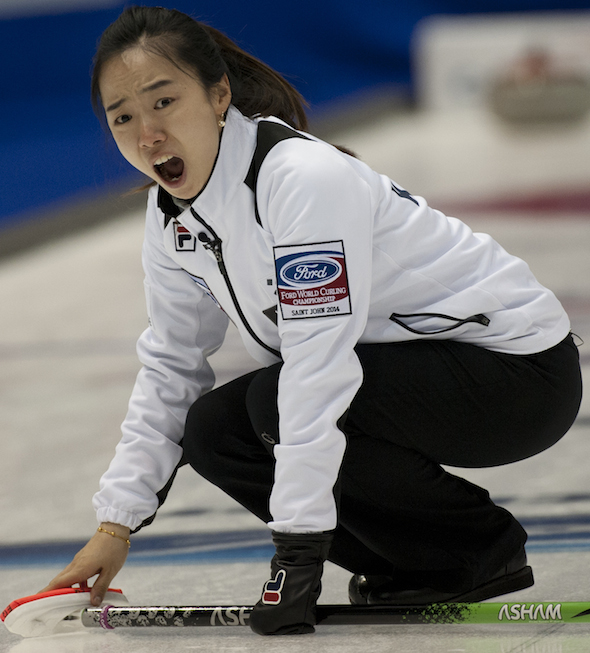 The South Koreans scored five in the eighth end to complete a 9-2 win over Switzerland’s Bina Feltscher at Harbour Station in Saint John, N.B., handing the Swiss their first loss in the 12-team round-robin competition. That result, combined with Sweden’s Margaretha Sigfridsson racking up an 11-4 triumph over Germany’s Imogen Lehmann, left the 6-1 Swedes alone in top spot, with Switzerland dropping into a tie for second place with Canada’s Rachel Homan at 5-1; the Canadians had the bye in the afternoon draw. Kim’s team was able to handle what has been a tricky outside sheet of ice — the key to the victory, according to the skip. 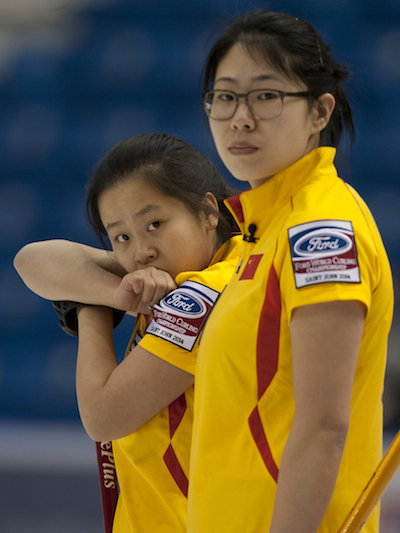 “Today the ice conditions were difficult but we were able to figure it out to win,” she said. “It was a little straight, and Switzerland throws more rotation, so we were helped by that.” South Korea improved to 5-2 with the victory, tied with Russia’s Anna Sidorova and firmly in the hunt for one of the four available playoff berths. “It was very important. If we had lost to Switzerland, maybe we wouldn’t make the playoffs. But with the win, we are hopeful for the playoffs. Sweden fell behind Germany early, giving up single points in the first two ends before rallying with three in the third end and two more in the fifth to give the Germans their fifth loss in six games. “We had a really good day today, and we played some really good games,” said Maria Prytz, who throws fourth stones for the Swedes. “Both this morning and this afternoon, the games were quite tight in the beginning and then we had a few really good ends, so that was nice.” The Swedes are in strong position for a playoff berth in hopes of Sigfridsson claiming her first World Championship gold medal after four previous silvers. “It feels quite good right now,” said a smiling Prytz. “But there are always things you can be better on. The ice is very good and keen, and we have to focus on not being too heavy with our draws. So maybe that’s what we need to improve.” Russia capped a two-win Tuesday with an 8-5 triumph over Allison Pottinger of the United States, whose team took its third straight loss after opening the Ford Worlds with three straight wins. Russia scored a deuce in the seventh and stole two in the 10th when Pottinger missed on a Hail Mary takeout attempt.

Russian skip Anna Sidorova wasn’t happy with this shot, but she was happy with the win on Tuesday over the United States. (Photo, CCA/Michael Burns)

“That was a really important win for us — even if we have the same wins as the U.S. (at the conclusion of the round robin) we will be ahead of them now (on a tiebreaker),” said Sidorova. “It’s been a really tough season. We want to be successful at every championships and that means we spend a lot of energy and power and are trying to give everything to win. We still have the desire to win medals, and that’s the main thing, so we’ll think about tiredness later.” In the other Tuesday afternoon game, China’s Sijia Liu won her fourth straight game, downing Latvia’s Evita Regža 9-5. China improved to 4-2 while Latvia dropped to 1-6. Scotland’s Kerry Barr (2-4), Denmark’s Madeleine Dupont (1-5) and the Czech Republic’s Anna Kubešková (0-6) also had byes in Draw 10. The 2014 Ford Worlds continue on Tuesday with a draw at 7:30 p.m. (all times Atlantic). On Wednesday, draws are scheduled for 9:30 a.m., 2:30 p.m. and 7:30 p.m. All Canadian games and the playoff rounds for the 2014 Ford World Women’s Curling Championship will be televised on TSN/RDS/RDS2, the official broadcasting partner of the Season of Champions. Live scoring is available at: www.curling.ca/scoreboard/?e=58 To purchase tickets to the Ford World Women’s Curling Championship, presented by Booster Juice, go to: www.curling.ca/2014worldwomen-en/tickets/ The French version of this story will be available at www.curling.ca/2014worldwomen-fr/ as soon as possible. Follow @ccacurling on Twitter (#FWWCC) for updates during the 2014 Ford Worlds.