Russia’s Anna Sidorova and her team from Moscow are making a serious run at a long-awaited medal at the Ford World Women’s Curling Championship, presented by Booster Juice. 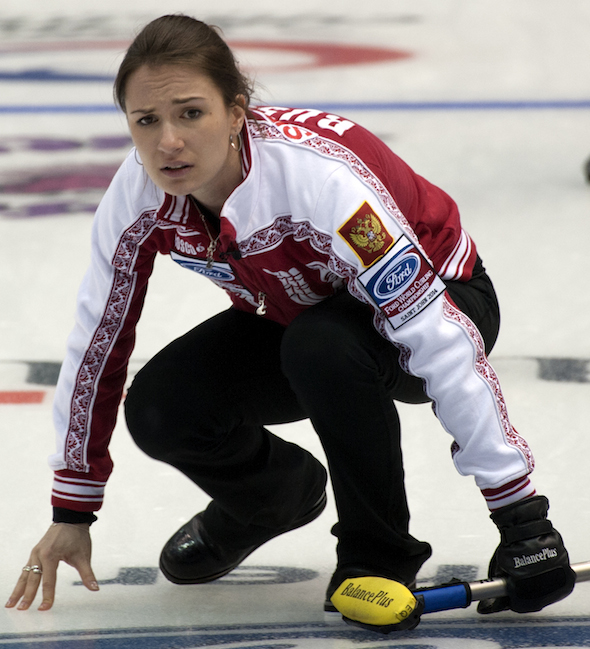 Russian skip Anna Sidorova has her team on the verge of a playoff position at the 2014 Ford Worlds. (Photo, CCA/Michael Burns)

The Russians have had success at most levels of curling, including winning the European championship earlier this season in Norway, but a trip to the Ford Worlds podium has eluded them. But a pair of impressive wins on Wednesday at Harbour Station in Saint John, N.B., have the Russians at 7-2 and on the verge of locking down a place in the playoffs. 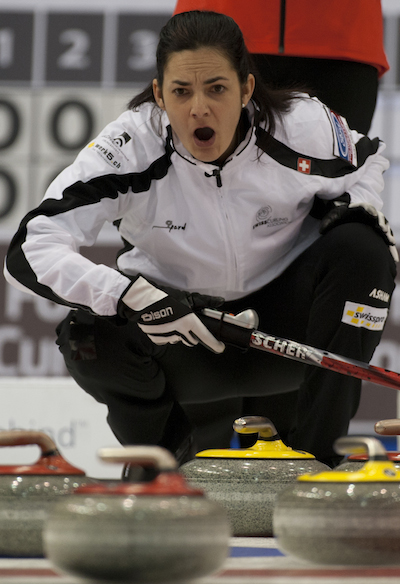 Wednesday, suffice to say, was a gooder, as far as the Russians were concerned — a 7-4 win over Denmark’s Madeleine Dupont in the afternoon draw followed by a 10-2 Sharknado-like thrashing of China’s Sijia Liu in the evening draw. “We had the same win total as China (both entered with 6-2 records), so we were pretty serious to play confident,” said Sidorova. “We just wanted to show all our best and trying to be better and better from game to game.” The Russians are tied for third place in the 12-team round-robin standings with Sweden’s Margaretha Sigfridsson at 7-2, and will finish round-robin play on Thursday against Switzerland’s Binia Feltscher (8-1) and Anna Kubešková of the Czech Republic (2-7). Can her team get better? “There are always improvements,” said a smiling Sidorova. “Even if you played the final, you have another final. Me, personally, I just want to win everything in the world. I was born like this, trying to get better and better day to day.” The Swiss moved into a tie for first place with Team Canada’s Rachel Homan at 8-1 thanks to a 5-3 win over Sweden; Canada had the bye. Both Canada and Switzerland are assured of tiebreaker berths. The Swiss stole a crucial point in the seventh end en route to the win. “Yeah, that’s awesome. To win tonight against Sweden that’s very great. Yeah, we’re feeling good,” said smiling Swiss third Irene Schori, whose team hasn’t strayed from its strategy of keeping things clean and wide open. “We planned to play with no risk, just easy shots and it works. Maybe it’s a little bit boring, but that’s our game and we win.” In other action on Wednesday night, South Korea’s Ji-sun Kim stole single points in the sixth and seventh ends for a 9-4 win over Germany’s Imogen Lehmann. The Koreans improved to 6-3 while Germany dropped to 1-8. 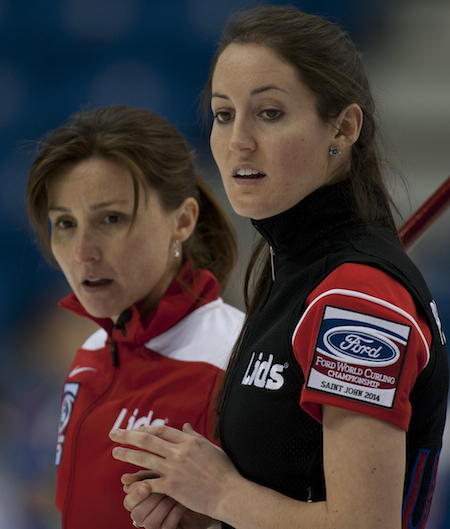 In the other game, Allison Pottinger of the U.S. kept her playoff hopes alive with a 7-3 win over Latvia’s Evita Regża. The U.S. sits at 5-4 and needing to win twice on Wednesday and get help elsewhere in the standings to force a tiebreaker. Latvia dropped to 1-8. Canada caps its round-robin schedule with games on Thursday against at 2:30 p.m. and the Swedes at 7:30 p.m. The top four teams advance to the Page playoffs, which see the first-and-second place teams playing for a berth in Sunday’s gold-medal game (7:30 p.m., all times Atlantic). The loser of the one-two game drops to the semifinal (Saturday, 2 p.m.) against the winner of the Page three-four game. The semifinal loser and Page three-four loser will play for the bronze medal Sunday at noon. Besides Canada, the Czechs, Danes (1-8) and Scotland’s Kerry Barr (2-7) had byes. The 2014 Ford Worlds continue on Thursday, the final day of round-robin play, when draws are set for 9:30 a.m., 2:30 p.m. and 7:30 p.m. All Canadian games and the playoff rounds for the 2014 Ford World Women’s Curling Championship will be televised on TSN/RDS/RDS2, the official broadcasting partner of the Season of Champions. Live scoring is available at: www.curling.ca/scoreboard/?e=58 To purchase tickets to the Ford World Women’s Curling Championship, presented by Booster Juice, go to: www.curling.ca/2014worldwomen-en/tickets/ The French version of this story will be available at www.curling.ca/2014worldwomen-fr/ as soon as possible. Follow @ccacurling on Twitter (#FWWCC) for updates during the 2014 Ford Worlds.