An evening out with friends and family, a night in the Patch listening to Signal Hill — it’s the perfect way for Team Canada to celebrate a two-win Wednesday at the 2014 Ford World Women’s Curling Championship, presented by Booster Juice. 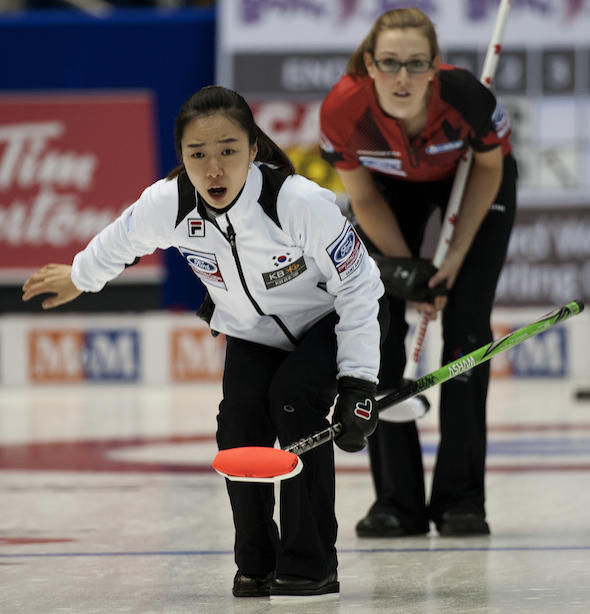 Rachel Homan’s Canadian team from Ottawa — third Emma Miskew, second Alison Kreviazuk, lead Lisa Weagle, alternate Stephanie LeDrew, team coach Earle Morris and national coach Elaine Dagg-Jackson — capped a busy stretch of curling with a 10-3 thrashing of South Korea’s Ji-sun Kim on Wednesday at Harbour Station in Saint John, N.B., and will enjoy a bye in the next two draws. With the win, Canada improved to 8-1, alone in first place in the 12-team round-robin standings, with two other one-loss teams — Sweden’s Margaretha Sigfridsson and Switzerland’s Binia Feltscher — both having played one fewer game. 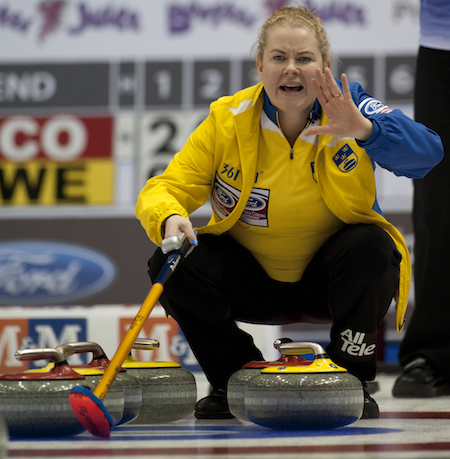 “Oh my God, I am so ready for a break,” said Homan with a smile. “I can’t wait to NOT curl for 24 hours. We need a break, for sure. Three games in a row, it’s a long haul, and not much sleep, either. It was a big grind this morning against Germany (a 7-5 win thanks to a stolen deuce in the 10th end), so we’ve definitely earned some rest. We’ll have some dinner with friends and family tonight and then we’ll go see Signal Hill in the Patch.” Canada played one of its most effective games of the championship, outcurling the 5-3 Koreans by a 90-68 margin in shooting percentages. Canada scored deuces in the second and seventh ends, and threes in the third and eighth ends, the latter producing handshakes. “We played on that sheet twice before, and we struggled with how to throw the rocks, so we felt like this time we actually had it under control and we were able to read the conditions, so we feel pretty good about that,” said Miskew. “We wanted to come out strong, and we felt that we knew the ice, and we weren’t sure how much they knew about the ice, so we felt like we could use that to our advantage. They’re a great team, but we were able to capitalize on some of their mistakes. We were pretty solid out there.” Canada caps its round-robin schedule with games on Thursday against China’s Sijia Liu (6-2) at 2:30 p.m. and the Swedes at 7:30 p.m. in a game that could decide first place in the round-robin standings. “Two great teams,” nodded Miskew. “We’re just going to take it like any other day. We haven’t really thought a whole lot about who we’re playing or what their strengths or weaknesses are. We’ve just been trying to make eight shots each end, and we’re going to go out tomorrow and do the same thing.” The top four teams advance to the Page playoffs, which see the first-and-second place teams playing for a berth in Sunday’s gold-medal game (7:30 p.m., all times Atlantic). The loser of the one-two game drops to the semifinal (Saturday, 2 p.m.) against the winner of the Page three-four game. The semifinal loser and Page three-four loser will play for the bronze medal Sunday at noon. Sweden needed an extra end to take down Kerry Barr’s Scottish team 8-7. Sigfridsson didn’t need to throw her last rock in the 11th when Barr was heavy on a draw attempt. 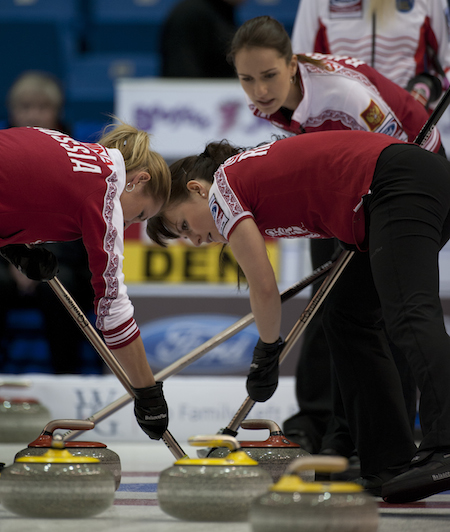 “I feel good and a little bit relieved as well,” said Sigfridsson. “It was a really tight game and we’re glad that we won that. Scotland played really well today and I think it’s the first team that has liked the red stones on that sheet.” In other action, Russia’s Anna Sidorova improved her playoff hopes with a 7-4 win over Denmark’s Madeline Dupont. The Russians, 6-2 after the win, stole two in the third end and one more in the fourth to add to the misery of the Danes, who trail the pack at 1-8. “I like the consistency of play that we’re showing,” said Russian lead Ekaterina Galkina. “I really hope that’s the key, because this is really a long competition. Twelve teams, and they’re all very good teams, the best in their country. I think this is the key to being successful here.” In the other game, Anna Kubešková of the Czech Republic improved to 2-7 with a 10-2 win over Latvia’s Evita Regža (1-7). Besides Switzerland, China’s Sijia Liu (6-2), Allison Pottinger of the United States (4-4), Germany’s Imogen Lehmann (1-7) and Denmark’s Madeleine Dupont (1-7) had byes on Wednesday afternoon. The 2014 Ford Worlds continue on Wednesday with a draw scheduled for 7:30 p.m. (all times Atlantic). On Thursday, the final day of round-robin play, draws are set for 9:30 a.m., 2:30 p.m. and 7:30 p.m. All Canadian games and the playoff rounds for the 2014 Ford World Women’s Curling Championship will be televised on TSN/RDS/RDS2, the official broadcasting partner of the Season of Champions. Live scoring is available at: www.curling.ca/scoreboard/?e=58 To purchase tickets to the Ford World Women’s Curling Championship, presented by Booster Juice, go to: www.curling.ca/2014worldwomen-en/tickets/ The French version of this story will be available at www.curling.ca/2014worldwomen-fr/ as soon as possible. Follow @ccacurling on Twitter (#FWWCC) for updates during the 2014 Ford Worlds.