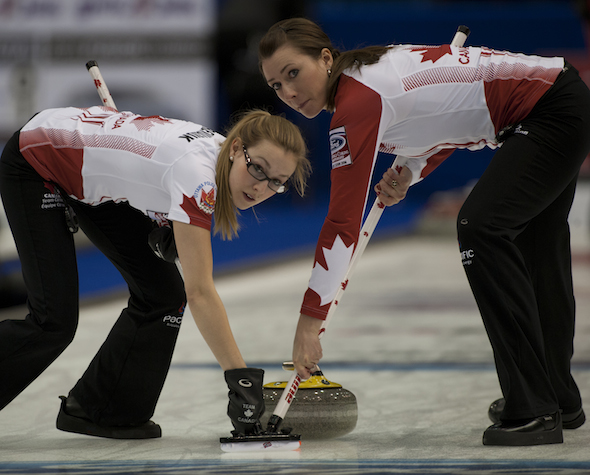 But we do know this: Team Canada has locked up a playoff berth at the 2014 Ford World Women’s Curling Championship, presented by Booster Juice, and will play in either the Page one-two or Page three-four game on Friday night at Harbour Station at 7:30 p.m. (all times Atlantic). The opponent and final placing won’t be known until after the conclusion of Thursday night’s final round-robin draw in the 12-team competition, and a potential tiebreaker on Friday afternoon. But the fact remains that Canada will be in the final four, an outcome clinched by a 6-4 win over Sijia Liu of China on Thursday afternoon, boosting Canada’s record to 9-1, tied in wins with Switzerland’s Binia Feltscher (9-2). A Canadian victory in Thursday night’s final round-robin draw, at 7:30 p.m., over Sweden’s Margaretha Sigfridsson (8-2) would lock up first place for Rachel Homan’s team from Ottawa — third Emma Miskew, second Alison Kreviazuk, lead Lisa Weagle, alternate Stephanie LeDrew, team coach Earle Morris and national coach Elaine Dagg-Jackson. “Our goal is the 1-2,” said Homan. “Our goal’s not the 3-4 so our job is not done yet.” Two ends played a pivotal role in the Canadian win over China (6-5). In the sixth end, Liu rolled out on her hit for a single, leaving Canada a stolen point to go up 3-1. And two ends later, Canada scored a three to put the game out of reach. “I think that was a good win for us,” said Weagle. “It was really close for the beginning, kind of back and forth and we were able to play a really great eighth end and crack it open and hang on until the end. We were patient. They were playing really well. They made so many runbacks and they’re a really great team so we were really happy that we were able to open it up a little in the eighth end.” Also locking up a playoff spot were the Swiss, who had to grind out a 9-5 victory over Anna Kubešková of the Czech Republic (2-8). The Czechs took three in the second end, but Switzerland rebounded in impressive fashion, stealing one in the sixth and two in the ninth. 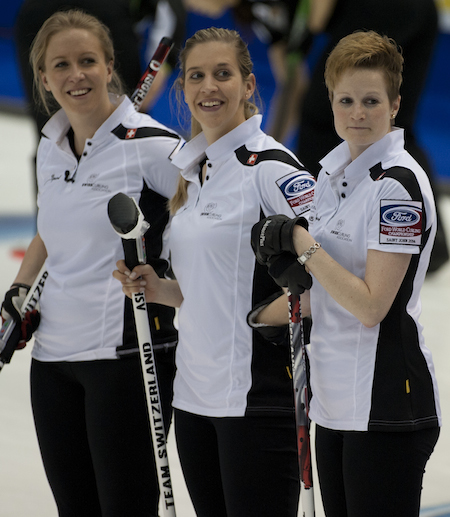 “That’s the important thing, we are very happy about that,” said Swiss third Irene Schori of the playoff spot. “We never thought that we will get into the playoffs before this championship and now we are there.” In the other afternoon games, Allison Pottinger of the U.S. (6-5) beat  Scotland’s Kerry Barr (2-8) 8-4, while Germany’s Imogen Lehmann (3-8) doubled Denmark’s Madeleine Dupont (1-9) 10-5. A win by South Korea’s Ji-sun Kim (7-3) over Scotland, combined with a loss by either Anna Sidorova of Russia (8-2) or Sweden, or both of them, would result in a tiebreaker Friday at 2:30 p.m. The top four teams advance to the Page playoffs, which see the first-and-second place teams playing for a berth in Sunday’s gold-medal game (7:30 p.m., all times Atlantic). The loser of the one-two game drops to the semifinal (Saturday, 2 p.m.) against the winner of the Page three-four game. The semifinal loser and Page three-four loser will play for the bronze medal Sunday at noon. Besides Sweden, Russia and South Korea, Latvia’s Evita Regža (1-9) had a bye in the afternoon draw. All Canadian games and the playoff rounds for the 2014 Ford World Women’s Curling Championship will be televised on TSN/RDS/RDS2, the official broadcasting partner of the Season of Champions. Live scoring is available at: www.curling.ca/scoreboard/?e=58 To purchase tickets to the Ford World Women’s Curling Championship, presented by Booster Juice, go to: www.curling.ca/2014worldwomen-en/tickets/ The French version of this story will be available at www.curling.ca/2014worldwomen-fr/ as soon as possible. Follow @ccacurling on Twitter (#FWWCC) for updates during the 2014 Ford Worlds.