Kim’s team — vice-skip (and last-rock thrower) Un-chi Gim, second Seul-Bee Lee and lead Min-ji Um — upset Olympic silver-medallist Margaretha Sigfridsson of Sweden 7-5 in a fourth-place tiebreaker at Harbour Station in Saint John, N.B. With the win, South Korea heads to the Page 3-4 game against Russia’s Anna Sidorova Saturday at 9 a.m. (all times Atlantic). “Maybe we have no nervousness and can just enjoy the game,” said Kim of Saturday’s assignment. Gim, who had a wonderful game against the experienced Swedes, shooting 88 per cent, made a lovely short raise to the four-foot to clinch the win. “We enjoyed today’s game,” said Kim with a smile. “Maybe we were lucky.” There was nothing lucky, in fact, as the Koreans, who are in the playoffs for the second time in women’s worlds history (Kim’s team finished fourth in Lethbridge, Alta., two years ago) simply did a wonderful job in managing the house and the scoreboard and never allowing Sweden to build an end. “I think we played a good game and Korea played well and we missed a few key shots,” conceded Sigfridsson. 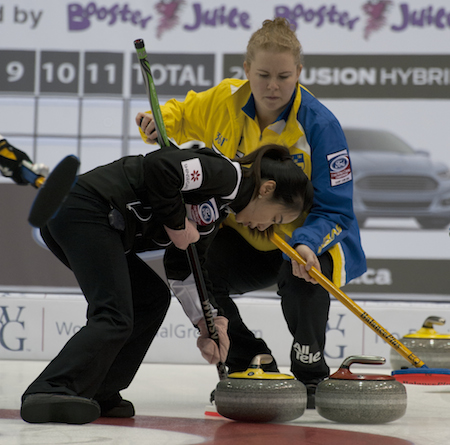 Earlier, Gim made what turned out to be the difference-making shot, barely getting by a centre guard to remove a Swedish stone and leave three South Korean counters to take a 5-3 lead. Sweden couldn’t manage to break the South Korean defence down the stretch, managing only single points in the seventh and ninth ends. “We wanted a simple game with low points,” said Kim. “The scoreboard was very tight.” Sigfridsson admitted the long season may have had an effect as her team lost its final round-robin game on Thursday night, and couldn’t recover for the tiebreaker. “Yes, of course,” she agreed. “But still we should be able to manage to win the games and together get the energy that is needed to go into the playoffs.” Team Canada’s Rachel Homan and her Ottawa crew — third Emma Miskew, second Alison Kreviazuk, lead Lisa Weagle, alternate Stephanie LeDrew, team coach Earle Morris and national coach Elaine Dagg-Jackson — return to the ice later on Friday for the Page playoff 1-2 game against Switzerland’s Binia Feltscher. Canada finished with 10-1 record, while the Swiss, who were responsible for Canada’s lone defeat, were at 9-2. The winner of the Page 1-2 game will go straight through to Sunday’s 7:30 p.m. gold-medal game, while the loser will drop to the semifinal Saturday at 2 p.m. against the winner of the Page 3-4 game. The semifinal loser and the Page 3-4 loser will play for the bronze medal Sunday at noon. All playoff rounds for the 2014 Ford World Women’s Curling Championship will be televised on TSN/RDS/RDS2, the official broadcasting partner of the Season of Champions. Live scoring is available at: www.curling.ca/scoreboard/?e=58 To purchase tickets to the Ford World Women’s Curling Championship, presented by Booster Juice, go to: www.curling.ca/2014worldwomen-en/tickets/ The French version of this story will be available at www.curling.ca/2014worldwomen-fr/ as soon as possible. Follow @ccacurling on Twitter (#FWWCC) for updates during the 2014 Ford Worlds.