Round robin complete at University Championships

The fourth day of round robin play for the 2014 CIS/CCA Curling Championships continued Saturday morning at 9 a.m. CST in Regina, Sask., at the Callie Curling Club. Memorial University of Newfoundland Sea Hawks battled against the University of Alberta Golden Bears. Both teams were tied at a 3-3 record going into the game, and with a win by the Golden Bears, the Sea Hawks dropped down to fourth place sending Alberta onto the semi-final game against Wilfrid Laurier (6-1). Alberta took an early 4-1 lead after the fourth end. Memorial fought back and with a stolen point in the eighth end they were trailing Alberta 5-4. The Golden Bears secured a 7-4 lead after the ninth, leaving the Sea Hawks in a tough three point deficit going into the 10th end. At Memorial skip Colin Thomas’ rocks the Sea Hawks were sitting two. But with a freeze by Alberta’s Brendan Bottcher (skip), Thomas was left with no options and gave Alberta the win.

University of Manitoba Bisons (5-1) took on the host team University of Regina Cougars (2-4) in their final draw of the round robin. Manitoba was sitting in first placed tied with Wilfrid Laurier University Golden Hawks. After four ends, Regina led 4-1, while Manitoba struggled to get points with hammer and trailed 6-3 after the seventh end. With a short draw attempt by Regina on their last rock in the eighth, Manitoba stole three to tie up the game 6-6. In the ninth end, Regina was able to take a one-point lead. In the 10th end with hammer, Manitoba skip Matt Dunstone decided on a double after Regina’s Catlin Schneider (skip) made a tough draw to the four foot to sit one. Dunstone’s hit was good, giving the Bisons three points and the win with a 9-7 final score. The loss for Regina gives them an eighth place finish in the 2014 championship. The win gives Manitoba a first place standing and a berth to the 2014 CIS/CCA Curling Championship men’s final Sunday at 5 p.m. CST. In their last games of the championship, the Saint Mary’s University Huskies (2-4) were successful over the University of Toronto Varsity Blues (2-4). At the fifth end break, Saint Mary’s had an 8-1 lead after stealing three points in both the fourth and fifth ends. Toronto pushed back, stealing three points in the eighth and one in the ninth to trail 9-7. In the 10th end, SMU was able to take one point for the win. With a 10-7 final score, the Huskies finished the championship in fourth place with a 3-4 record, and the Blues in sixth place with a 2-5 record. Brock University Badgers (2-4) went up against Wilfrid Laurier University Golden Hawks (5-1) in their final draw of the round robin. Going into the game, Laurier was tied with the Manitoba Bisons for first place. The Golden Hawks had a 9-1 lead going into the fifth end break, and continued to dominate over the Badgers who shook hands after eight ends, trailing 11-3. With the loss, Brock finished the championship in seventh place with a 2-5 record. The win sends Laurier to the semifinal match Saturday night at 7 p.m. CST. On the women’s side, the University of Alberta Pandas (5-1) took on host team University of Regina Cougars (2-4). Going into the game, the Pandas were tied for first place with the Carleton University Ravens and Wilfrid Laurier University Golden Hawks. Tied 2-2 after the third end, Alberta took a 5-2 lead going into the fifth end break. Regina was never able to come ahead as the Pandas were sitting at an 8-4 lead after the ninth and ran the Cougars out of rocks in the 10th. With the 8-4 win, Alberta sits in first place with a 6-1 record and move onto the 2014 CIS/CCA Curling Championships women’s final on Sunday at 1:30 p.m. CST. The loss for the Cougars gives them a 2-5 record. Regina finished the championship in sixth place. Wilfred Laurier Golden Hawks (5-1) went up against the University of PEI Panthers (1-5). In a surprising upset, the Panthers defeated the Golden Hawks 7-4 in nine ends. Going into the game, Laurier was tied with Alberta and Carleton for first place. PEI led 3-1 going into the fifth end break, but held Laurier to only three points in the back half. The Panthers took two in the seventh and ninth ends to secure the win. The loss for Laurier means a spot in the semifinal match Saturday night at 7 p.m. CST. PEI finishes their 2014 championship run in seventh place with a 2-5 record. 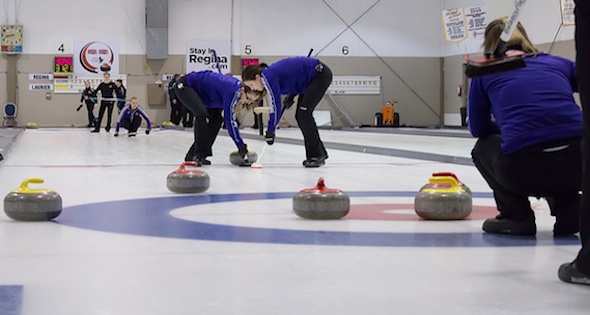 In their final game of the round robin, the University of Toronto Varsity Blues (2-4) challenged the Carleton University Ravens (5-1) who were tied for first place with Alberta and Laurier. Carleton pulled ahead early with a 4-0 lead after the third. Toronto rebounded with three points in the third end. The two teams traded ends and were tied 5-5 after the eighth. Carleton blanked the ninth, and with a two-point steal in the 10th, the Varsity Blues took a 7-6 win. The upset sends Carleton to the semifinal match against Wilfrid Laurier Saturday night at 7 p.m. CST. The win for Toronto gave them fifth place in the 2014 CIS/CCA Curling Championships. Thompson Rivers University Wolfpack (3-3) dominated over University of New Brunswick Varsity Reds (1-5) in both teams’ final game of the 2014 CIS/CCA Curling Championship. After stealing in three ends, Thompson had a strong 6-0 lead after the fourth. New Brunswick was only able to come back with one point in the fifth and one in the seventh. With a five-point gain in the eighth end by the Wolfpack, the Varsity Reds shook hands and gave Thompson Rivers a 12-2 victory. The win gave TRU a 4-3 record and fourth place in the championship, and UNB finished in eighth place with a 1-6 record. The semifinal games will see the Wilfrid Laurier Golden Hawks (6-1) take on the Alberta Golden Bears (4-3) on the men’s side and Wilfrid Laurier Golden Hawks (5-2) against the Carleton Ravens (5-2) on the women’s side. Both games start Saturday at 7 p.m. CST, at the Callie Curling Club in Regina, Sask. The winning teams will be invited by the Canadian Curling Association to represent Canada at the FISU 2015 Winter Universiade in Granada, Spain, Feb. 4-14. Draw results will be available at www.curling.ca while event information, including team rosters and draw schedule, can be found at www.curling.ca/2014university-en. Meanwhile, the Canadian Collegiate Athletic Association (CCAA) Curling National Championships are taking place at Soo Curlers Association in Sault. Ste. Marie, Ont., from Wednesday through Saturday.  Eight women’s and eight men’s teams are competing in the event hosted by Sault College.  For further information, visit www.ccaa.ca/national-championship-s15111.