The 2014 CIS/CCA University Curling Championship women’s final was held Sunday at 1:30 p.m. at the Callie Curling Club in Regina, Sask., and saw the University of Alberta Pandas (6-1) battle against the Carleton University Ravens (6-2). The Ravens secured a gold medal victory with a 9-4 victory in nine ends over the Pandas. 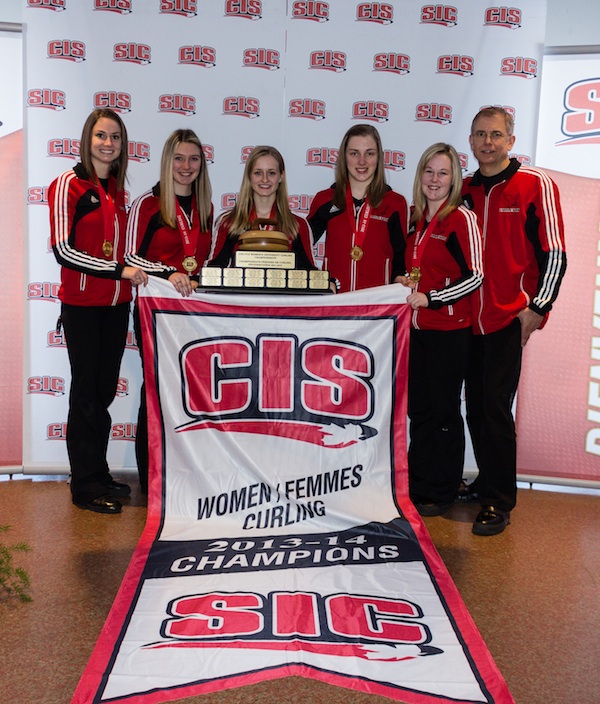 After round robin action, the 2014 Canadian Junior Champions and World Champions Alberta Pandas were sitting in first place giving them an automatic berth to the finals. Carleton travelled through the semifinals with a 6-4 win over Wilfred Laurier University to secure their spot in the gold medal match. A clean and open first end left Alberta’s skip Kelsey Rocque with a last rock hit, but it rolled out for a Carleton steal of one. The second end saw more rocks in play. Carleton skip Jamie Sinclair, with her first rock, was able to double off Alberta’s stones with a nice roll to be sitting one. A tough break on Alberta’s last rock was a lost opportunity to take three. Carleton took the steal making it a 2-0 lead for the Ravens. Sinclair stayed aggressive in the third end but Alberta’s Keely Brown (third) was able to sink one behind a guard. Sinclair was forced to a corner freeze on her first rock which ended heavy, but a mistake on Rocque’s first stone left a double opportunity for Carleton. Rocque came tight on her last rock going up against two Carleton stones in the four foot and after a measurement, Carleton jumped ahead to a 4-0 lead. The fourth end left Alberta in a tough spot to gain points as Carleton was able to keep a clean end and force Rocque to blank the end to keep hammer in the fifth. Late in the fifth end, Alberta called a timeout as they were sitting one on the button between two Carleton stones. Alberta elected to freeze, but Brown came up short and tight. After a Carleton timeout on Sinclair’s last rock, a missed shot left a port open for Alberta. Rocque came up tight to only score one and trail 4-1 going into the fifth-end break. Carleton gave Alberta more chances in the sixth as Ravens’ Laura Horton (third) came tight on both her shots giving Alberta opportunities to set up points. Sinclair was able to plug up the hole leaving Rocque with little options on her final stone. Carleton came out of the end with two points making it a 6-1 lead. The seventh end left Alberta with a double opportunity on Rocque’s first shot, putting pressure on Carleton for one of the first times throughout the game. Carleton’s last rock saw three Alberta stones in the rings leaving Sinclair to double off two and stay in the rings. Rocque was able to hit and stick giving her Pandas two points to trail by three after seven ends. Going into the eighth end with a 6-3 lead, Carleton’s Lynn Kreviazuk (second) showed her strength with a double peel. But with a missed peel on her second shot and a heavy rock by Horton, Alberta was able to sit a protected shot on top of the button. Giving up a steal of one, Carleton led 6-4 going into the ninth end with hammer. After climbing back from a five point deficit, Alberta was able to take control of the ninth end. But with a miss on Rocque’s first stone, Sinclair had a hit to sit two. With the championship on the line, Rocque’s draw came up short giving Carleton a draw for three points and a 9-4 victory. With the loss Alberta takes silver with a second-place finish in the 2014 CIS/CCA University Curling Championship with a 6-2 record. The gold medal finish for Carleton sends the squad to Granada, Spain, to represent Canada at the World University Games in 2015. Draw results are available at www.curling.ca while event information, including team rosters and draw schedule, can be found at www.curling.ca/2014university-en. 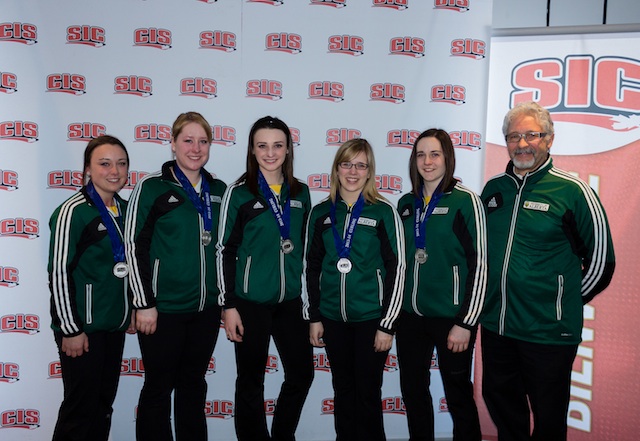