The University of Alberta Golden Bears (6-2) went up against the University of Manitoba Bisons (6-1) in the men’s final of the 2014 CIS/CCA University Curling Championship Saturday at the Callie Curling Club in Regina, Sask. The Bison came out victorious after an extra-end battle gave them a 7-5 win over the Golden Bears. Manitoba received a berth into the finals after they ended the round robin in first place with a 6-1 record. Alberta upset the Wilfrid Laurier University Golden Hawks in the semi final match with a 9-4 victory in eight ends and gained themselves a ticket to the gold medal match. Both the Golden Bears and Bisons teams included Canadian Junior Curling champions with Alberta’s Brendan Bottcher (skip), Evan Asmussen (third), and Landon Bucholz (lead) claiming the title in 2012 and Manitoba’s Matt Dunstone (skip) and Daniel Grant (second) taking the title in 2013. In the first two ends of the game, Manitoba took the opportunities to blank and carry hammer over into the third end. The third saw more rocks in play, with Manitoba sitting three at Alberta third Evan Asmussen’s second rock. His triple attempt left two Bison stones still in the rings. With a freeze by Bottcher on his last rock, Dunstone was left with a draw to the four-foot to take a 2-0 lead over the Golden Bears. A hit and roll by Dunstone in the fourth end that rolled just too far left a tak- out for Bottcher to score two and tie up at 2-2. In the fifth end, a hit and roll by Bottcher left three Alberta stones counting at the top of the house. Manitoba’s attempted double rubbed off the guard. After an Alberta time out, Bottcher settled on throwing another guard. Dunstone was left with a draw to limit the Golden Bears to a steal of one, taking a 3-2 lead at the fifth end break. The sixth end saw Manitoba miss an early advantage to bury as Grant rubbed off his own guard but Jim Coleman (third) was able to do the job. Asmussen answered with a freeze to sit for one on his last rock. In the end, Manitoba’s sweepers held the line on Dunstone’s last rock hit to secure them two points and a 4-3 lead. With a missed hit by Alberta’s Asmussen in the back half of the seventh, Manitoba was given the opportunity to secure a steal. Coleman’s throw turned out heavy giving the Golden Bears a path to the button. Dunstone opted for a hit and roll off his own rock to knock out Alberta’s stone, leaving the Bisons sitting three. Bottcher answered with a draw to the button to take one and tie the game 4-4 after seven ends. In the eighth, Alberta’s Asmussen was given an opportunity to double off Manitoba’s first and second shot stones to sit three. With Alberta again lying three at Manitoba’s last rock, Dunstone’s hit gave the Golden Bears a steal of one and a 5-4 lead over the Bisons. Down by one point in the ninth, Manitoba was forced into the position to blank the end to take hammer into the 10th. Alberta’s Thiessen cleared the house with his second shot of the tenth end causing Manitoba to restart their two point attempt. Manitoba had an opportunity for a raise run-back for the win, which over curled giving the Bisons one point and sending the game into an extra end. The 11th end saw a draw by Dunstone behind a high guard belonging to the Golden Bears. With pressure on Alberta, Bottcher drew to the top of the four-foot, but a tap-back by Dunstone left Manitoba sitting two. Bottcher was heavy on his attempted draw to the four-foot, giving Manitoba a steal of two and the gold medal victory with a 7-5 final score. The loss for Alberta gives them a silver medal in the 2014 CIS/CCA University Curling Championships with a second place 6-3 record. The win for Manitoba means a ticket to Granada, Spain to represent Canada at the World University Games in 2015 and a gold medal in the 2014 CIS/CCA championships with a 7-1 record. The winning teams will be invited by the Canadian Curling Association to represent Canada at the FISU 2015 Winter Universiade in Granada, Spain, Feb. 4-14. 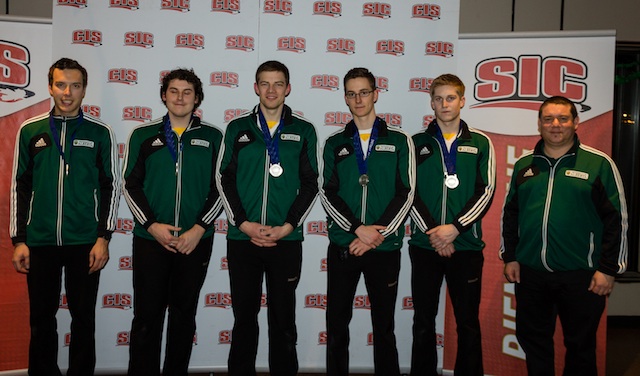