It was going to be historic, no matter what the outcome on Sunday afternoon at Harbour Station in Saint John, N.B. 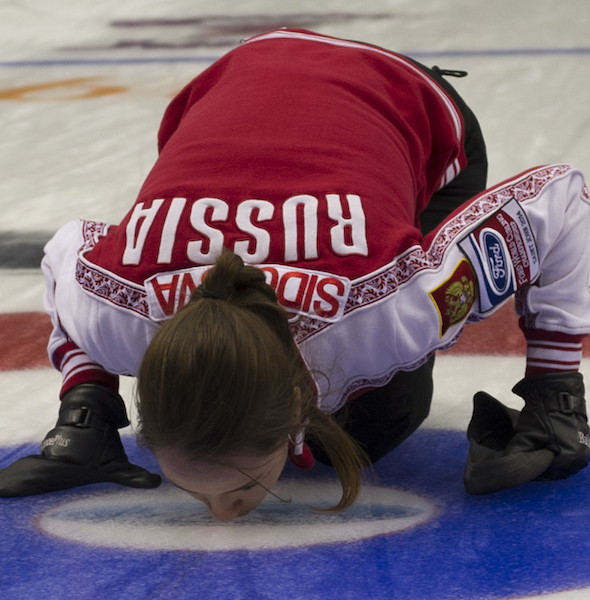 In a bronze-medal game that pitted two countries that had never won a medal at either the world men’s or world women’s championship, it was Russia’s Anna Sidorova who took that long-awaited step onto the medal podium with a thoroughly entertaining 7-6 win over South Korea’s Ji-sun Kim in in the bronze-medal game at the Ford World Women’s Curling Championship, presented by Booster Juice. Sidorova’s team from Moscow — third Margarita Fomina, second Alexandra Saitova and lead Ekaterina Galkina — recovered from giving up three in the ninth end to score a tying deuce in the 10th and stole one in the 11th when South Korean last-rock thrower Un-chi Gim was just wide on her outturn tap attempt and rolled too far and left a Russian stone biting the back of the four-foot was the winning counter. 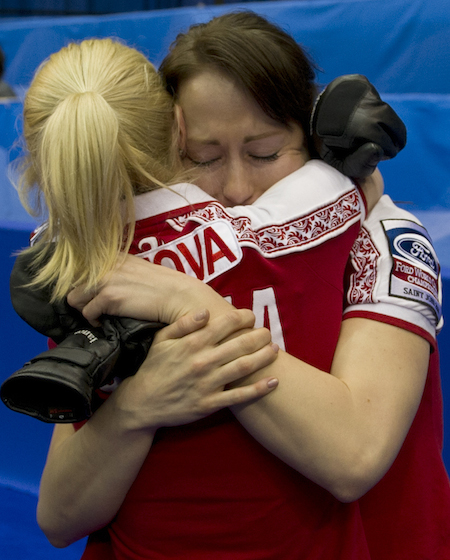 “I just don’t have enough words to describe all my feelings,” said an ecstatic Sidorova, 23, who skipped this team to the European women’s championship earlier this season. “I probably still can’t believe that happened with us. But I was sure, and now I’m pretty sure, that we are able to play at a really high level and be able to beat everybody. We just need to execute well and just believe in ourselves. Sometimes we missed a lot, so now I guess we haven’t.” It was a game of momentum swings. The Russians had it early, stealing points in the first and third ends, and scoring one in the sixth to take a 3-1 lead. But the Koreans, who also lost the bronze-medal game two years ago in Switzerland, bounced back with a seventh-end deuce and held Russia to one in the eighth. In the ninth, a sloppy end from the Russians opened the door for a draw to the four-foot to score three by Gim. The 10th, though, swung things back to the Russians. Gim just missed on a steep double-takeout that would have won the game, and Sidorova made the draw for two to force the extra end. And in the 11th, the Russians were able to get two counters in the four-foot area to force Gim make her last shot. It missed, barely, to set off a wild celebration by the Russians. “Especially in the second half of the game it was a couple of big mistakes from my side, especially,” said Sidorova with a smile. “So I will probably punish myself somewhere there. But it worked and the main goal for us was just to be with two stones shot in the extra end and we did and it worked.” The South Koreans will take plenty of positives out of the 2014 Ford World Women’s, especially as the country builds toward hosting the 2018 Winter Olympics in Pyeongchang — the same region that played host to the 2009 women’s worlds. 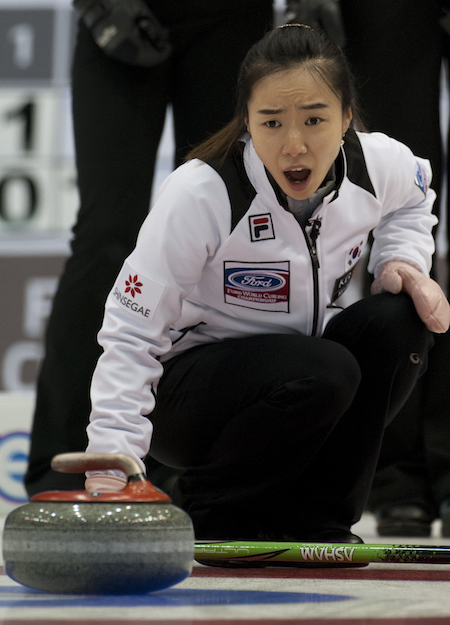 “We gave chances to Team Russia and Team Russia played very well,” said a disappointed Kim. “This week’s competition was just enjoyed. It was very good, but maybe this game we had chances but maybe our team is very young. Maybe we were nervous. We need more practice and more enjoyment. With more experience we’ll get better and better until we play very well.” Sidorova’s team was a fan favourite at the Sochi Olympics, but didn’t meet the country’s, and its own, expectations by missing the playoffs. So Sunday’s bronze medal, said Sidorova, will play to rave reviews back home. “That means a lot for us,” she said. “I know that millions of people were watching our games during the Olympics and I knew that they all tried to cheer us up and to make everything good and was possible so that we could believe in ourself. But it didn’t work at the Olympics and we felt really disappointed after that. (The 2014 Ford Worlds) was one more opportunity for us to have this confidence in ourself and also to prove to us and to other people that we are ready and we are really a team that is able to win.” The gold-medal game between Canada’s Rachel Homan and Switzerland’s Binia Feltscher is scheduled for 7:30 p.m. ADT on TSN and RDS, the official broadcast partners of the Season of Champions. Live scoring is available at: https://www.curling.ca/scoreboard/?e=58 The French version of this story will be available at https://www.curling.ca/2014worldwomen-fr/ as soon as possible. Follow @ccacurling on Twitter (#FWWCC) for updates during the 2014 Ford Worlds.