Crowded at the top of the standings in Yellowknife

It’s getting crowded at the top of the leaderboard after ten draws at the 2014 Canadian Senior Curling Championships in Yellowknife, N.W.T. as teams with only one loss jockey for position. On the men’s side, Alan O’Leary of Nova Scotia bounced back from his first loss of the round robin earlier in the day – a lopsided 10-4 loss to Alberta’s Mark Johnson – to score an 8-6 extra-end win over Ontario’s Peter Mellor to stay on top with a 6-1 record.

In other Draw 10 action, Prince Edward Island’s Ted MacFadyen scored three in the ninth on a quiet tap-back, then ran Quebec’s Denis Laflamme out of rocks for a 7-4 win, P.E.I.’s first in the round robin. Yukon’s George Hilderman gave up three stolen points in a 10-6 loss to Saskatchewan’s Darrell McKee. Two stolen points were the difference in the game between Northwest Territories’ Glen Hudy and New Brunswick’s Mark Armstrong. Despite stealing one in the ninth to trail 9-7, Hudy couldn’t generate any more points in the 10th and took his sixth loss. On the women’s side, Saskatchewan’s Lorraine Arguin moved to 6-1 in the standings, stealing a single in the last end to squeak by  Newfoundland and Labrador’s Cathy Cunningham 7-6. Arguin now sits alone in first place, followed closely by Ontario’s Marilyn Bodogh and Manitoba’s Lois Fowler, both with 5-1 records. In Draw 10, Bodogh scored a five-ender in the ninth on the way to a 12-4 victory over Quebec’s Catherine Derick. In other games, Heidi Hanlon of New Brunswick defeated Ann McKellar-Gillis of Northwest Territories 10-5, and Nova Scotia’s Colleen Pinkney stole two in the final end for a 9-6 win over Jennifer Scott of Prince Edward Island. The winners of the 2014 Canadian Seniors will represent Canada at the 2015 World Senior Curling Championships, at a site and date to be announced by the World Curling Federation. Last year’s Canadian champions, skipped by Colleen Pinkney of Truro, N.S., and Wayne Tallon of Fredericton, N.B., are competing in this year’s World Seniors, April 23-30 at Dumfries, Scotland. Since the World Seniors began in 2002, Canada has won eight men’s and nine women’s titles. Draw results for the 2014 Canadian Seniors will be instantly available at www.curling.ca. For information about the event, including team rosters and event schedules, visit www.curling.ca/2014seniors-en. 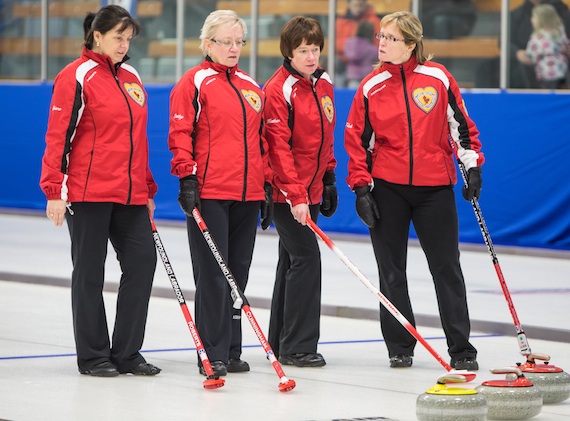