Teams keeping an eye on the leaders at Senior Championships

Nova Scotia’s Alan O’Leary (7-1) may be leading the pack in the men’s draw at the Canadian Senior Curling Championships, but three teams – Northern Ontario, Alberta and Manitoba – all won games on Wednesday afternoon to keep it close. Northern Ontario’s Robbie Gordon started and ended big against New Brunswick’s Mark Armstrong. Gordon scored three in the first end, then blew it open in the ninth with four points to take an insurmountable 10-4 lead and the win.

Mark Johnson and his team from the Grande Prairie Curling Centre led PEI’s Ted MacFadyen 5-1 at the fifth-end break after stealing two ends. Johnson scored three in the seventh to put the game away, 8-2. PEI and New Brunswick trail the pack with 2-7 records. Denis Laflamme and his Quebec team from the Club de curling Sept-Îles traded ends with Manitoba’s Kelly Robertson but just couldn’t get the lead, losing 8-6. Quebec now sits 3-6 in the lower half of the standings. In the only other men’s game of the afternoon, Yukon’s George Hilderman gave up a steal of one to British Columbia’s Wes Craig in a 10-9 B.C. win. Craig now has a 5-3 record, tied with Ontario’s Peter Mellor and still in touch with the leaders as playoffs approach. On the women’s side, leader Lorraine Arguin (7-1) had a bye, giving the other teams an opportunity to make up ground. Manitoba’s Lois Fowler took advantage, improving to 7-1 and claiming a share of first place after defeating Quebec’s Catherine Derick 10-9 in a see-saw affair that went to an extra end. Marilyn Bodogh and her team from the St. Catharines Curling Club had trouble generating offence against Alberta’s Glenys Bakker. Alberta scored threes in both the fifth and eighth ends to build the lead. A single in nine wasn’t enough for Ontario to catch up, and the game ended with a 7-4 Alberta victory. The loss leaves Ontario with a 6-3 record, tied with New Brunswick’s Heidi Hanlon, who lost to Northern Ontario’s Vicky Barrett, 9-6. And in the other women’s game, British Columbia’s Penny Shantz overcame a slow start – she wasn’t able to score for the first four ends – to post a 6-4 victory over Newfoundland and Labrador’s Cathy Cunningham. With four draws left in the women’s draw, Saskatchewan (7-1), Manitoba (7-1), Ontario (6-3) and New Brunswick (6-3) top the standings. On the men’s side, the leaders are PEI (7-1), followed by Northern Ontario, Alberta and Manitoba, all with 6-2 records. 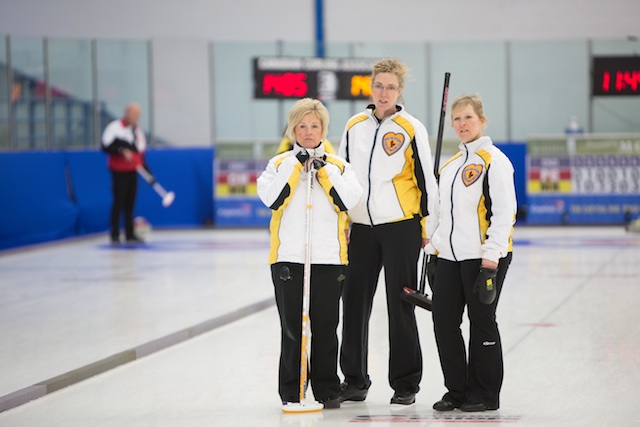 The winners of the 2014 Canadian Seniors will represent Canada at the 2015 World Senior Curling Championships, at a site and date to be announced by the World Curling Federation. Last year’s Canadian champions, skipped by Colleen Pinkney of Truro, N.S., and Wayne Tallon of Fredericton, N.B., are competing in this year’s World Seniors, April 23-30 at Dumfries, Scotland. Since the World Seniors began in 2002, Canada has won eight men’s and nine women’s titles. Draw results for the 2014 Canadian Seniors will be instantly available at www.curling.ca. For information about the event, including team rosters and event schedules, visit www.curling.ca/2014seniors-en.