Curling with Pride: Looking back and moving forward

One evening in October 1997, eight like-minded curling enthusiasts gathered to create Edmonton’s first and only gay curling league. From that first night to today, Curling with Pride’s mission statement has always been to promote fellowship through curling, based on fair play and mutual respect, for Edmonton’s GLBT community, its friends, its families and its allies. In the beginning, however, the league struggled to find teams. At its smallest, Curling with Pride had only four teams that played three-on-three games. Changing clubs, changing nights, changing draw times and facing discrimination made it difficult to grow in size. While that first group of curlers may have been small in number, they took a lot on while attempting to increase membership. They made a curling float for the Edmonton Pride Parade, handed out flyers along the route, manned tables at different Pride and GLBT parties and dances and even formed partnerships to host events with Womonspace, the Leather group, Gay and Lesbian Community Centre of Edmonton (GLCCE) and the Pride Centre. 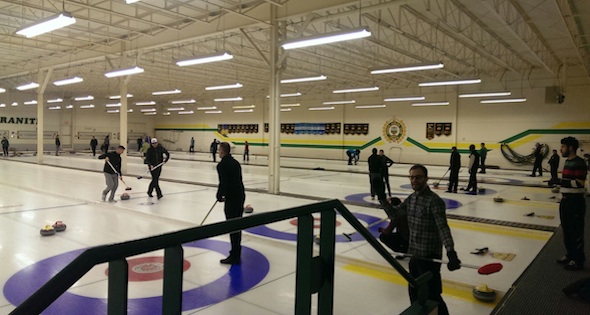 Over the last four years, the club has enjoyed a growth spurt. In 2012, Curling with Pride was officially incorporated as a not-for-profit organization under Alberta’s Society’s Act, and in 2013 secured a $10,000 traveling grant to attend the 2013 Canadian Gay Curling Championships in Halifax, Nova Scotia. Currently, the group has grown to include 18 teams and another 10 curlers on the spares list. Ice time is getting cramped, so it looks as if expansion is on the horizon. And more good news – this season, the national championship returns to Edmonton, hosted at the Granite club, home to Curling with Pride for the past 10 years, and supported by a $20,000 grant from the Alberta government. In 2003, following the Western Cup hosted by Edmonton’s sister league in Calgary, talk among some of the leagues represented there started discussing the formation of a Canadian Gay Curling League. After thousands of emails, Edmonton’s Curling with Pride hosted the first Canadian Gay Curling Championships in November 2005. Four members of that first organizing committee will be participating in this year’s bonspiels as well. “Helping to organize the 2014 CGCCs has been a tremendous experience,” says Keith K, the 2014 CGCC Organizing Committee Treasurer. “I’ve gotten to see a different side to people than you see on the ice and have been impressed with the academic and professional accomplishments of many of the committee members. People really have brought their ‘A game’ to make the 2014 CGCCs an awesome experience for all the participants. We’re helping to build a legacy of GLBTQ curling in Canada.” “Being able to work so closely with a great group of people to help bring together such an amazing event has been phenomenal,” says Colin Rechlo, the 2014 CGCC Bonspiel Coordinator and treasurer for Curling with Pride. “It shows what a lot of hard work and determination of like-minded people can accomplish. I am proud to be a part of something that will go down in our history books as a great event in Edmonton.”

The Curling with Pride league includes 18 teams, with another 10 curlers on the spares list (Photo courtesy J. Fox)

For James Fox, the club’s current president, the growth and success of Curling with Pride and the opportunity to be involved in the planning for the 2014 Canadian Gay Curling Championships over the past two years has been an amazing experience. “Hearing that first note from the bagpipes during the opening ceremonies, I’ll know that all our hard work and determination will have paid off,” he says. “I’ll have fond memories of my experience on the Organizing Committee for a long time after the last curler has flown home.” (Story by James Fox, Edmonton) Teams from Edmonton, Vancouver, Calgary, Winnipeg, Toronto, Ottawa, Montreal and Halifax will compete at the Canadian Gay Curling Championship, hosted by Curling with Pride, at the Granite Club in Edmonton from April 3-6, 2014.