Manitoba, skipped by Lois Fowler of Brandon, and Nova Scotia, directed by Alan O’Leary of Halifax, won their respective Canadian Senior Curling Championship titles Saturday at Yellowknife, N.W.T. Manitoba defeated Saskatchewan (Lorraine Arguin of Moose Jaw), 5-1 while Nova Scotia edged Manitoba (Kelly Robertson of Neepawa), 9-8. For O’Leary, it was the first win in Canadian senior men’s history for his province since the championship began in 1965, while Fowler was notching just a second title since 1973 for Manitoba, following Mabel Mitchell’s win in 1983. 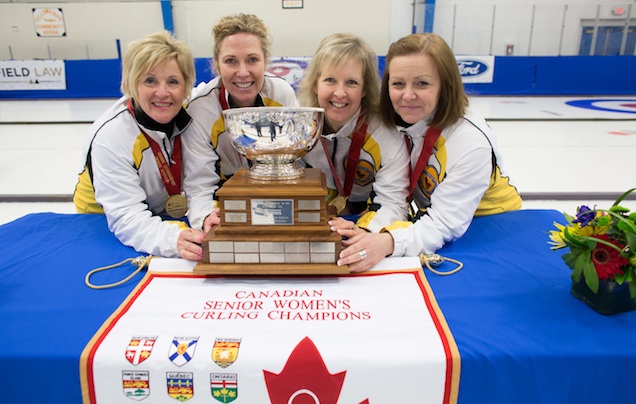 The women’s final was a defensive battle from the outset, with the first three ends blanked before Fowler took one in the fourth to finally break the ice. Arguin then blanked the fifth and sixth ends before settling for one in the seventh to tie the game. However, Fowler broke it open in the eighth end, counting three for a commanding 4-1 lead, then stole one in the ninth to seal the deal, running Saskatchewan out of rocks in the 10th end for a 5-1 final. Fowler and her team of Maureen Bonar, Cathy Gauthier and Allyson Stewart had finished the round robin tied for first place with Saskatchewan, both with sparkling 10-1 records, but had advanced directly to the final by virtue of their 8-6 round robin win. Fowler, who twice had finished third at the Canadian Seniors in 2009 and 2013, is also a veteran Scotties Tournament of Hearts competitor, and was runner-up to Sandra Schmirler in 1993, when playing third for Bonar, losing an extra end final at home. “It feels incredible,” said Fowler. “Maureen and I lost the Canadian final in 1993 against Sandra Schmirler and today we were up against another tough Saskatchewan team. It’s totally a dream come true, let me tell you. We are just elated. We knew we had a good team (coming into the event). “I called Maureen and asked if she was interested in playing Seniors. We’d had a lot of success together. Cathy and Ally are good friends. And it just all worked out. “It was a good game. She (Arguin) didn’t go after us and we didn’t go after her for the first few ends. But then I made a runback double in the eighth end to get our three. I’m just in a cloud right now, on top of the world.” Arguin, along with teammates DondaLee Deis, Shelly Urquhart and Connie Fritzler representing the Moose Jaw Ford Curling Centre, had advanced to the final after beating Ontario’s two-time women’s world champion, Marilyn Bodogh, 7-4 in Friday’s semifinal. The men’s final was a complete contrast to the women’s, as both teams duked it out from the start, trading deuces in the first two ends, before O’Leary was able to count one in the third, then steal a single in the fourth to go up 4-2. Robertson, the 2011 Canadian Seniors champion and 2012 World Seniors silver medallist, responded with a deuce in the fifth end to knot the affair at four before O’Leary returned the favour, taking his own pair in the sixth for a 6-4 lead. However, Robertson countered with a huge three in the seventh for a 7-6 advantage, his first lead of the game. O’Leary, who skipped Nova Scotia in the 1993 and 1994 Briers and had also finished fifth last year in the Canadian Seniors at Summerside, P.E.I., was only able to muster a single in the eighth end to tie the game at seven. Manitoba, though, was forced to one in the ninth end to take an 8-7 lead, before Nova Scotia counted two in the 10th end to claim its first Canadian Senior men’s title.

O’Leary, along with teammates Andrew Dauphinee, Danny Christianson and Harold McCarthy of the Halifax Mayflower Curling Club, and Manitoba had completed the round robin with 9-2 marks. But the ‘Bluenosers’ were accorded first place and a bye to the final for their 9-7 round robin win. Manitoba’s Robertson then won the semifinal Friday over Northern Ontario’s Robbie Gordon, 10-8 to advance to Saturday’s final. “I had to draw the four-foot to win,” said O’Leary, about the 10th end heroics. “Part of our success, I think, came last year when we got to see (Nova Scotia’s) Colleen Pinkney win for the women. That was exciting. “We went right at it. You don’t get to too many of these (finals). We knew we couldn’t run or hide from Manitoba. They were playing aggressive as well. We had to play our best. They were a great team. It was a lot of fun to play in the final. I screwed up a few times during the game, but the boys came through in the 10th for me and we pulled it out. “Oh, my God, I’m getting choked up just thinking about it (representing Canada next year at the World Seniors),” continued O’Leary. “The camaraderie amongst all the players, men and women, is great. Another banner to hang in the Mayflower, I guess.” It was the first time that the City of Yellowknife and the Northwest Territories had hosted a Canadian curling championship. As the winners, the Fowler and O’Leary teams will represent Canada at next year’s World Seniors, at a site and date still to be announced by the World Curling Federation. Last year’s Canadian Seniors champions, Colleen Pinkney of Truro, N.S. and Wayne Tallon of Fredericton, N.B., will wear Canada’s colours in the 2014 World Seniors, April 23-30 in Dumfries, Scotland. Story by Jeff Timson