Team Canada off to winning start at World Men’s Championship

BEIJING — Even on the other side of the world, it remains an indisputable fact that when you give Kevin Koe’s curling team a lead, it rarely surrenders it. 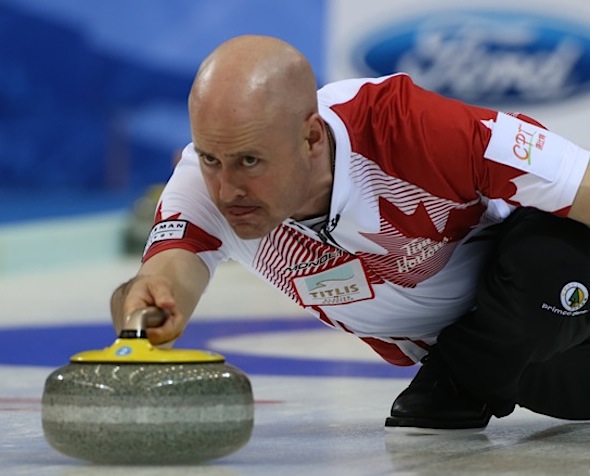 Denmark’s Rasmus Stjerne was served up a reminder on Saturday night at Capital Indoor Stadium. Koe’s Team Canada squad from Calgary — third Pat Simmons, second Carter Rycroft, lead Nolan Thiessen, alternate Jamie King, team coach John Dunn and national coach Rick Lang — methodically cruised to a 6-3 victory in the opening game for both teams at the 2014 World Men’s Curling Championship, presented by Ford of Canada. The win was not only an ideal opening to the 12-team round-robin tournament, it was a rare feat for the team this season. “We lost the first game at the (Canadian Curling) Trials, we lost our first game at the provincials and we lost our first game at the (Tim Hortons) Brier,” said Rycroft with a chuckle. “Coach Dunn said, ‘I don’t want that to happen again.’ Mission accomplished: 1-and-0.” As Rycroft noted, “it didn’t have to be pretty.” And early on, as both teams adjusted to ice conditions in an arena more noted for hosting the 2008 Olympic volleyball competition, it wasn’t. But Team Canada pounced on Danish misses in the third end to score two, then stole single points in the following two ends to take control. Canada’s airtight defence went to work the rest of the way, and never opened the door to a potential Danish comeback. “If you’re up, your shots are usually simpler, and with the ice being tricky, that’s a big advantage,” said Koe. “If you’re having to play come-arounds and freezes to get back into it, those aren’t easy to begin with, let alone when the ice is tricky, so if you can throw ’em hard, which we like to do, that’s always a good sign.” 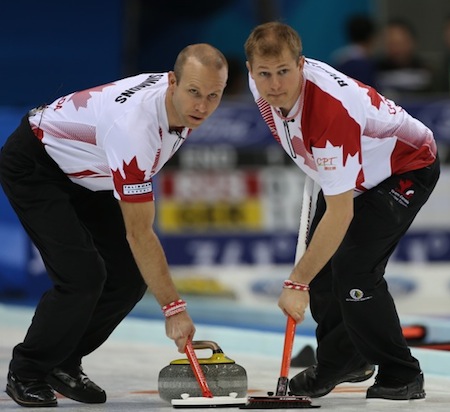 “That’s a tough team to come back on,” added Stjerne, who skipped the Danes to a fourth-place finish in the 2013 Ford Worlds in Victoria. “They never gave us an inch. I felt like we had a couple opportunities to get a deuce, but we never took advantage and it bit us in the end.” Canada returns to the ice on Sunday afternoon (2 a.m. Eastern) against Japan’s Yusuke Morozumi, a 9-5 loser to Norway’s Thomas Ulsrud on Saturday night. “You know what? (The Danes) are a good team, they made the playoffs last year, so they’re one of the better teams here,” said Koe, who was scored at 96 per cent for the night. “And we’ve got off to a slow start everywhere this year, so to get the win under our belt feels good.” In other Saturday night games, Oskar Eriksson of Sweden (2-0) topped Pete Fenson of the U.S. (0-2) 8-6, while Johnny Jahr of Germany, who was 0-9 at the Olympics, improved to 2-0 with a 9-5 win over Evgeny Arkhipov of Russia (1-1). Earlier Saturday, Russia shaded Switzerland’s Peter de Cruz 8-7, Jirí Snítil of the Czech Republic downed the U.S. 9-7, Germany thumped China’s Rui Liu 11-5 and Sweden doubled Scotland’s Ewan MacDonald 8-4. Here is the remainder of Team Canada’s round-robin schedule, including broadcast plans (all times Eastern): March 30 — vs. Japan (Yusuke Morozumi), 2 a.m. March 30 — vs. China (Rui Liu), 7 a.m. (live, TSN/RDS2) March 30 — vs. Russia (Andrey Drozdov), 9 p.m. March 31 — vs. Czech Republic (Jirí Snítil), 7 a.m. (live, TSN/RDS2) April 1 — vs. U.S.A. (Pete Fenson), 2 a.m. April 1 — vs. Norway (Thomas Ulsrud), 7 a.m. (live, TSN/RDS2) April 1 — vs. Switzerland (Peter de Cruz), 9 p.m. April 2 — vs. Sweden (Oskar Eriksson), 7 a.m. (live, TSN/RDS2) April 3 — vs. Germany (Johnny Jahr), 9 p.m. April 3 — vs. Scotland (Ewan MacDonald), 2 a.m. (live TSN/ tape delay, 7 a.m. RDS2) For Team Canada updates, go to www.curling.ca. Follow us on Twitter, @CCAcurling. For live scoring, standings and team lineups from the 2014 World Men’s Curling Championship, go to: wmcc2014.curlingevents.com/ The French version of this story will be posted as soon as possible at www.curling.ca/fr