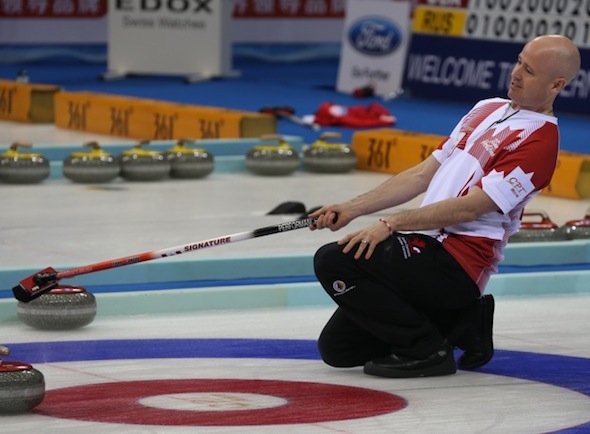 For the second straight year, Morozumi’s Japanese squad from Karuizawa pulled off a major upset of Team Canada, turning back Calgary’s Kevin Koe 9-6 on Sunday afternoon in the 2014 World Men’s Curling Championship, presented by Ford of Canada, at Capital Indoor Stadium. A year ago, Morozumi took down Canada’s Brad Jacobs 10-8 at the Ford Worlds in Victoria. On Sunday, Japan came back from a 5-2 deficit through five ends to beat a Canadian team that struggled all day to get a handle on the ice. “This is our second time to beat Canada, and to beat Canada is always exciting for us. We have to continue to play like that,” said Japanese lead Kosuke Morozumi, the younger brother of the skip. “They’re a good team, but I think it was a little bit lower than their best performance.” The Canadian team— Koe is backed up by third Pat Simmons, second Carter Rycroft, lead Nolan Thiessen, alternate Jamie King, team coach John Dunn and national coach Rick Lang — wouldn’t disagree with that assessment. “Just everything,” said Koe. “Weight, patchy ice, and I struggled with draw weight. It’s tough out there, and if you’re not throwing them great, it’s even harder. And the Japanese team played great.” After stealing two in the fifth end to take a 5-2 lead, Canada gave away the lead in the sixth when Japan scored three after Koe jammed on a double-takeout attempt. Two rollouts on Koe takeouts in the seventh gave the Japanese a steal of one and their first lead, and they were in position to steal in the eighth before Koe made a bailout 10-foot raise-tap into the four-foot to score one and avoid a steal of possibly four. 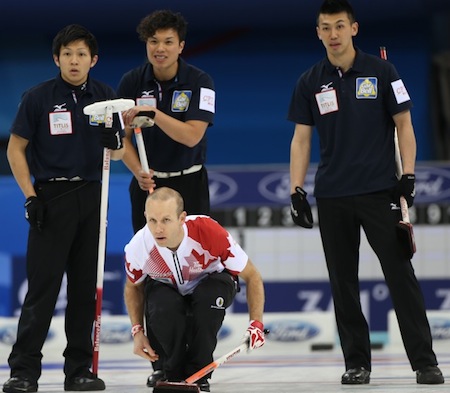 Japan took one in the ninth, and stole two in 10 when Koe’s last-rock angle-raise double-takeout attempt barely overcurled. “We’re struggling to find it right now,” said Thiessen. “That’s fine. It’s a long week. We gave one away and we normally don’t, but we don’t normally go through these things unbeaten. We’ll just keep fighting for our lives.” Canada, 1-1 after the loss, is back on the ice later Sunday (7 a.m. Eastern, TSN/RDS2) against China’s Rui Liu (1-1). “No secrets,” said Koe. “We just have to come out and pick up the ice better.” In other games on Sunday afternoon, Germany’s Johnny Jahr continued his strong early play, improving to a leading 3-0 with a 7-5 win over Sweden’s Oskar Eriksson (2-1). It’s a marked turnaround for this German team, which went 0-9 at the Olympics last month in Sochi. “We had a very bad Olympic Games,” conceded German vice-skip Felix Schulze. “We’ve come here and re-focused, and we have enough power to compete well. I think we have to keep on fighting; it’s only the beginning of the week.” Also, Norway’s Thomas Ulsrud (2-0) beat Denmark’s Rasmus Stjerne (0-2) 8-3, and Pete Fenson of the U.S. (1-2) knocked off Russia’s Evgeny Arkhipov (1-2) 6-5 in an extra end. In the morning draw, China turned back Scotland’s Ewan MacDonald (0-2) 11-8, while Switzerland’s Peter de Cruz (1-1) was a 9-4 winner over the Czech Republic’s Jirí Snítil (1-1). Here is the remainder of Team Canada’s round-robin schedule, including broadcast plans (all times Eastern): March 30 — vs. China (Rui Liu), 7 a.m. (live, TSN/RDS2) March 30 — vs. Russia (Andrey Drozdov), 9 p.m. March 31 — vs. Czech Republic (Jirí Snítil), 7 a.m. (live, TSN/RDS2) April 1 — vs. U.S.A. (Pete Fenson), 2 a.m. April 1 — vs. Norway (Thomas Ulsrud), 7 a.m. (live, TSN/RDS2) April 1 — vs. Switzerland (Peter de Cruz), 9 p.m. April 2 — vs. Sweden (Oskar Eriksson), 7 a.m. (live, TSN/RDS2) April 3 — vs. Germany (Johnny Jahr), 9 p.m. April 3 — vs. Scotland (Ewan MacDonald), 2 a.m. (live TSN/ tape delay, 7 a.m. RDS2) For Team Canada updates, go to www.curling.ca. Follow us on Twitter, @CCAcurling. For live scoring, standings and team lineups from the 2014 World Men’s Curling Championship, go to: wmcc2014.curlingevents.com/ The French version of this story will be posted as soon as possible at www.curling.ca/fr