BEIJING — The struggles of the opening weekend were left firmly in the past by Team Canada on Monday morning at the World Men’s Curling Championship, presented by Ford of Canada. 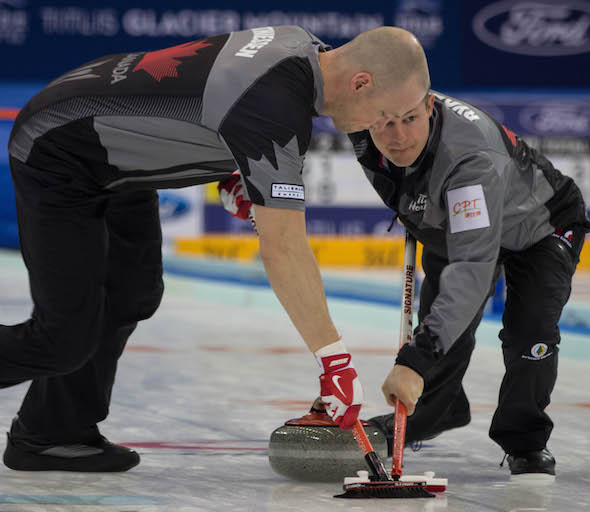 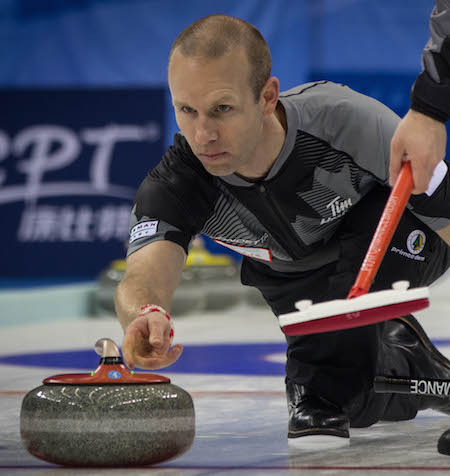 “We played better and the ice was better,” said Koe afterward. “We had a bit more confidence out there, and we played pretty good. We didn’t have to talk so much about weight. Yesterday, honestly, spots were 10 to 15 feet different from each other. Today, it was a couple feet max, and that makes it a lot easier on the brains.” The Canadians were scored at 96 per cent collectively, with Thiessen and Rycroft both being credited with perfect 100 per cent games. It was a marked contrast to the first three games, during which Canada struggled to catch onto the ice conditions in an arena that had hosted only one previous curling event and presented numerous challenges to the icemaking crew, headed by Canadians Hans Wuthrich and Greg Ewasko. “That felt way better,” nodded Rycroft. “We threw some stinkers yesterday, and we were lucky to get away with 1-1 (losing to Japan, beating China). Finally, today, we felt like we got a bit of a handle on things. We were throwing ’em properly. Still missing a few, but at least we’re throwing then with conviction. The results? You can’t worry about them too much because you still get caught on certain spots.” The Russians weren’t able to use the last-rock advantage they’d earned from the pre-game draw until the sixth end. Canada stole single points in each of the first four ends, keeping the pressure on Russian last-rock thrower Alexey Stukalskiy. He finally managed to deliver a point in the sixth, but even that was a missed opportunity as it was a hit attempt for a potential deuce. The game was put away in the seventh as the Russians’ attempt to generate a steal went disastrously south, and Koe was able to score five to prompt handshakes. “We’re happy to be 3-and-1,” said Koe. “Obviously, we would have liked to have that one back yesterday (loss to Japan) when we were up three. But that’s going to happen every once in a while. Three and one?  That’s not a bad spot.” 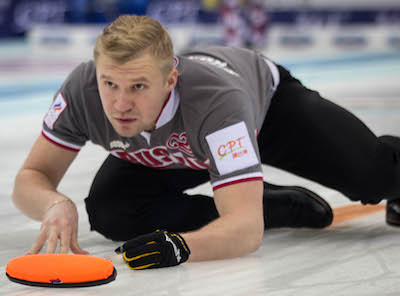 In other Monday morning games, the Germans took their first loss of the event, bowing 9-4 to Denmark’s Rasmus Stjerne, who entered the game winless at 0-3. “It’s been a rough start,” admitted Sterne, who authored four-enders in the second and fourth ends against Germany. “We knew we needed to show ourselves that we’re still decent curlers and give ourselves a chance. I think in previous games we were trying not to lose and this time we went for the win.” Also, Japan’s Yusuke Morozumi (3-1) picked up a 9-5 win over Pete Fenson of the U.S. (1-3), and Norway was a 6-3 winner over Sweden’s Oskar Eriksson (2-2). The Canadians return to the ice later on Monday, taking on Jíri Snítil of the Czech Republic (1-2) at 7 a.m. Eastern (TSN/RDS2). Switzerland’s Peter de Cruz (2-1), China’s Rui Liu (1-2), the Czechs and Scotland’s Ewan MacDonald (0-3) had byes in the morning draw. Here is the remainder of Team Canada’s round-robin schedule, including broadcast plans (all times Eastern): March 30 — vs. Russia (Evgeny Arkhipov), 9 p.m. March 31 — vs. Czech Republic (Jirí Snítil), 7 a.m. (live, TSN/RDS2) April 1 — vs. U.S.A. (Pete Fenson), 2 a.m. April 1 — vs. Norway (Thomas Ulsrud), 7 a.m. (live, TSN/RDS2) April 1 — vs. Switzerland (Peter de Cruz), 9 p.m. April 2 — vs. Sweden (Oskar Eriksson), 7 a.m. (live, TSN/RDS2) April 3 — vs. Germany (Johnny Jahr), 9 p.m. April 3 — vs. Scotland (Ewan MacDonald), 2 a.m. (live TSN/ tape delay, 7 a.m. RDS2) For Team Canada updates, go to www.curling.ca. Follow us on Twitter, @CCAcurling. For live scoring, standings and team lineups from the 2014 World Men’s Curling Championship, go to: wmcc2014.curlingevents.com/ The French version of this story will be posted as soon as possible at www.curling.ca/fr