BEIJING — Team Canada came up a much-needed two-win Monday at the 2014 World Men’s Curling Championship, presented by Ford of Canada. 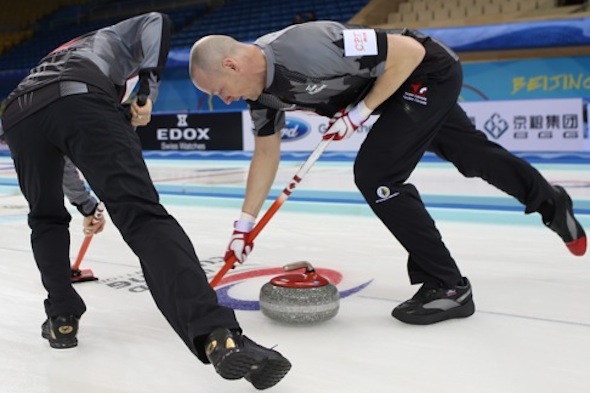 Kevin Koe’s Canadian champs from Calgary came back from a 6-3 deficit to beat the Czech Republic’s Jirí Snítil 10-6 in the late draw on Monday at Capital Indoor Stadium. With the victory, Team Canada — rounded out by third Pat Simmons, second Carter Rycroft, lead Nolan Thiessen, alternate Jamie King, coach John Dunn and national coach Rick Lang — improved to 4-1 in the 12-team round-robin standings, alone in second place behind Norway’s Thomas Ulsrud (5-0). Canada will take on Norway on Tuesday at 7 a.m. Eastern (TSN/RDS2). The victory over the Czechs bore no resemblance to Canada’s 9-1 thrashing of Russia’s Evgeny Arkhipov earlier on Monday. Snítil’s team, 1-3 entering the game, controlled the early ends and never gave the Canadians a sniff at building a multiple-point end. 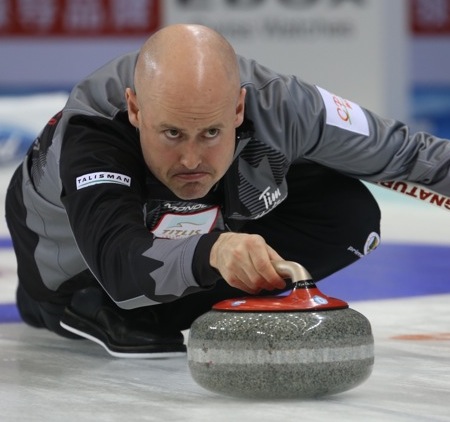 “For sure, you have to pull some games out,” said Koe. “We weren’t struggling as bad (as a day earlier in a loss to Japan); the sheet was a lot better than yesterday, but no excuses. The Czechs were playing really well and making some big shots. I was proud of the guys; we really stayed in there, tried to stay positive and keep it close.” The momentum started to shift after the fifth-end break. Canada scored a deuce in six to cut the Czech lead to 6-5, followed by a blank in the seventh, and a wonderful hit-and-roll from Koe in the eighth that led to a game-tying steal. The Canadians then followed up with arguably their finest end of the 2014 World men’s, making eight perfect shots in the ninth to be sitting four — guaranteed of a steal and forcing Snítil to attempt a wide outturn draw to bite the outside of the four-foot to cut the damage to one Canadian point. But the Czech rock caught debris just outside of the house and ground to an instant halt, giving the Canadians a steal of four and prompting handshakes. “That is a relief,” said Thiessen. “We were stealing one for sure there, so we were kind of getting control of the game back, but it would have been a battle coming home, for sure. You obviously don’t want to win like that, but any other country in the world would take a win against us like that, so we’ll take a win against somebody else. “You’re never going to win nine or 10 games in a round robin by just boat-racing teams, right? Definitely, to grind one out and still find a way to win is good for us. It keeps your confidence up, and hopefully we can keep it rolling. It’s a race to nine wins — once you’re there, you’re in the playoffs.” Even as the Czechs built their lead through five ends, Koe said his team never lost its ability to keep its collective head in the game. “We’ve talked with our coaches about it off the ice — if we’re going to lose, let’s at least keep battling and stay positive,” he said. “We did that very well in that game. It’s easy to get frustrated after the first few ends, but we hung in there and I’m really proud of the guys for battling that hard.” 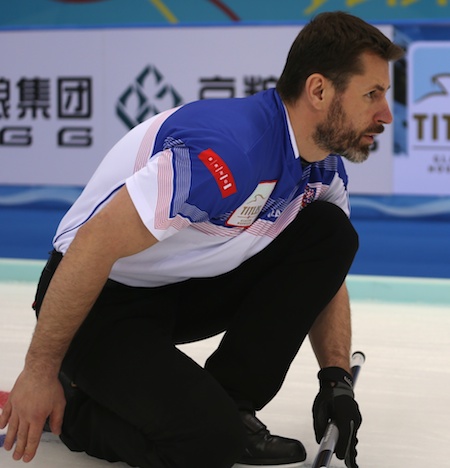 The Canadians have the early draw off on Tuesday, and will be on the ice at 2 a.m. (all times Eastern) against Pete Fenson of the United States (2-3), followed by the 7 a.m. showdown against Norway. The Norwegians improved to 5-0 by beating China’s Rui Liu 5-3, dropping the Chinese to 2-3. “It was fun. The boys are playing well so I can’t really complain right now, we are really enjoying ourselves,” said the always cheerful Ulsrud. “We have practised so hard this season with it being Olympic season. I wish it was (during the Olympics) but I’ll take it now. We definitely have a point to prove here, for ourselves and for the guys who support us back home, so fingers crossed throughout the week.” In other games Monday night, Denmark’s Rasmus Stjerne (2-3) shaded Scotland’s Ewan MacDonald (1-4) 7-6, and Switzerland’s Peter de Cruz (3-2) defeated Japan’s Yusuke Morozumi (3-2) 8-3. Germany’s Johnny Jahr (3-2), Sweden’s Oskar Eriksson (3-2), the U.S. and Russia’s Evgeny Arkhipov (1-4) all had byes in Monday night’s draw. March 30 — vs. Russia (Evgeny Arkhipov), 9 p.m. March 31 — vs. Czech Republic (Jirí Snítil), 7 a.m. (live, TSN/RDS2) April 1 — vs. U.S.A. (Pete Fenson), 2 a.m. April 1 — vs. Norway (Thomas Ulsrud), 7 a.m. (live, TSN/RDS2) April 1 — vs. Switzerland (Peter de Cruz), 9 p.m. April 2 — vs. Sweden (Oskar Eriksson), 7 a.m. (live, TSN/RDS2) April 3 — vs. Germany (Johnny Jahr), 9 p.m. April 3 — vs. Scotland (Ewan MacDonald), 2 a.m. (live TSN/ tape delay, 7 a.m. RDS2) For Team Canada updates, go to www.curling.ca. Follow us on Twitter, @CCAcurling. For live scoring, standings and team lineups from the 2014 World Men’s Curling Championship, go to: wmcc2014.curlingevents.com/ The French version of this story will be posted as soon as possible at www.curling.ca/fr