BEIJING — Team Canada has hit the midway point at the 2014 World Men’s Curling Championship, presented by Ford of Canada, feeling awfully good about the road ahead. 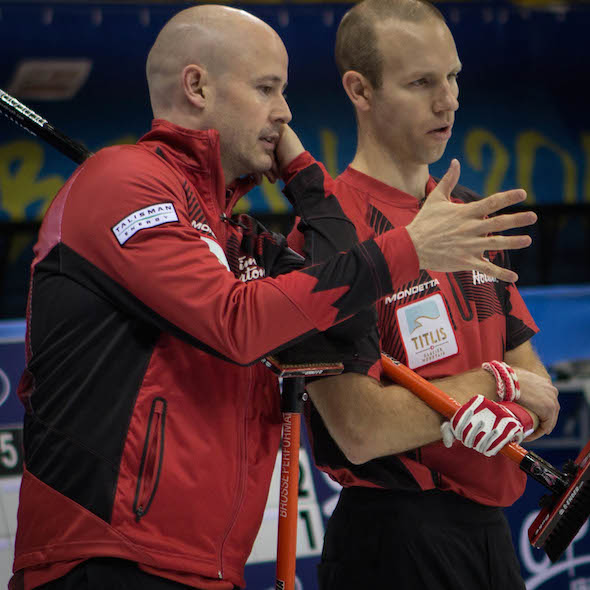 Kevin Koe’s Tim Hortons Brier champs from the Glencoe Club in Calgary won their fourth straight game on Tuesday afternoon at Capital Gymnasium, cruising to a 7-4 win over Pete Fenson of the United States. With the win, their fourth in succession, Koe, third Pat Simmons, second Carter Rycroft, lead Nolan Thiessen, alternate Jamie King, coach John Dunn and national coach Rick Lang improved to 5-1 in the 12-team round-robin standings — tied for top spot with Norway’s Thomas Ulsrud. “The way we’ve played, 5-and-1, some people might think we’re cruising but it hasn’t been that way at all,” said Koe, who along with Rycroft and Thiessen won the 2010 World Championship in Cortina d’Ampezzo, Italy. “We’ve had to fight for all those wins, but we seem to be getting better. Hopefully the struggles early in the week are passed and we can keep playing well. “I think we can improve a fair bit, but we’re in a good spot.” There was nothing fancy about Tuesday’s victory — just cool, efficient shotmaking that produced deuces in the second and seventh ends, in addition to a stolen point in the fifth end that was the result of forcing Fenson, in his eighth World Championship, to attempt, and miss, a tough draw. 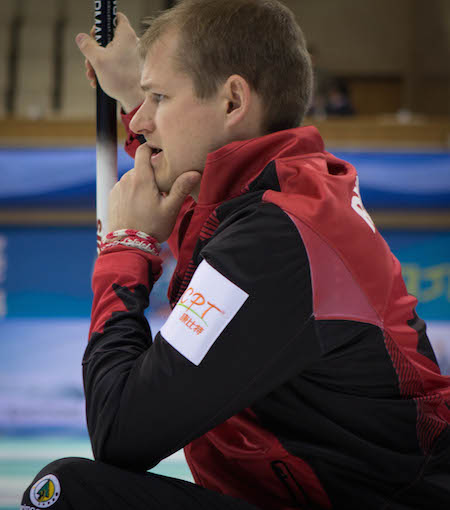 The seventh-end deuce came about when U.S. second Joe Polo jammed on a makeable double takeout, and Canada was able to make a series of draws to split the rings and now allow the U.S. to make the end-killing double takeout. “We were totally in a comfort zone,” said Rycroft. “It was the best team effort we’ve had, and the best handle we’ve had on the ice. We still found some runs, but we knew from past games what to expect.” The U.S. dropped to 2-5 with the loss, and needing a lot of help to snare one of the four available spots in the Page playoffs. “Everybody’s confidence is lacking right now,” admitted U.S. third Shawn Rojeski. “We’re just frustrated. We’re not used to shrugging our shoulders because we don’t know. It’s been a frustrating week to this point.” The win set the stage for a crucial showdown against Ulsrud’s Norwegians at 7 a.m. (all times Eastern) on TSN/RDS2, a game that could play a significant role in determining first place in the round robin. Norway suffered its first loss on Tuesday afternoon, falling 7-6 in an extra end to Germany’s Johnny Jahr (4-3). “In the past, we’ve tried to make (Ulsrud) throw hits — try to make him throw runbacks and sort of bring him out of his comfort zone,” said Rycroft. “Those taps, those freezes, those types of shots, he’s excellent at. So that’s our strategy against him.” In other Tuesday afternoon games, Sweden’s Oskar Eriksson (4-3) drilled Denmark’s Rasmus Stjerne (2-4) 9-4, while Japan’s Yusuke Morozumi (4-2) edged Russia’s Evgeny Arkhipov (1-6) 8-7; the four victories are already highest total in Japan’s history at the World Men’s Championship. “This means a lot,” said Japanese lead Kosuke Morozumi. “I want our juniors to be like us and be inspired by us.  (We will continue to inspire them) by winning more games.” Switzerland’s Peter de Cruz (4-2), China’s Rui Liu (3-3), Jirí Snítil of the Czech Republic (2-4) and Ewan MacDonald of Scotland (2-4) had byes in the afternoon draw. Here is the remainder of Team Canada’s round-robin schedule, including broadcast plans (all times Eastern): April 1 — vs. Norway (Thomas Ulsrud), 7 a.m. (live, TSN/RDS2) April 1 — vs. Switzerland (Peter de Cruz), 9 p.m. April 2 — vs. Sweden (Oskar Eriksson), 7 a.m. (live, TSN/RDS2) April 3 — vs. Germany (Johnny Jahr), 9 p.m. April 3 — vs. Scotland (Ewan MacDonald), 2 a.m. (live TSN/ tape delay, 7 a.m. RDS2) For Team Canada updates, go to www.curling.ca. Follow us on Twitter, @CCAcurling. For live scoring, standings and team lineups from the 2014 World Men’s Curling Championship, go to: wmcc2014.curlingevents.com/ The French version of this story will be posted as soon as possible at www.curling.ca/fr