Ferbey to be inducted into Word Curling Hall of Fame

One of the most accomplished curlers in the history of the sport will enter the World Curling Hall of Fame, it was announced today. 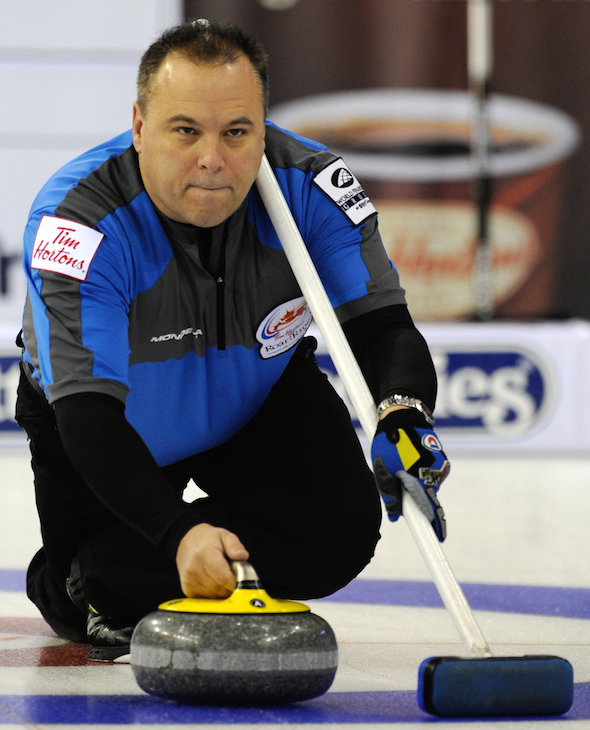 Randy Ferbey of Edmonton, a four-time world and six-time Brier champion, was named to the Hall of Fame along with Switzerland’s Patrick Hürlimann, the 1998 Olympic gold-medallist, and Norway’s Eigel Ramsfjell, a three-time world champion. Ferbey will be honoured during the 2015 Ford World Men’s Championship in Halifax. “This came out of nowhere for me; I’m blown away, to be honest,” said Ferbey, 54. “I’m really appreciative to the Canadian Curling Association for their support, as well as to the World Curling Federation. I never played the game to earn accolades like this. I always considered it a team game, and I really want to share this with all the great teammates I had over the years. I could not have done it without them.” Ferbey’s six Brier Canadian men’s championships — 1988 and 1989 as the third for Pat Ryan’s team, then 2001, 2002, 2003 and 2005 throwing third rocks and skipping the legendary Ferbey Four with teammates David Nedohin, Scott Pfeifer and Marcel Rocque — are a record, while he shares the record for most Brier wins as a skip (four) with Ernie Richardson and Kevin Martin. Ferbey also won world championships in 1989, 2002, 2003 and 2005. “Randy’s achievements on the ice over the years speak for themselves,” said CCA Chief Executive Officer Greg Stremlaw. “Equally important, Randy was always accessible to our great curling fans, and made a lot of friends for the sport with his outgoing nature. The Canadian Curling Association is thrilled to see him recognized with induction into the World Curling Hall of Fame.” It’s the third year the World Curling Federation has accepted nominations for induction into the Hall of Fame, which is described as “the highest ‘non-playing’ honour that the World Curling Federation can bestow on someone and recognizes outstanding contribution to the sport of curling whether through on ice exploits or off ice endeavours.” Last year, Canada’s Ron Northcott and Don Duguid were the inductees. Prior to 2012, the WCF awarded the World Curling Freytag Award, named after the late Elmer Freytag of the U.S. Curling Association, who was a founding member of the International Curling Federation (now the WCF). Previous Canadian Freytag honourees were: Ray Kingsmith (2011), Sandra Schmirler (2009), Shirley Morash (2001), Ernie Richardson (2000), Colin Campbell (1990), Bob Picken (1987), Don McLeod (1985), Mabel Deware (1983), Doug Maxwell (1981) and Ken Watson (1978). For more information on the World Curling Hall of Fame, go to: www.worldcurling.org/world-curling-hall-of-fame.