BEIJING — Team Canada has some work to do to nail down a top-two finish in the round robin at the 2014 World Men’s Curling Championship, presented by Ford of Canada. 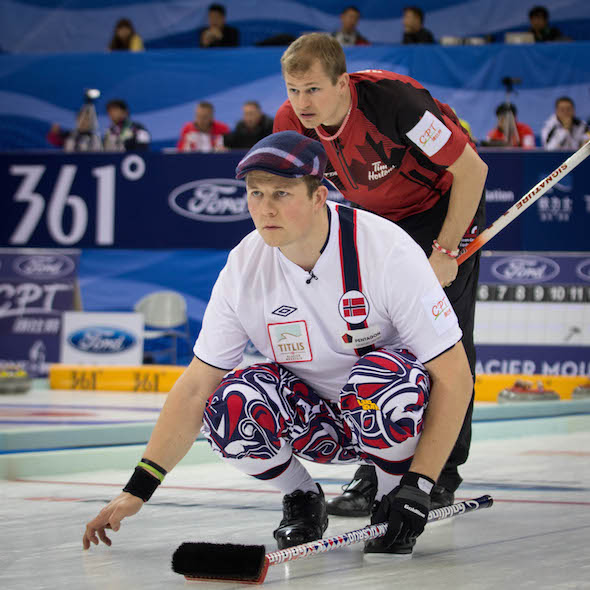 Kevin Koe’s Canadian team from Calgary had a chance to take over sole possession of first place in the 12-team round-robin standings on Tuesday night at Capital Gymnasium. Instead, a 9-5 loss to Norway’s Thomas Ulsrud landed Canada in a three-way tie for second place at 5-2 with Japan’s Yusuke Morozumi (who beat Canada on Sunday) and Switzerland’s Peter de Cruz, behind the 6-1 Norwegians. Team Canada has four round-robin games remaining in hopes of securing a top-two finish and a berth in the Page playoff 1-2 game, which gives participants two cracks at reaching Sunday’s gold-medal game. “We have to do our job, obviously,” said Team Canada third Pat Simmons. “We have four tough games and we’re going to have to play well. Obviously, the goal is still to be in the one-two game. We’ll see what happens, but we have a lot of work to do before we can think about that.” The Canadian team — rounded out by second Carter Rycroft, lead Nolan Thiessen, alternate Jamie King, team coach John Dunn and national coach Rick Lang — was in chase mode much of the evening against Norway. Ulsrud drew for three in the second, and then took a crushing stolen single in the third when Koe’s last-rock tap barely rubbed a guard after the sweepers had been briefly called off. “For sure, that was big,” nodded Koe. “Threw it good, but we missed a few line calls today, which was disappointing. We’re throwing it good, and the ice is really good. It sucks to lose any time, but I like the way we’re coming around, and if the ice keeps getting better, I think we’ll be fine.” The three-point lead would prove insurmountable. Canada drew to within a point but never pulled even — its best opportunity was in the seventh, but Koe’s last-rock draw attempt behind a centre guard caught some debris, and Ulsrud had an easier shot for a single. The win was put away in the ninth when Ulsrud made a double-takeout to score three. 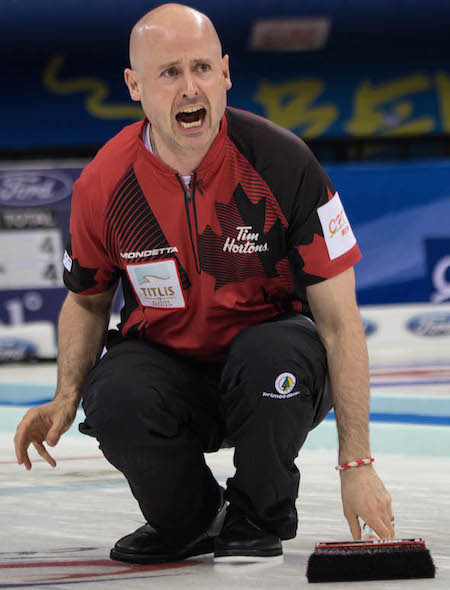 “We were a bit lucky there early in the game,” conceded Ulsrud on the third-end steal. “That was the game for Norway right there, we took a 410 lead. They are a strong team and fought their way back and it was tight all the way until the ninth end there.” Canada has a crucial game against the Swiss Wednesday morning (9 p.m. Tuesday night Eastern) before meeting Sweden’s Oskar Eriksson (4-3) on Wednesday night (7 a.m. Eastern, TSN/RDS2). “To be 5-and-2? I would have liked to be a little better, but the way we were playing earlier in the week, that’s not a bad spot because we were struggling,” said Koe. “We have some tough games coming up, but if we can keep throwing it well, I think we’ll get better results. Some of the missed shots weren’t the result of the throws; it was more the line calling. We just have to pick that up a little better.” In other Tuesday night games, Jíri Snítil of the Czech Republic (3-4) shaded Scotland’s Ewan MacDonald (2-5) 6-5; the Swiss knocked off China’s Rui Liu (3-4) 7-6; and Japan drilled Denmark’s Rasmus Stjerne (2-5) 8-2. Sweden, Germany’s Johnny Jahr (4-3), Pete Fenson of the U.S. (2-5) and Russia’s Evgeny Arkhipov (1-6) had byes in the evening draw. Here is the remainder of Team Canada’s round-robin schedule, including broadcast plans (all times Eastern): April 1 — vs. Switzerland (Peter de Cruz), 9 p.m. April 2 — vs. Sweden (Oskar Eriksson), 7 a.m. (live, TSN/RDS2) April 3 — vs. Germany (Johnny Jahr), 9 p.m. April 3 — vs. Scotland (Ewan MacDonald), 2 a.m. (live TSN/ tape delay, 7 a.m. RDS2) For Team Canada updates, go to www.curling.ca. Follow us on Twitter, @CCAcurling. For live scoring, standings and team lineups from the 2014 World Men’s Curling Championship, go to: wmcc2014.curlingevents.com/ The French version of this story will be posted as soon as possible at www.curling.ca/fr