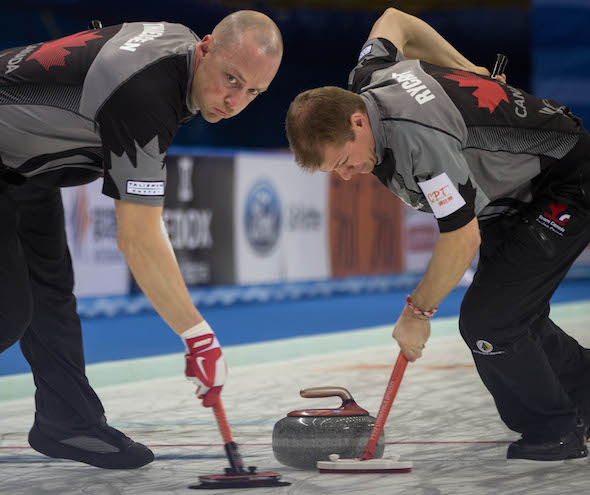 On Tuesday night, Kevin Koe’s Canadian team from Calgary admitted to some issues in reading the ice and sweeping calls during a loss to Norway’s Thomas Ulsrud. Wednesday morning at Capital Gymnasium, there were no such problems, and it paid off with a well-executed 8-4 win over Switzerland’s Peter de Cruz that provided a significant boost to Canada’s bid to play in the Page playoff 1-2 game. With the win, Team Canada — third Pat Simmons, second Carter Rycroft, lead Nolan Thiessen, alternate Jamie King, team coach John Dunn and national coach Rick Lang round out the team — improved to 6-2, tied for second place in the 12-team round-robin standings with Japan’s Yusuke Morozumi, behind only Norway at 7-1. 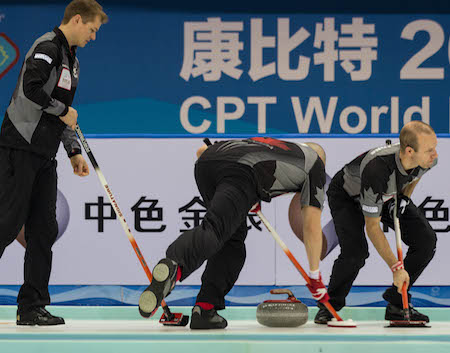 The Swiss, meanwhile, dropped to 5-3. “We talked about it last night, that we’re just calling the sweep a little late, and we picked it up better today,” said Koe, whose team is back on the ice in Beijing at 7 a.m. Eastern (TSN/RDS2) against Sweden’s Oskar Eriksson (4-3). “And it looked like they (Switzerland) weren’t quite trusting the amount of curl out there, and were missing the shots on the tight side.” The Canadians never trailed the Swiss; single points in the first two ends got the ball rolling, and the victory was put away with back-to-back deuces in the sixth and seventh ends. The sixth-end pair was the result of a masterful hack-weight in-off to get to the button through a maze of Swiss stones, arguably Koe’s finest shot of the Worlds to date. But he had company on Wednesday; Simmons had his best game of the event, shooting 88 per cent and executing a number of high-risk shots, including a wonderful runback double takeout in the fifth end when the Swiss were building a big end. “Pat played real well; that runback double was huge, and he made some big shots to bail us out,” said Thiessen. “That’s kind of our deal — if somebody misses, there’s a guy there to bail you out, and he did that today. “You know what? In eight years together I think we’ve only gone through a big event undefeated twice. We know what to do when our backs are to the wall, and we’re going to make everybody earn it.” 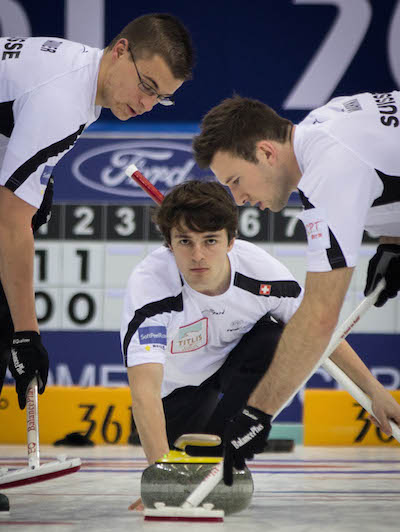 Coming back strongly against the Swiss helped erase any lingering disappointment from the loss to Norway, said Koe. “Obviously, playing Norway, you can lose any time you play them, and we had to come back against a really good Switzerland team,” he said. “That sets us up better — if you’re beating the teams that are tied with you, that can’t hurt. And overall, to play well and get a win is great. We have a huge game tonight; if we can win that, it really puts us in a good spot.” Norway was a 6-4 winner over Scotland’s Ewan MacDonald (2-6), while Japan held off Jirí Snítil of the Czech Republic (3-5) 7-5. In the other morning game, China’s Rui Liu (4-4) beat Denmark’s Rasmus Stjerne (2-6) 6-4. Sweden, Germany’s Johnny Jahr (4-3), Pete Fenson of the U.S. (2-5) and Russia’s Evgeny Arkhipov (1-6) had byes in the morning draw. Here is the remainder of Team Canada’s round-robin schedule, including broadcast plans (all times Eastern): April 2 — vs. Sweden (Oskar Eriksson), 7 a.m. (live, TSN/RDS2) April 3 — vs. Germany (Johnny Jahr), 9 p.m. April 3 — vs. Scotland (Ewan MacDonald), 2 a.m. (live TSN/ tape delay, 7 a.m. RDS2) For Team Canada updates, go to www.curling.ca. Follow us on Twitter, @CCAcurling. For live scoring, standings and team lineups from the 2014 World Men’s Curling Championship, go to: wmcc2014.curlingevents.com/ The French version of this story will be posted as soon as possible at www.curling.ca/fr