BEIJING — Team Canada has some work to do on the closing day of round-robin play at the 2014 World Men’s Curling Championship, presented by Ford of Canada. 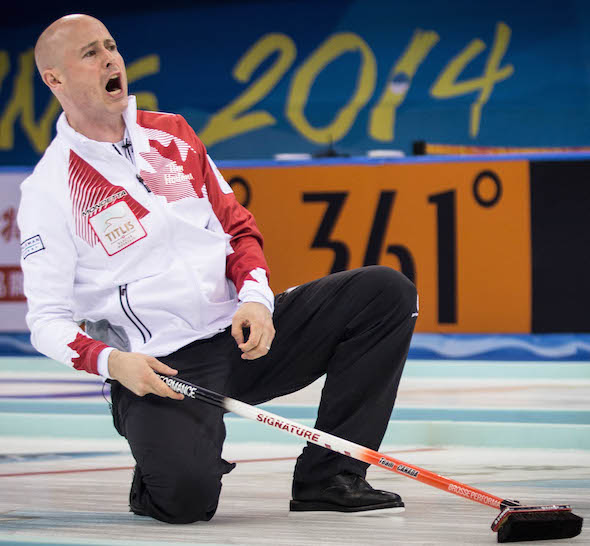 A 6-2 loss to Sweden’s Oskar Eriksson on Wednesday night at Capital Gymnasium left Kevin Koe’s Calgary team with a 6-3 record and needing some significant help on Thursday in order to nail down a spot in the Page playoff 1-2 game. Canada is tied with Switzerland’s Peter de Cruz for third place in the 12-team round-robin standings, behind Norway’s Thomas Ulsrud (8-1 and guaranteed of a playoff spot) and Japan’s Yusuke Morozumi (7-2). So, to get to the 1-2 game, Canada needs to win its final two round-robin games on Thursday — against Germany’s Johnny Jahr (4-5) at 9 p.m. Eastern on Wednesday night and against Scotland’s Ewan MacDonald (3-6) at 2 a.m. Eastern Thursday (live on TSN; tape delay on RDS2 at 7 a.m.), and needs Japan to lose its final two games, against Sweden (5-4) and China’s Rui Liu (5-4). “It’s disappointing; that was a big game for us and we couldn’t pull ’er out,” said Koe, who’s backed up by third Pat Simmons, second Carter Rycroft, lead Nolan Thiessen, alternate Jamie King, team coach John Dunn and national coach Rick Lang. “That’s a tough one. Just one of those games where we would build a big end and he’d come up with a good shot and I couldn’t answer. I had a few chances; I missed a triple for three (in the sixth end) and kind of miscalled the line again. Just one of those games — off by a couple inches.” 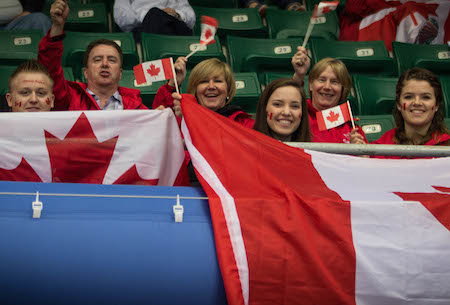 The Swedes scored nothing but singles, including steals in the second, fifth and sixth ends (the first thanks to a great double-takeout and roll; the latter on the Hail Mary triple attempt from Koe) en route to the victory, which kept their playoff hopes alive. “It easily could have been the reverse score, really,” said Rycroft. “We felt we outplayed them; we had rocks in play and in good positions and it seemed like every time we turned around at the end, they had one or two in there. It was a frustrating freaking game, but you can’t take anything away from them; Oskar made some great shots to bail them out.” “That win was huge,” noted Eriksson. “We lost to Switzerland this morning so we had to win this to stay in the race. Our goal is to get into the playoffs and finish off with a medal.” The Canadians, suffice to say, have similar ambitions, and have displayed shark-like attack tendencies when put in this position in the past. Koe, it should be noted, became the first skip to ever win the Tim Hortons Brier coming out of the Page 3-4 game back in 2010 — a triumph that was followed by a gold medal at the 2010 World Men’s Championship in Cortina d’Ampezzo, Italy. “Our backs are against the wall, and we just have to worry about making the playoffs,” said Koe. “I don’t know what all the scenarios are, but if we can get to 8-and-3, we know we’ll be in the playoffs. We’ve come through the long way in the playoffs a lot of times; just get us in there, give us a chance and we like our chances.” 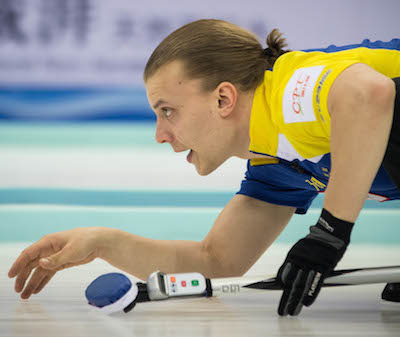 Norway nailed down its playoff spot with an 11-2 thrashing of Russia’s Evgeny Arkhipov (1-8), while the Japanese, whose previous best wins total at the World Men’s Championship was three, picked up a 10th-end deuce for an 8-7 win over Germany. In the other game, Pete Fenson of the U.S. (3-6) shaded Denmark’s Rasmus Stjerne (2-7) 6-5. Switzerland, China, Scotland and Jíri Snítil of the Czech Republic (4-5) had the byes in the evening draw. The winner of the Page 1-2 game (schedule TBD) will go straight to Sunday’s gold-medal game (3 a.m. Eastern, TSN; tape delay at noon, RDS2) while the loser will drop to Saturday’s semifinal (4 a.m. Eastern TSN; tape delay at 6:55 a.m., RDS2) against the winner of the Page 3-4 game (schedule TBD). Here is the remainder of Team Canada’s round-robin schedule, including broadcast plans (all times Eastern): April 2 — vs. Germany (Johnny Jahr), 9 p.m. April 3 — vs. Scotland (Ewan MacDonald), 2 a.m. (live TSN/ tape delay, 7 a.m. RDS2) For Team Canada updates, go to www.curling.ca. Follow us on Twitter, @CCAcurling. For live scoring, standings and team lineups from the 2014 World Men’s Curling Championship, go to: wmcc2014.curlingevents.com/ The French version of this story will be posted as soon as possible at www.curling.ca/fr