BEIJING — Team Canada is headed to the Page playoff 1-2 game at the 2014 World Men’s Curling Championship, presented by Ford of Canada. 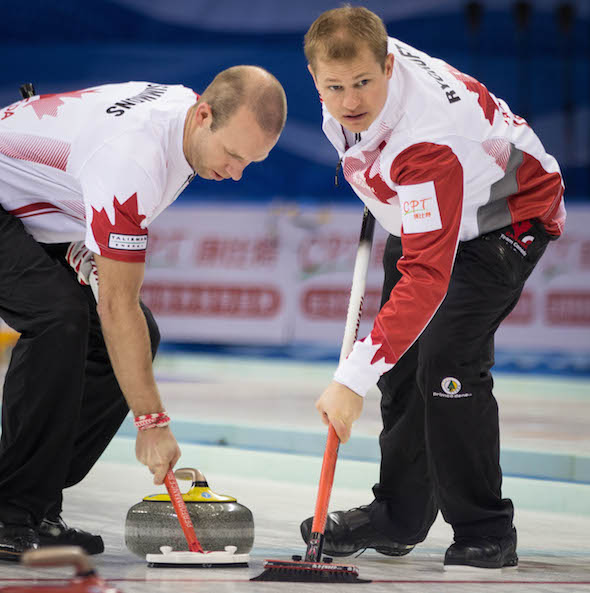 A 7-5 win over Scotland’s Ewan MacDonald on Thursday afternoon at Capital Gymnasium finished off an 8-3 run through the 12-team round-robin standings. That result, combined with China’s Rui Liu beating Japan’s Yusuke Morozumi 6-4, landed the Canadian team — third Pat Simmons, second Carter Rycroft, lead Nolan Thiessen, alternate Jamie King, team coach John Dunn and national coach Rick Lang round out the lineup — in Saturday’s Page 1-2 game against Norway’s Thomas Ulsrud (11 p.m. Friday Eastern, TSN/RDS2). “We woke up today just worried about making sure that we made the playoffs,” said Koe, who won the 2010 World Championship in Cortina d’Ampezzo, Italy. “We lose that game and we could be in a tiebreaker or something. The big thing was just to win and get in the playoffs, and if we were in the 3-4 game, that was fine with us — we’ve done it before. But to get in the 1-2 game, with an extra life? That’s a bonus, for sure.” Norway, seeking its country’s first World Men’s gold medal since 1998, finished first in the round robin with a 10-1 record thanks to a 7-6 extra-end victory over Switzerland’s Peter de Cruz. Canada and Scotland kept things tight for five ends before Canada broke through in the sixth. A wonderful freeze from Simmons set the table for a draw for a pair from Koe to put Canada up 4-2. The Scots rebounded with two of their own in the seventh. Then Koe replied with a wonderful two shots in the eighth — a pair of outturn draws that curled over six feet to manufacture a deuce out of thin air. 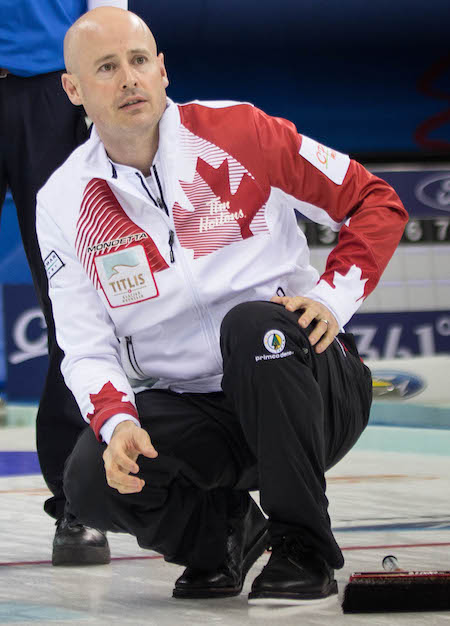 “That’s a spot that we had played a lot the whole game and had a really good idea of line and weight,” said Simmons. “We got a little break when Ewen missed his, so we had the same shot for the deuce, which was great.” Koe finished off the victory with a runback double takeout in the 10th end to hand the Scots their seventh loss in 10 games here. “It seems like all of our games, either we’ve won easy or lost easy,” said Koe. “So it’s good for us to have a battle, tied up or close the whole way through, and to pull it out with a shot in the 10th feels good.” Japan is assured of a tiebreaker berth at 7-4, while China, Switzerland and Sweden’s Oskar Eriksson all head into the late draw with 6-4 records in the battle for spots in the Page 3-4 game Friday at 7 a.m. Eastern. The winner of the 3-4 game will play the loser of the 1-2 game in the semifinal Saturday at 4 a.m. Eastern. The gold-medal game is set for Sunday at 3 a.m. Eastern. “I like where we are, considering how hard we’ve had to battle,” said Koe. “We haven’t always been at our best; if we can find our ‘A’ game in the playoffs, I like our chances. And even if we keep playing the way we are, we’re kind of used to it. I’m looking forward (to Saturday). They’re a great team and obviously they’ve had a great week. I don’t think the first time we played them (Norway prevailed 9-5 on Tuesday) that the score was indicative of the way the game was played; just a couple of missed line calls and it could have been anybody’s game. But I like our chances.” Canada has picked up medals in 12 straight World Men’s Championships and has reached the gold-medal game for nine straight years. “Right now we’ve got two chances to go to the final,” said Ulsrud. “I’ve never been world champion, so that’s my dream.” In the other game Thursday afternoon, Jíri Snítil of the Czech Republic (5-5) shaded Denmark’s Rasmus Stjerne (2-9) 8-7. Sweden’s Oskar Eriksson (6-4), Germany’s Johnny Jahr (4-6), Pete Fenson of the U.S. (3-7) and Russia’s Evgeny Arkhipov (2-8) all had byes in the afternoon draw. For Team Canada updates, go to www.curling.ca. Follow us on Twitter, @CCAcurling. For live scoring, standings and team lineups from the 2014 World Men’s Curling Championship, go to: wmcc2014.curlingevents.com/ The French version of this story will be posted as soon as possible at www.curling.ca/fr