BEIJING — Team Canada is a step closer to the playoffs at the 2014 World Men’s Curling Championship, presented by Ford of Canada. 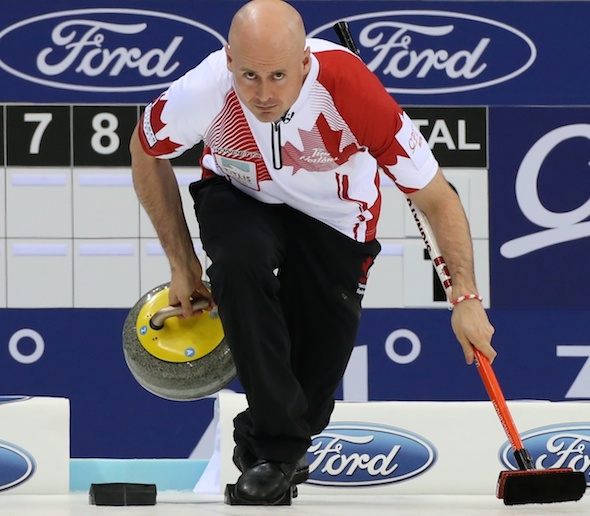 Kevin Koe’s Canadian team from the Glencoe Club in Calgary took an early 9-1 lead through four ends and sailed home with an 11-5 win over Germany’s Johnny Jahr on Thursday morning at Capital Gymnasium to improve its record to 7-3, good enough to assure at least a tiebreaker berth on the final day of round-robin play. The Canadians — the team is rounded out by third Pat Simmons, second Carter Rycroft, lead Nolan Thiessen, alternate Jamie King, team coach John Dunn and national coach Rick Lang — will complete round-robin play on Thursday at 2 a.m. Eastern (live on TSN/tape delay at 7 a.m. on RDS2) against Scotland’s Ewan MacDonald (3-6). A win in that game would nail down, at worst, a berth in the Page 3-4 game (TSN/RDS2, schedule TBD). A victory, combined with Japan’s Yusuke Morozumi (7-3) losing to China’s Rui Liu (5-4), would put Canada in the Page playoff 1-2 game (TSN/RDS2, schedule TBD) against Norway’s Thomas Ulsrud. “It’s good news,” said Koe. “We’ve come through the three-four game a few times with this team (including the 2010 Tim Hortons Brier and the 2014 Alberta men’s championship). We just have to get in there. And once we get in there, that’s usually when our best games show up. We’re pretty much down to our last life here, so we have to come out against a good Scotland team that’s probably going to be playing pretty loose, and take care of business.” 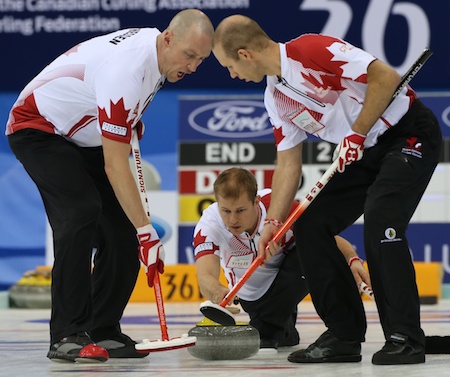 Against Germany, Canada took control early on. Koe was forced to take a single in the first, looking at two German counters, but in the second, Canada turned up the heat. Koe made a precision come-around tap to sit four and block off the path to the four-foot. German last-rock thrower Felix Schulze needed to make a hit-and-roll for a single. Instead, he wrecked on a guard to give Canada a stolen four-ender. “That nice little hack-weight shot Kevin made in the second, that was good for his confidence,” noted Thiessen. “We’ve wrecked a few times on those, so to make one and really put the pressure on him to make a really good shot against four early in the game is good. You’ll get mistakes when that happens, and it got us a little bit of mojo and hopefully we can carry it over this afternoon.” After Germany was forced to a single in the third, Canada, for all intents and purposes, put the victory away with Koe drawing for four in the fourth end. The Germans would cut into the lead with three in the fifth and one more in the sixth, but following a seventh-end Canadian deuce, the Germans, 4-6 with the loss and out of playoff contention, offered handshakes. “We just needed to feel a little bit better about things. But, honestly, last night we didn’t play that bad,” said Thiessen, referring to a loss on Wednesday night to Sweden’s Oskar Eriksson. “He made a couple beauties, and that’s the game, right? We couldn’t buy anything last night to finish off an end, so it was nice to get this one out of the way and guarantee at least something on the weekend.” Norway locked up first place on Thursday morning with a 6-4 win over Pete Fenson of the United States (3-7), while the Swedes (6-4) did Canada a favour with an 11-4 win over Japan; a Japanese win would have all but locked up a spot in the one-two game. In the other game, Russia’s Evgeny Arkhipov (2-8) took two in the 10th end for a 6-5 win over Denmark’s Rasmus Stjerne (2-8). Switzerland’s Peter de Cruz (6-3), China, Jíri Snítil of the Czech Republic (4-5) and Scotland all had byes in the morning draw. For Team Canada updates, go to www.curling.ca. Follow us on Twitter, @CCAcurling. For live scoring, standings and team lineups from the 2014 World Men’s Curling Championship, go to: wmcc2014.curlingevents.com/ The French version of this story will be posted as soon as possible at www.curling.ca/fr