BEIJING — Going the long road to a gold-medal game is nothing new to Kevin Koe. 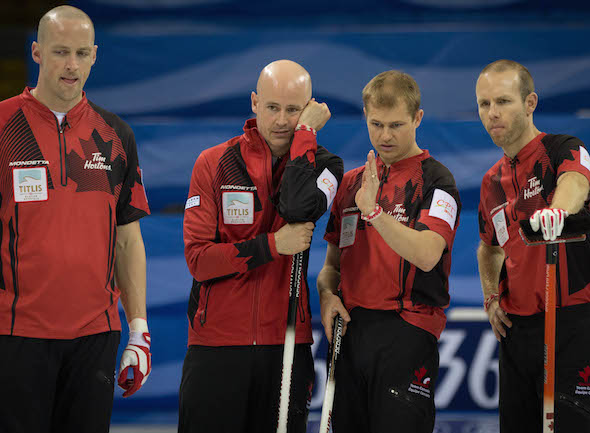 So while losing the 2014 World Men’s Curling Championship, presented by Ford of Canada, Page playoff 1-2 game 3-2 to Norway’s Thomas Ulsrud on Saturday at Capital Gymnasium was disappointing, considering it earned Ulsrud and Co. a day of rest before Sunday’s gold-medal game (3 a.m. Eastern, live on TSN/tape delayed, noon, RDS2), it’s hardly unfamiliar territory for Koe’s Calgary team. “There’s not much of a message to the team,” said Koe, whose team will be back on the ice later today (4 a.m. Eastern, live on TSN; tape-delayed to 6:55 a.m., RDS2) in the semifinal against Sweden’s Oskar Eriksson. “Down to our last life again, and we seem to come up with our best games then. We just have to bounce back and come out and get off to a good start.” Koe and Co. were forced to win semifinals in the Alberta championship as well the Tim Hortons Brier, presented by SecurTek, en route to Beijing. 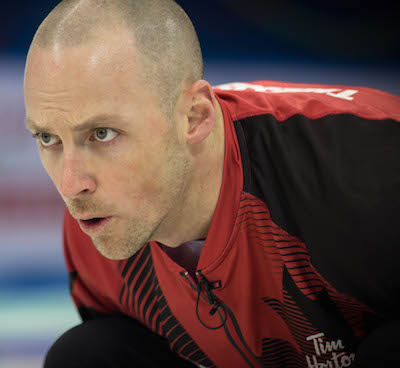 The Canadian team — rounded out by third Pat Simmons, second Carter Rycroft, lead Nolan Thiessen, alternate Jamie King, team coach John Dunn and national coach Rick Lang — kept it tight for seven ends against Norway and was trailing 2-1. But Canada went all out to score multiple points in the eighth and ninth ends, only to let valuable opportunities slip away both times. In the eighth, Koe rolled out his shooter on an open hit attempt to sit three. That allowed Ulsrud the opportunity to make a tough double takeout through the tightest of ports, and forced Koe to blank the end. In the ninth, Koe had another huge chance for two or three, but just missed his hit-and-roll with his first shot, and then was light on his draw to bite the button to score two. “In eight and nine; nine, for sure, that was disappointing,” said Koe. “I threw my first one good; just screwed up the line call. Eight, I had a bit of a miss, but he came up with a really good shot. He made the ones when he needed to and we didn’t, so it’s disappointing.” Canada will have little time to refocus for a Swedish team that beat Switzerland’s Peter de Cruz 5-2 in the Page playoff 3-4 game on Friday night. Sweden beat Canada 6-2 in round-robin play on Wednesday night. 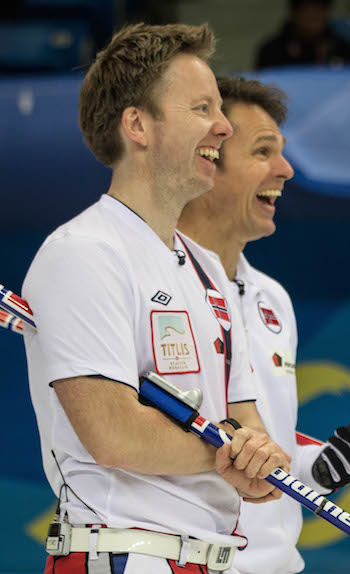 “We let (Norway) off the hook, but that’s the game,” said Thiessen. “You have to stick the knife in when you get the chance, and we didn’t. We played a good game, but a fairly tight game so you’re going to have limited opportunities to really finish a guy off and we didn’t take those chances. Now, we just have to put this one behind us and go out and win the semifinal.” Ulsrud will be seeking his first world championship gold medal in 10 appearances at the event; his previous best finishes were bronze medals in 2009, 2008 and 2006, while the rest of his team (Ulsrud had personal commitments and couldn’t participate) finished second to Koe at the 2010 World Men’s Championship in Cortina d’Ampezzo, Italy. “That’s probably one thing you shouldn’t think too much about,” said Ulsrud of the chance to win gold. “I’m just really happy we’re in the final. We’re a pretty easy-going team; we don’t get too tense, but obviously it would mean a hell of a lot to me. We were really disappointed after the Olympics (where his team finished fifth). We put in a lot of effort this year but a lot of other countries did as well and we ended up fifth, so this is kind of payback for Norway.” For Team Canada updates, go to www.curling.ca. Follow us on Twitter, @CCAcurling. For live scoring, standings and team lineups from the 2014 World Men’s Curling Championship, go to: wmcc2014.curlingevents.com/ The French version of this story will be posted as soon as possible at www.curling.ca/fr