Canada to play for bronze medal at World Men’s Championship

BEIJING — Team Canada will take aim at extending its medal streak at the World Men’s Curling Championship, presented by Ford of Canada, to 13 years on Sunday (late Saturday in Canada) in the bronze-medal game at Capital Gymnasium. 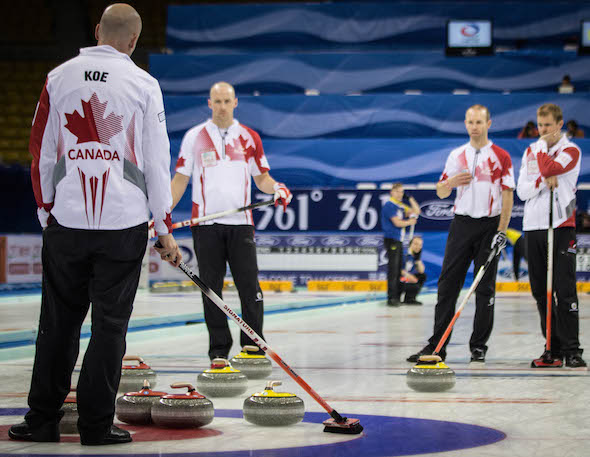 Kevin Koe’s Canadian team from Calgary — third Pat Simmons, second Carter Rycroft, lead Nolan Thiessen, alternate Jamie King, team coach John Dunn and national coach Rick Lang — bowed 10-8 to Sweden’s Oskar Eriksson in the semifinal on Saturday. As a result, the Canadians will take on Switzerland’s Peter de Cruz for the bronze medal Saturday at 10 p.m. Eastern (live, TSN/RDS2). “It was a bad day,” said Koe, whose team was a 3-2 loser to Norway’s Thomas Ulsrud earlier Saturday in the Page playoff 1-2 game. “We played pretty decent for the most part, I thought we were throwing them good. But big misses at the wrong time, and those will obviously kill you in the big games.” 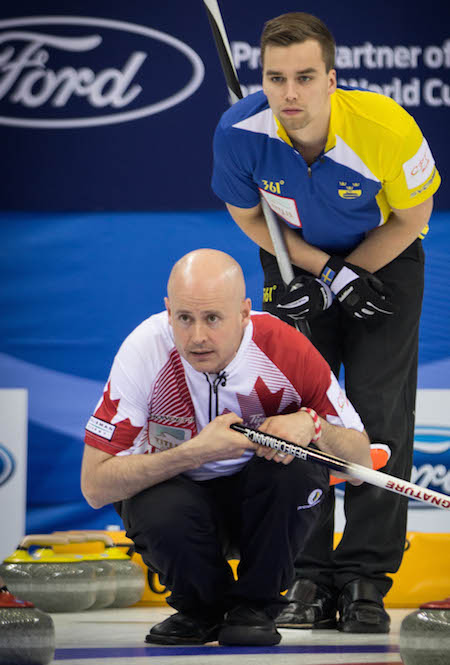 The Canadians couldn’t have asked for a better start against Sweden, cracking a deuce in the first end. But the young Swedes — who claimed gold at the Winter Universiade in December in Trentino, Italy, in addition to the 2011 World Junior Championship — bounced back in impressive fashion as Eriksson hit for a go-ahead four in the second end after Koe’s attempt to freeze buried to a Swedish rock at the back of the button came up short of the rings. “Just one bad miss — that’s all it took,” said Koe. “If I made my last one, we probably only give up one or two. Just a bad miss at the wrong time.” The teams would trade singles the next two ends, but in the fifth, Canada had a shot at a tying pair, with Koe needing to hit a Swedish rock in the top 12-foot and then roll into the paint. But the rock did not roll far enough and the Canadians settled for a single. The Swedes, let off the hook, responded with a textbook sixth and for all intents and purposes put the game away with Eriksson hitting for three when Koe’s last-rock freeze attempt was heavy and bumped into the open. Canada would take two in the seventh and steal one more in the eighth but would get no closer. “I’m a little devastated right now,” said Rycroft. “I don’t know what it was, if it was a lack of confidence on our part or still not trusting the ice. But we missed way too many shots on the wrong side. Good curlers missing easy shots is not going to win you many games.” In the 55 previous editions of the World Men’s Championship, Canada has been on the podium 49 times, including 34 gold, nine silver and six bronze. “We’ll show up and try our hardest to win,” said Koe. “I mean, it’ll be hard, we’re disappointed — we came here thinking we’d be in that gold-medal game. But we’ll be here in the morning and we’ll be trying to win a medal.” 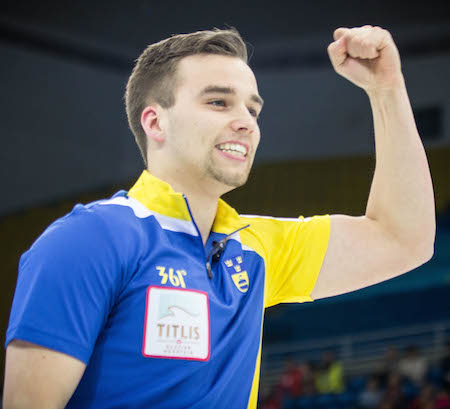 Sweden will play Norway for the gold medal on Sunday (4 a.m. Eastern, live on TSN; tape-delay at noon on RDS2). Sweden’s Niklas Edin won the gold medal at the 2013 Ford World Championship in Victoria, B.C., while the last Norwegian victory was authored by Eigel Ramsfjell in 1988 in Lausanne, Switzerland. “It feels so good – it’s such an awesome feeling, I can’t describe it,” said Eriksson. “We just need to play like we played today and the last five or six games. I think they’re a bit afraid of us. I think we’ve done really, really well so far to get to the final in our first World Championship. If we can defend the title it would mean everything to us.” For Team Canada updates, go to www.curling.ca. Follow us on Twitter, @CCAcurling. For live scoring, standings and team lineups from the 2014 World Men’s Curling Championship, go to: wmcc2014.curlingevents.com/ The French version of this story will be posted as soon as possible at www.curling.ca/fr